DODDS-Europe wrestling championships: ‘The guys who should have won, won’ 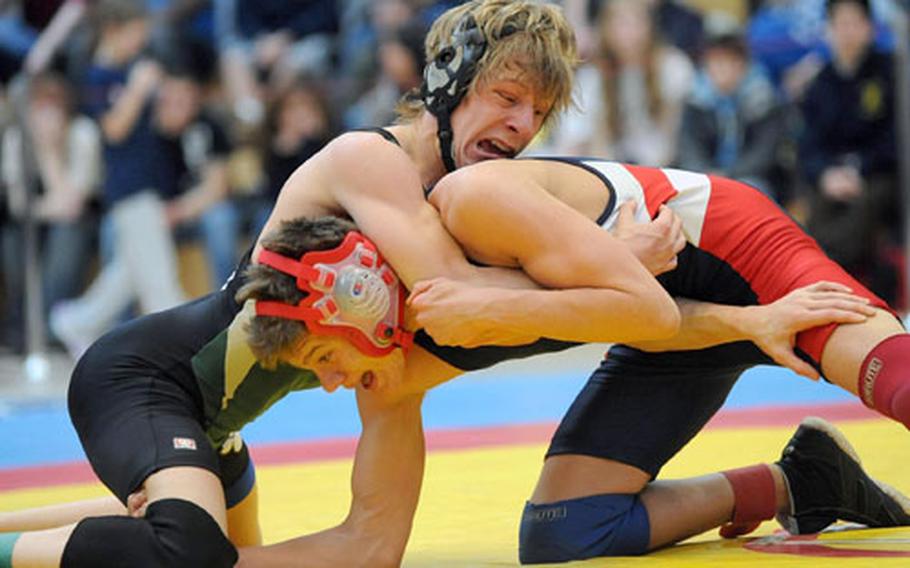 Lakenheath&#39;s Brandon Searle, right, defeated AFNORTH&#39;s J.J. Donohue for the 119-pound crown at the 2009 DODDS-Europe wrestling championships in Wiesbaden, Germany, on Saturday. For a photo gallery of all the finalists, see link at top of story. (Michael Abrams / S&S)

WIESBADEN ARMY AIRFIELD, Germany &#8212; Whether it was one of the three 100-career match winners, or one of the six returning champions, or even one of the four starting quarterbacks who claimed European high school wrestling titles Saturday, things went just as they should in the DODDS-Europe wrestling championships.

"The right guys, the guys who should have won, won," Wiesbaden coach Steve Jewell said at the conclusion of the two-day meet. "The guys who were aggressive won today. Guys who chose to get defensive paid the price."

Jewell was speaking in the wake of Angelo Hall&#8217;s stunning finish at 285 pounds.

"Take that last match," Jewell said of Hall&#8217;s rousing finish. "He just kept going in there."

Hall said he had no choice.

Lakenheath&#8217;s 119-pound champion, Brandon Searle, fended off a takedown try by AFNORTH&#8217;s J.J. Donohue for an agonizing 30 final seconds to preserve a 2-1 victory; returning champion E.J. Ruiz of AFNORTH took Ramstein&#8217;s Matt Lein down with less than 10 seconds left to pull out victory at 140 pounds; Vilseck&#8217;s Tyler Hall, no relation to his 285-pound teammate, struck with 21 seconds left for the takedown that earned him an 8-6 verdict over Joe Witherington of Patch at 160; and repeat champion Dominic Barrale waited until the final two seconds of his 171-championship bout to record his tournament-high seventh fall, this one against Kyle Kaus of Vicenza.

"That&#8217;s the mark of a champion, to win at the end," said AFNORTH coach Greg Blankenship, whose Lions walked off with two individual champions and the Division III team title for the second straight year,

Barrale was in no danger of losing at the end. He led 13-3 when he launched his match-ending move.

The other furious finishes were closer.

Lakenheath&#8217;s Searle survived deep trouble in the closing seconds and the loss of a stalling point while in the advantage position.

Searle also benefited from a wiped-out first-period takedown by Donohue, which turned out upon appeal to have been the product of an illegal dangerous hold. Instead of being down two points, Searle ended up leading 1-0 after the referees finished conferring.

Things were just as tight for Baumholder&#8217;s Edgar Acosta, who held off Aaron Ellis of Brussels 1-0 for almost two periods to win his second straight gold medal here. Because of the pool-play format, Ellis and Acosta were pitted against each other for the second time on Saturday.

"That was a close decision (3-1), too," Acosta said, "but I like the pool format. You get to wrestle people like Ellis twice in one day."

Patch&#8217;s Brennan Lauritzen, just in from New Mexico this school year, preserved his 8-4 victory at 215 with a last-minute, high-crotch takedown of AFNORTH&#8217;s Zach Cooney.

"I was a little scared because we had spent the whole second period on our feet," Lauritzen said. "But once I got that high crotch in, I felt better."

For Tyler Hall &#8212; the Vilseck starting quarterback who joined Barrale, Acosta and Ruiz as signal-caller champions on that mat &#8212; training paid off Saturday and left him with just enough energy to win.

Atonement also figured into Saturday&#8217;s title bouts. Kaiserslautern&#8217;s 103-pound champ A.J. Remo, who came to this meet last year unbeaten only to fail to place, said he was tired as he held on to win 6-4 over Vince Alonso of Brussels.

Grabbing the most revenge on Saturday was AFNORTH&#8217;s Brock Blankenship, ailing all week from a virus. He flattened Ansbach&#8217;s Jarred Jones, the only man to defeat him this season, at 2:24 of their 189-pound finale.

Blankenship&#8217;s was one of seven one-sided matches. Wiesbaden newcomer Drew Polson, a transfer from California, needed just 3:39 to pin Baumholder&#8217;s Steve Richardson at 112; Ethan Montang of Baumholder registered his 27th pin in 29 matches this season at the 3:45 mark of his 130-pound title match against Tahji Peebles of Wiesbaden; Chris Campos of Naples won his third European title and wound up his high school career 107-1 with a 22-7 technical fall verdict over Adam Carroll of Lakenheath at 125; and St. John&#8217;s&#8217; defending champions Chris and Matt Lyon, like Campos 100-match winners, captured their second-straight titles. Chris won at 145, 6-2 over game Matt Seely of Patch, and Matt at 152, 12-0 over Michel Russell of Baumholder.

Divisional titles went to Patch in Division I, Wiesbaden in Division II, AFNORTH in Division III and Brussels in Division IV. In overall terms, however, only Patch, with 182 points, outscored AFNORTH (171) and D-III runner-up Baumholder, which totaled 150. AFNORTH, Baumholder, St. John&#8217;s and Vilseck each crowned two champions, the only schools to do so.