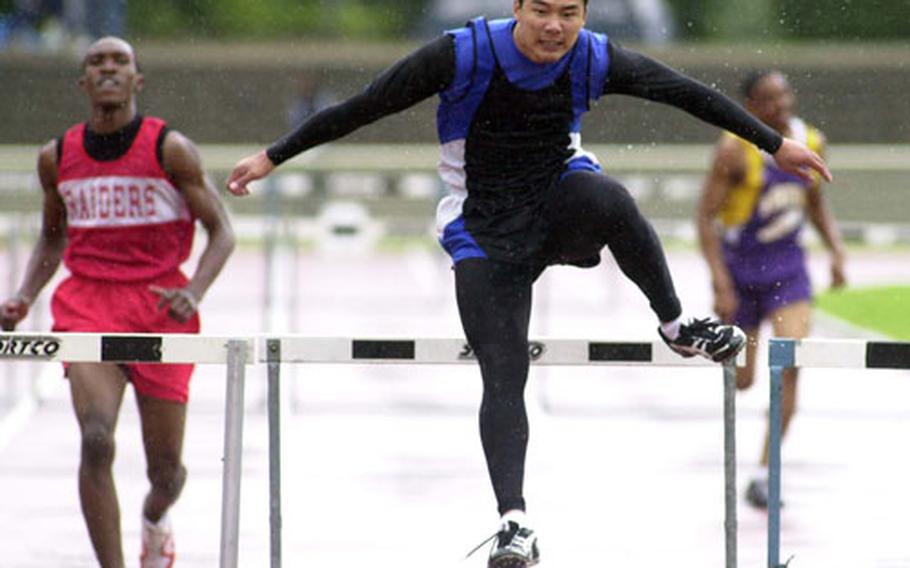 Sung Byon of Hohenfels takes the last hurdle on his way to winning the 300-meter intermediate hurdles event in 41.58 seconds at the DODDS European track and field finals in Wiesbaden on Saturday. (Michael Abrams / S&S)

Sung Byon of Hohenfels takes the last hurdle on his way to winning the 300-meter intermediate hurdles event in 41.58 seconds at the DODDS European track and field finals in Wiesbaden on Saturday. (Michael Abrams / S&S) 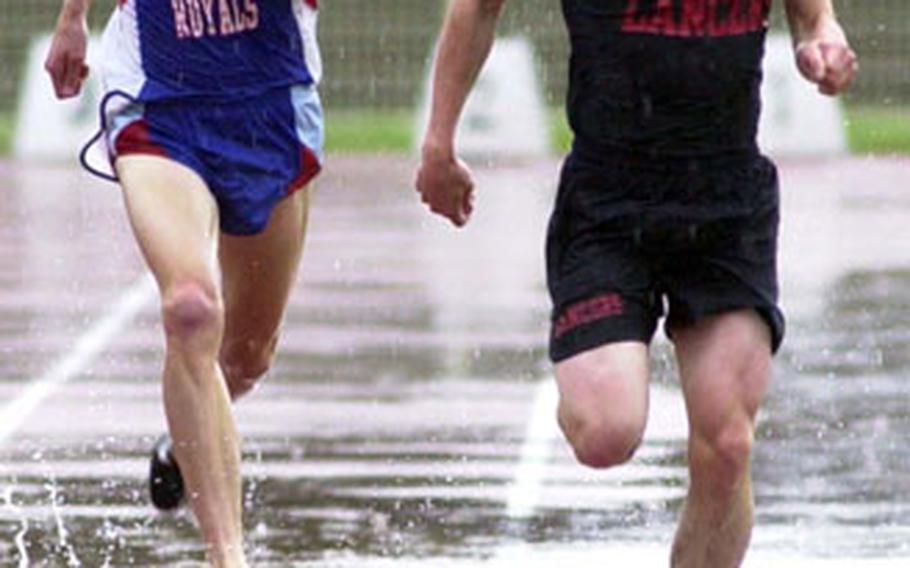 Ramstein’s Danny Edwards, left, and Lakenheath’s Greg Billington are still neck-and-neck as they head to the finish line in the boys 3,000-meter race. Billington won in 8 minutes, 58.30 seconds in an exciting race run in the rain on an extremely wet track. (Michael Abrams / S&S) 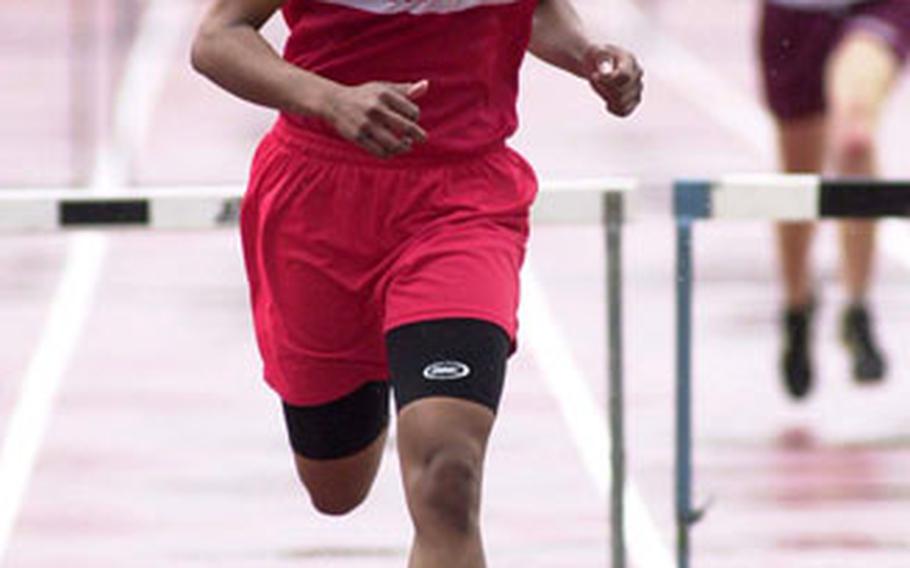 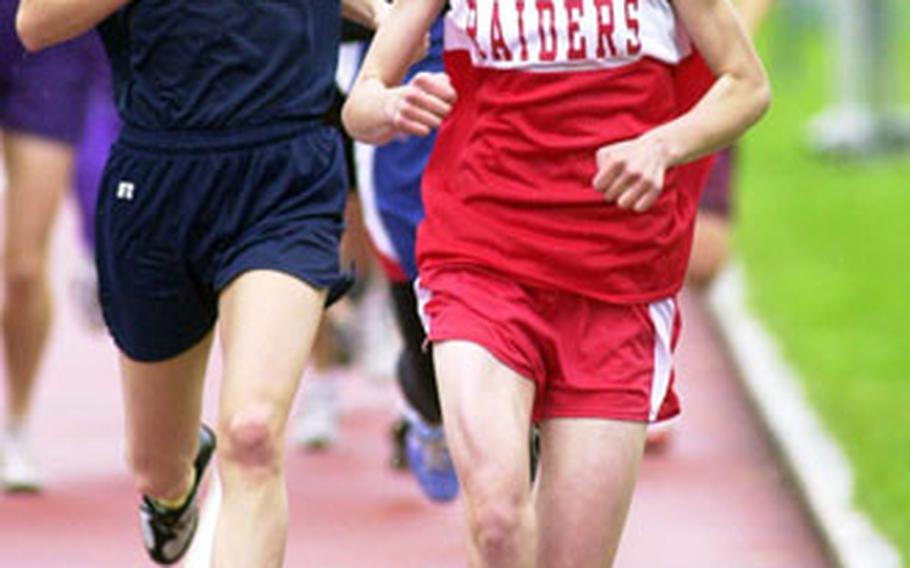 Kaiserslautern’s Colleen Smith leads Chealse Kropushek of Heidelberg and the rest of the runners in the girls 1,500-meter run at the DODDS European track and field finals in Wiesbaden on Saturday. Smith won the race in 4 minutes, 57.05 seconds. (Michael Abrams / S&S) 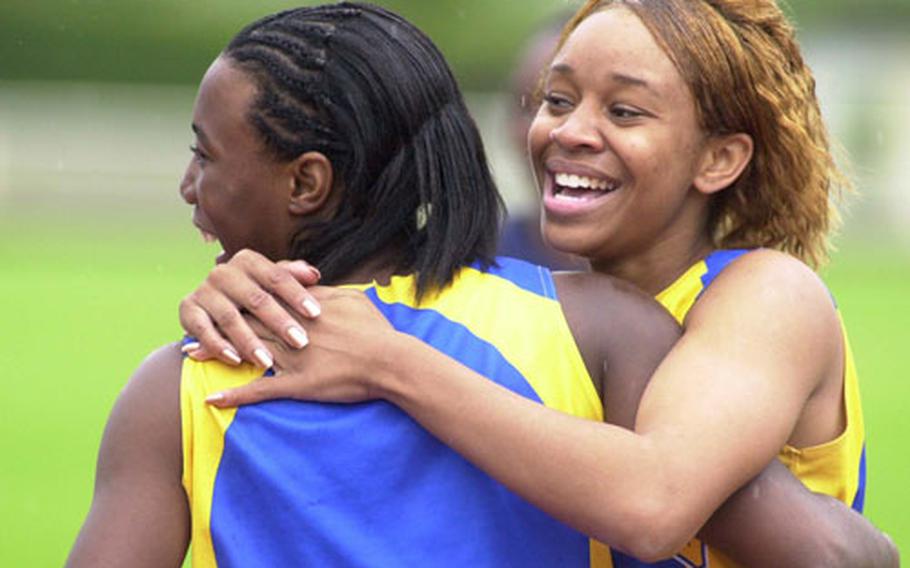 WIESBADEN, Germany &#8212; A soaked track and a nasty wind created problems for some athletes during the second day of the DODDS European track and field championships. The elements didn&#8217;t stop Kaiserslautern freshman Colleen Smith.

Smith breezed to victory in the girls 1,500-meter and 800-meter finals, giving her first-place finishes. The freshman phenom took top honors on Friday in the girls 3,000-meter race.

Smith, 14, voted the girls track MVP, was modest about her impressive debut in the European championships. She&#8217;s only been running for about a year.

The weather cost Kaiserslautern senior Lynndsey Hyter a good shot at the record in the 300-meter hurdles.

Hyter still dominated, taking gold in the hurdles and long jump on Saturday to go along with the triple-jump gold she won Friday. But she was unable to crack that DODDS hurdle record she wanted. She beat the record earlier this month, but there weren&#8217;t the required three watches to officially clock her record time.

On Saturday, Hyter, the girls field MVP, won the hurdles in 46.7 seconds, the fourth year in a row she&#8217;s won the event. Despite not setting a record, Hyter&#8217;s time was one second faster than her time in the 2005 championships.

Still, she looked sullen after failing to break the record.

In other second-day results, the girls of Wiesbaden blasted through the finals of the 400-meter relay. Seniors Courtney Walden, Tiffani Thomas, Shamara Lane and sophomore Charne Donaldson set the best time in five years with a mark of 50.7 seconds.

The boys 400-meter relay was a display of lightning in sneakers. W&#252;rzburg juniors Cameron Huffman, Donald Bryant, B.J. Harvey and sophomore Dominic Lee flashed around the track in 45 seconds.

Aaron Ellison of Hanau squeaked to victory in the boys 200-meter dash. Ellison crossed the finish line just ahead of runner-up Dominique Whaley of Ansbach, in 23.19 seconds. Ellison, voted the boys track MVP, also won the 400.Heidelberg senior Brandon Simmons dominated the boys discus throw with a mark of 130 feet, 2 inches, about 8 feet farther than his nearest competitor. He had won the shot put Friday and was voted the boys field MVPAnne Newman, a Munich International School junior, won the girls high jump with a leap of 4 feet, 10 inches.Whaley, an Ansbach sophomore, won the boys 100-meter dash in 11.48 seconds.After holding back for the initial leg of the race, Hohenfels junior Sung Byon took the gold in the boys 300-meter hurdle.

The hardest part of the hurdles is keeping a proper form, he said.

Byon said he likes competing against his school&#8217;s big rivals from Ansbach, but also enjoys the camaraderie of the championships.