DODDS-Europe soccer: Scoring at premium on Day 1 of tourney 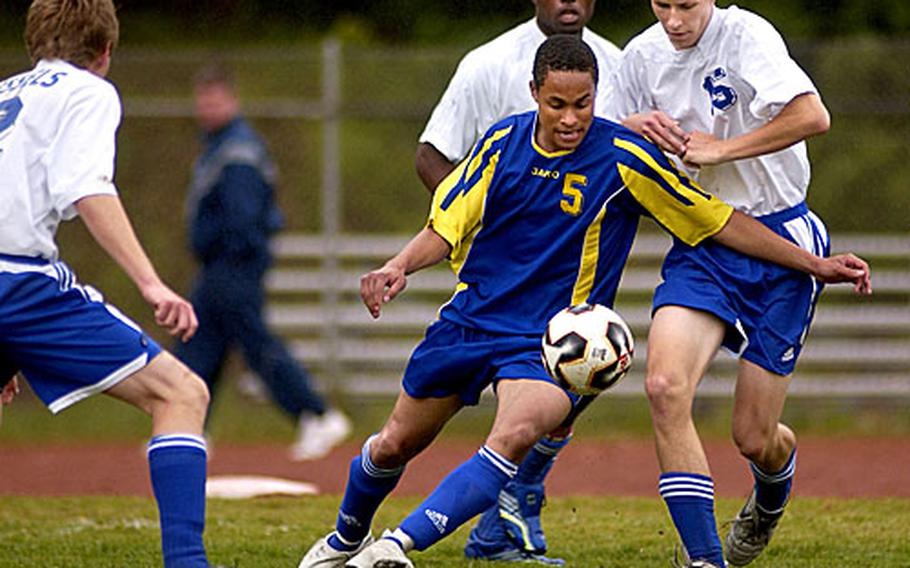 Thomas Pitts from Bamberg fights Marko Podplatnik of the International School of Brussels for the ball Wednesday during opening day of the DODDS-Europe Division IV tournament held in the Kaiserslautern Military Community. (Ben Bloker / S&S)

Thomas Pitts from Bamberg fights Marko Podplatnik of the International School of Brussels for the ball Wednesday during opening day of the DODDS-Europe Division IV tournament held in the Kaiserslautern Military Community. (Ben Bloker / S&S) 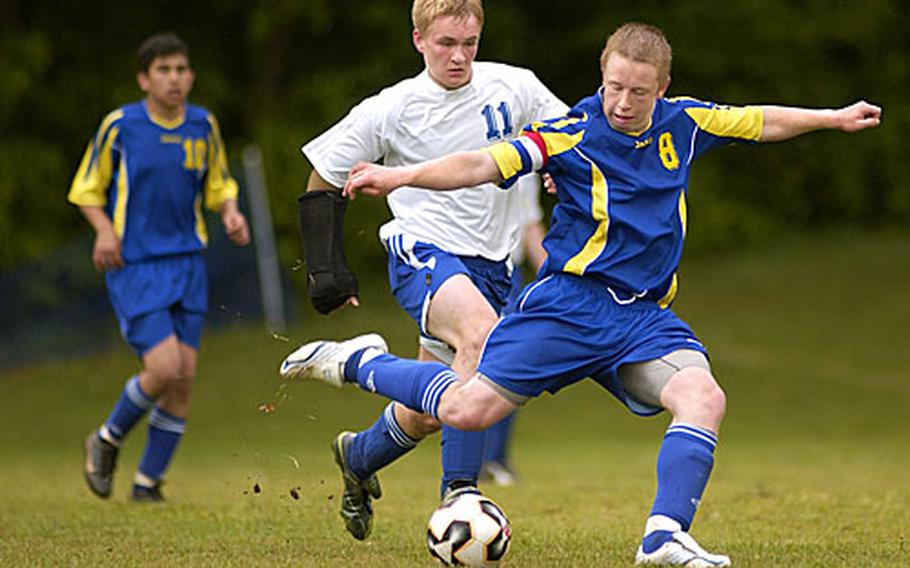 Jake Dominick, front, moves the ball down the field as John Kilroy from the International School of Brussels pursues. Dominick scored one of their three goals giving Bamberg a 3-1 victory over Brussels. (Ben Bloker / S&S) 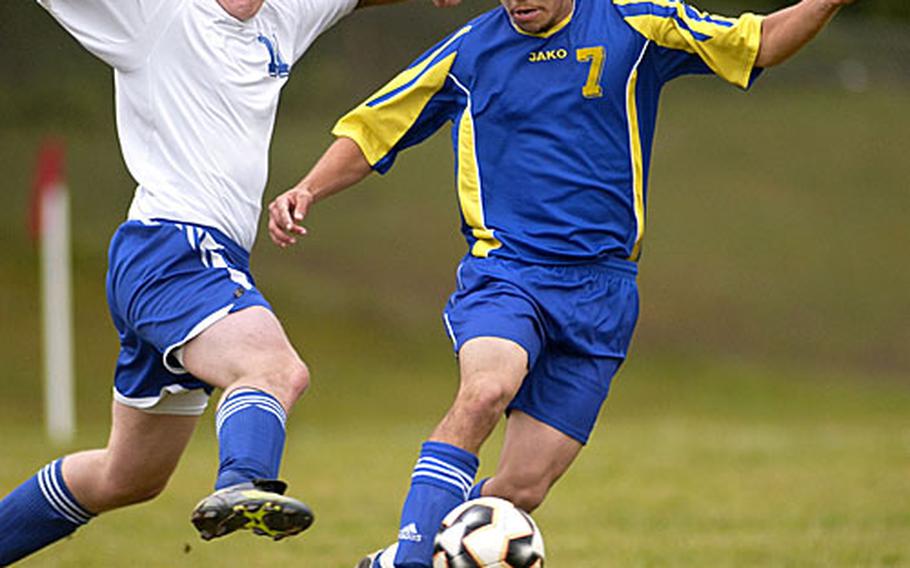 John Kilroy from the International School of Brussels stretches for the ball against Andrew Duque from Bamberg. (Ben Bloker / S&S)

RAMSTEIN AIR BASE, Germany &#8212; Whether it was a match between big schools or small, old rivals or teams from opposite ends of the continent, Wednesday&#8217;s opening day of the four-day DODDS-Europe soccer tournaments was a day for shutouts.

In the first eight games of the Division I and IV tournaments, the Milan, Brussels and Ramstein boys and the Bamberg and Alconbury girls held their opening-game foes scoreless.

On top of that, the Alconbury and Ankara boys posted a double shutout, 0-0.

The shutout was Ramstein&#8217;s second over the Red Raiders on this field in four days &#8212; Ramstein won 3-0 last Saturday in the teams&#8217; final regular-season game, one which looked a great deal like this one, according to Ramstein co-captain Kris Lusk.

Wednesday&#8217;s main change was the 30-minute halves teams play in pool games at the Europeans, 10 minutes shorter than regular-season matches and the semifinals and finals here.

Ramstein and K-town are more than familiar with each other, but that&#8217;s usually not the case among the smaller schools of Division IV.

Andrea Starr scored two goals and assisted on another as the Alconbury girls claimed their first victory over a varsity team this season, 4-0 over Ankara.

Starr said her team&#8217;s unfamiliarity with the Turkey-based team posed no problems.

In the other shutouts, it was Milan boys 7, Lajes 0; Bamberg girls 2, Lajes 0; and Lakenheath girls 3, Wiesbaden 0.

Every team that played Wednesday faced another game later in the day. D-I and D-IV wrap up pool play and hold their semifinals Thursday, with title games scheduled for Friday.

Divisions II and III open their pool-play schedule Thursday and are scheduled to play their finales on Saturday.

And, if necessary, hold something back.