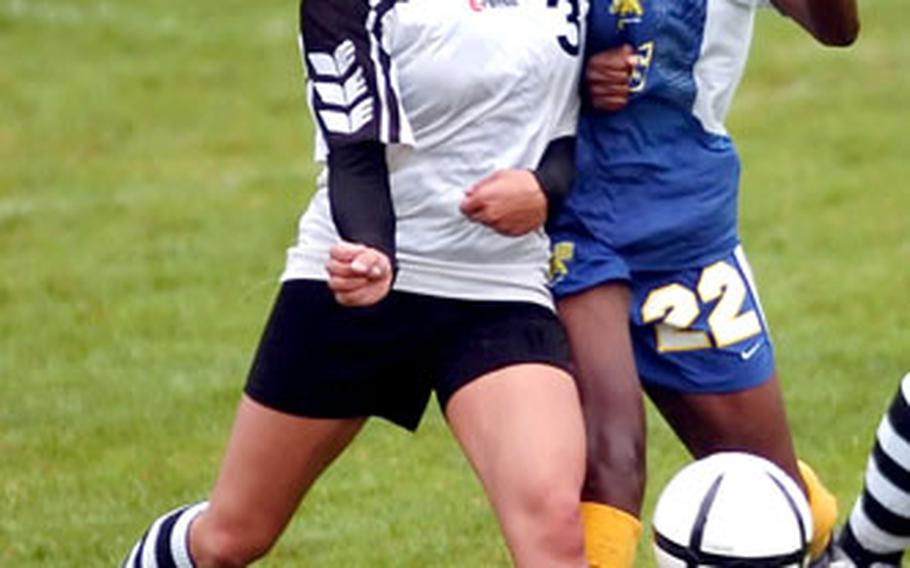 Sigonella gave up only one goal in the tournament.

&#8220;They played a beautiful game today,&#8221; Sigonella coach Shawn McCarthy said of his team. &#8220;Championships are won with defense. This defense allowed our offense to operate.&#8221;

And operate the Sigonella offense did &#8212; despite constant rain, wind and a soggy field.

Sigonella&#8217;s Jaimie Jennett scored the game&#8217;s first goal by blasting a shot that slipped through the hands of the Hohenfels keeper around the 18-minute mark.

Annalisa Gasporra made it 3-0 when she scored from just in front of the net around the 55-minute mark.

Hohenfels nearly scored when a chip shot skipped between the the Sigonella keeper&#8217;s legs and bounced to a stop just before rolling into the net. A defender cleared the ball before Hohenfels could get to it.

Seconds later, Lynch scored her second goal, making it 4-0. She made it 5-0 in the 69th minute when she booted a curling shot into the back of the net.

Late in the game players were colliding and sliding around the soaked filed. One Sigonella player had to be carried off the field after a collision, and was carted off the field on a gurney after the game.

But the defense played through the problems to complete the shutout. &#8220;We stuck with it,&#8221; Sigonella center defender Shirae Gasporra said. &#8220;We held our pressure and won the game.&#8221;