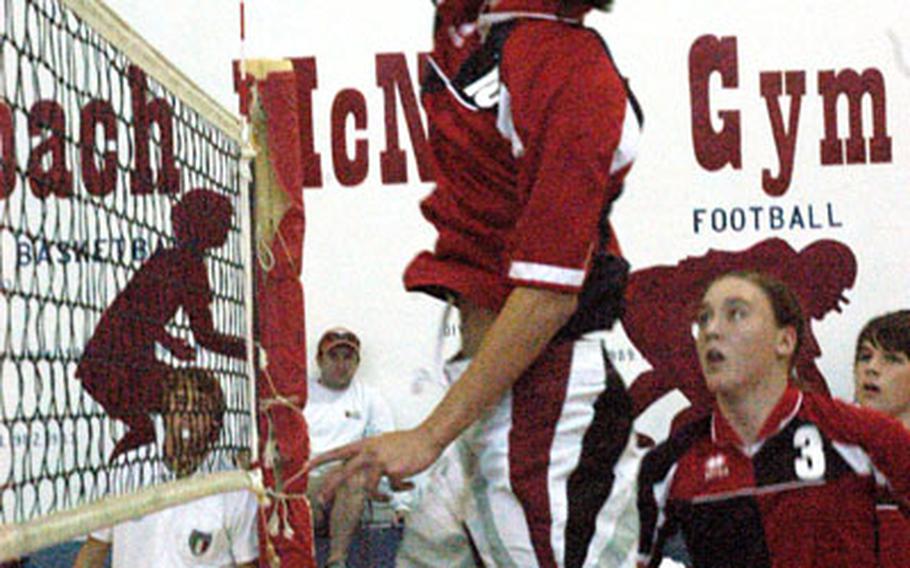 The Milan and Aviano boys volleyball teams had met previously this season. The Saints came out on top, winning in straight games in the final contest before the season-ending tournament began. That helped them take the No. 1 seed in the DODDS-Europe Mediterranean boys volleyball championships.

The experience factor probably helped both schools reach the finals. Six of Milan&#8217;s players are in their final year, and so are seven of Aviano&#8217;s 10 players. Both teams finished second in pool play, but upended the top two schools &#8212; American Overseas School of Rome and Black Forest Academy &#8212; in the semifinals.

Height was definitely in Milan&#8217;s favor Saturday. The team&#8217;s middle hitter, 6-foot-5 John Diatto, towered over the Aviano lineup, none of whom topped 6 feet.

And while Aviano defenders managed several blocks during the day, Diatto&#8217;s final kill &#8212; which went off an Aviano defender and out of bounds &#8212; was the winning point.

Losing isn&#8217;t something the Saints have tasted often. They hadn&#8217;t lost all season until narrowly losing to AOSR in pool play.

Milan had only lost twice entering the tournament, including the defeat to Aviano.

It looked early on as though Milan might turn the tables with a sweep of its own Saturday. Using its height advantage &#8212; and some Aviano lapses in communication that saw the ball drop onto the Saints&#8217; side untouched a few times &#8212; Milan took the first game narrowly. It wasn&#8217;t as close in the second game; Aviano didn&#8217;t get closer than three points after the opening minutes.

But the third game wasn&#8217;t close either, and this time it was the Saints who prevailed. Andy Kretz&#8217;s kill ended it emphatically. Aviano led 22-15 in the fourth game before Milan came back to trail by only two before the Saints closed it out.

The teams exchanged three-point leads in the final game before reaching an 11-11 tie. Milan then won all the key points the rest of the way. Its players and fans ran onto the court &#8212; silencing the hometown Aviano crowd &#8212; after the victory.