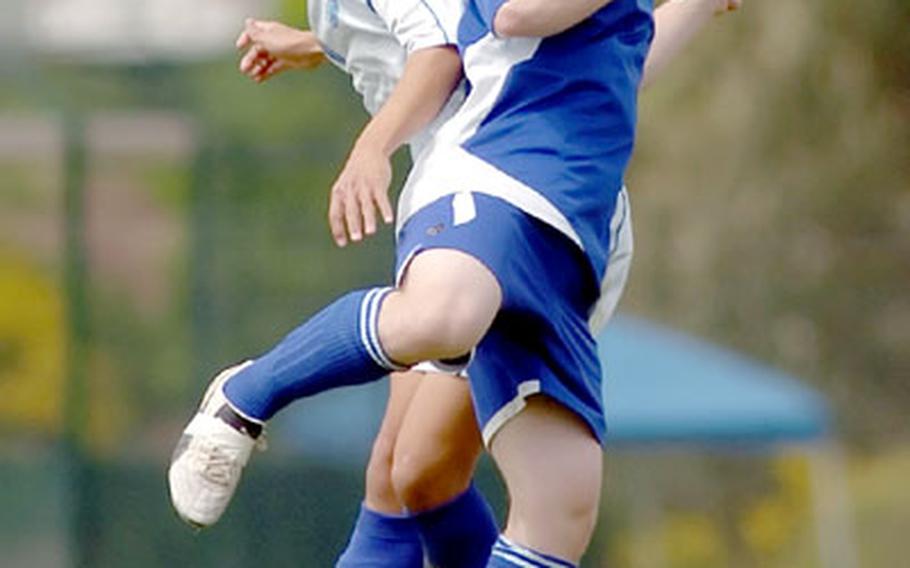 Leo Buscaini took a cross from Guglielmo Carraro on the Panthers&#8217; opening rush, controlled it in the middle of the box and banged it into the upper left corner of the net. Brussels keeper Ethan Hennes had no chance at the blast, and unfortunately for the Brigands, it wasn&#8217;t the last time that happened.

Milan rolled to a 7-0 victory for its second straight Division IV championship.

&#8220;We peaked just at the right time,&#8221; said Milan coach Guy Falconer, whose team looked unbeatable Friday, even though it had lost twice in American Schools in Italy League play this season. &#8220;We tell them it doesn&#8217;t matter what happens during the season, just at the end.&#8221;

In light of the relentless pressure from Milan, the end came quickly for Brussels.

Milan&#8217;s Jun-Won Kim made it 2-0 in the 20th minute, heading in a free-kick cross from Naoki Okamuri. It was the first of four assists for Okamura, who was voted tourney MVP by the coaches.

Milan&#8217;s Paolo Garabaldi made a nice solo run into the box after taking Okamura&#8217;s pass for the goal that made it 3-0 and assisted on Davide Corelli&#8217;s point-blank shot the made it 4-0 at halftime.

Carraro, Colin Falconer and Okamura added goals in the second half to seal the victory.

The title-game loss was the second in a row for Brussels. The Brigands dropped a 1-0 decision to Milan in last year&#8217;s inaugural Division IV championship game.

In Friday&#8217;s other boys play, the Division I championship game between Heidelberg and Ramstein was to begin as this edition of Stars and Stripes went to press in Germany.

Saturday&#8217;s play features the boys&#8217; and girls&#8217; championship games in Divisions II and III. All four title games are scheduled to be played at Ramstein High School, with kickoffs set for noon, 2, 4 and 6 p.m.