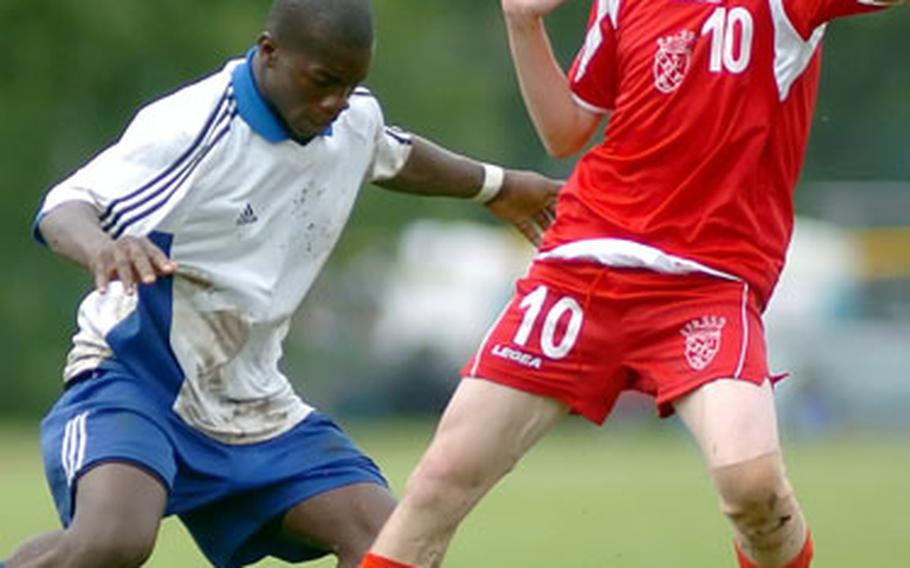 Hohenfels’ Idrissa Soumaroro, left, puts the ball between the legs of American Overseas School of Rome’s Daniel Pinckney during the first half of the European Division III soccer championship in Ramstein, Germany, on Saturday. (Raymond T. Conway / S&S)

&#8220;It was a total team effort,&#8221; said striker Anthony Marshall, who scored twice against the previously undefeated American Schools in Italy League champs. &#8220;Our defense was awesome.&#8221;

And not just on Saturday.

Since the European high schools began playing a separate Division III tournament in 1997, AOSR had won every tournament except one. That lone loss came in 2001, to Milan.

Idrissa Soumaroro stunned AOSR 11 minutes into the game with a shot from 40 yards out that rocketed into the upper left corner of the net past bewildered keeper Alessio Daswani. Daswani was immediately yanked by AOSR coach Andrea Desideri, but substitute Dario Corsetti fared little better.

Marshall dribbled into the box six minutes later, pushed the ball wide of a diving Corsetti and put Hohenfels up 2-0. Marshall, who was voted the tournament MVP, made it 3-0 20 minutes later, working a combination play perfectly with Soumaroro. Soumaroro&#8217;s foot skills left Hohenfels attackers free all afternoon, and his quick changes of direction drew four and even five defenders.

Three goals were plenty for the Tigers&#8217; defense and Tsesmelis.

Tsesmelis, largely unpressured during the first 40 minutes, made a diving save on a dangerous AOSR corner two minutes into the second half. After Tsesmelis tried to punch the ball clear, AOSR pushed a ball toward the goal line, but Pietras cleared it off the line. A second rebound came Tsesmelis&#8217; way, and he dived on it.

&#8220;Some of us have been preparing for this one game since the beginning of the school year," Pietras said.