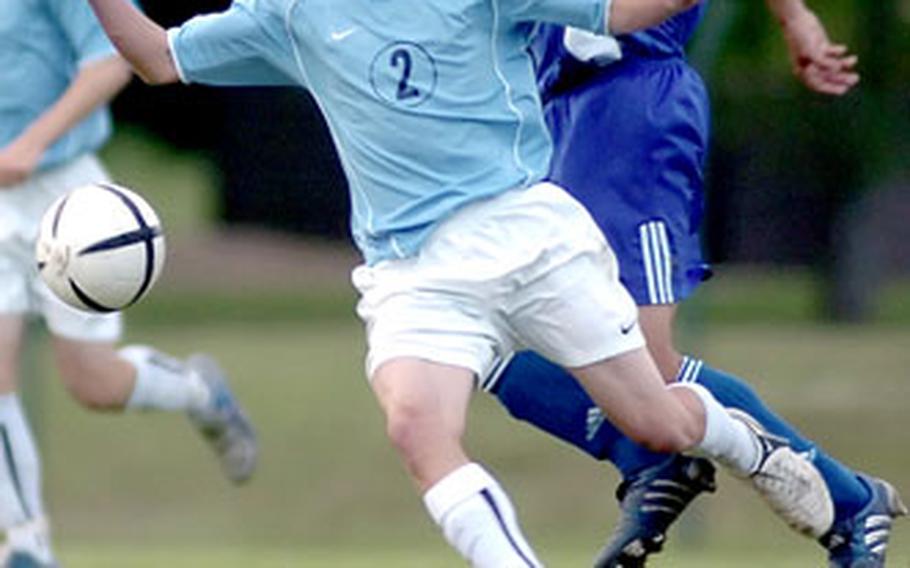 RAMSTEIN AIR BASE, Germany &#8212; Freshman Vince Crepeau scored three goals Friday night to propel Heidelberg to a 4-1 victory over defending champion Ramstein and its ninth European Division I boys soccer championship in the past 10 years.

Kerber scored Heidelberg&#8217;s fourth goal, a penalty kick awarded after he had been pulled down in the box &#8212; not for the first time Friday &#8212; with 20 minutes left in the game. His score was mainly academic, as the Heidelberg back line and swarming defensive midfielders limited Ramstein to only a half-dozen or so chances.

With the defense defusing things at midfield, Heidelberg essentially put the game away with two Crepeau scores in the final five minutes of the first half. Niklas Stephensen got the ball to a closely marked Crepeau in the box, and the freshman sizzled the ball into the lower left corner of the net.

Three minutes later, Crepeau dribbled into the box and flicked a shot off the outside of his right foot just inside the post.

&#8220;Those goals motivated us a lot,&#8221; said Crepeau, who added his third goal on a 35-yard shot taken while making a breakaway run 11 minutes into the second half.

Ramstein&#8217;s score came via a penalty kick by Sean Bannister after Heidelberg was called for a hand ball with 25 minutes left in the game.

It was a rare mistake for Heidelberg, which was eliminated in the semifinals last year by Lakenheath as its string of eight consecutive championships ended.

Heidelberg was playing without two starters, both lost because of events in the Lions&#8217; 5-0 semifinal victory Thursday over Wiesbaden. Midfielder Alex Boehme suffered a groin injury in the first half, and midfielder Matt Orlowski was ejected for unsportsmanlike conduct in the second. The Lions played as though they didn&#8217;t miss the two players.

Despite the two goals just before halftime, Ramstein sustained its pace throughout.