Boys soccer Athlete of the Year 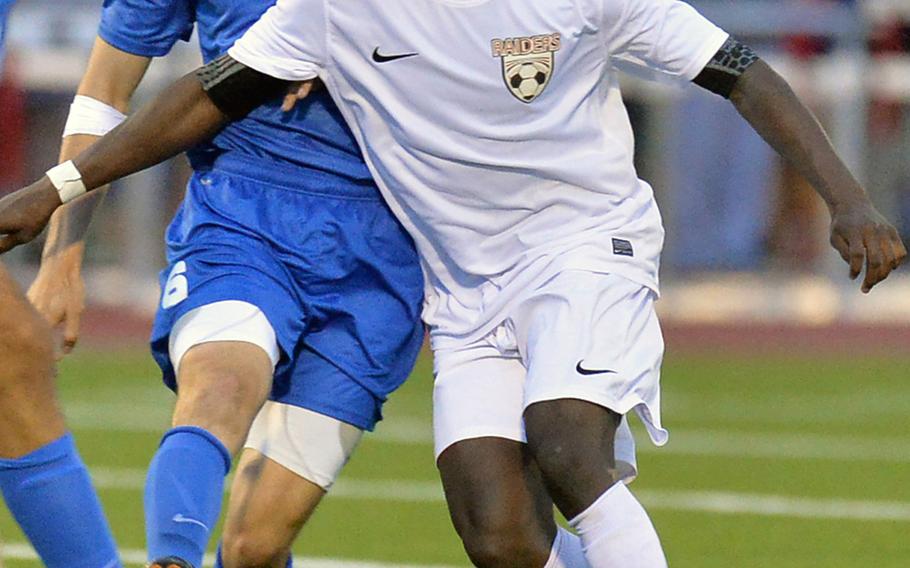 Alexander Dexter scored four goals in the last two games before Kaiserslautern was eliminated from boys soccer title contention this spring. Those goals weren’t quite enough to deliver on the Raiders’ ultimate goal. But they were plenty to announce a major rising talent on the DODDS-Europe scene.

And to crown the 2015 Stars and Stripes boys soccer Athlete of the Year.

But when Dexter thinks back to that eventful week, his thoughts turn to what might have been.

“It was a good performance, but I was hoping for the win,” Dexter said. “That’s what I was worried about was the team performance, not really mine individually.”

Kaiserslautern played admirably in the tournament. The Raiders advanced to the semifinal round by tying top-seeded Naples 2-2, with Dexter supplying both Kaiserslautern goals. The pool’s mathematical tiebreaker placed the Raiders against International School of Brussels with a title-game berth on the line.

ISB threatened to build a substantial lead early in the semifinal. But two sudden goals by Dexter — a penalty kick, followed almost immediately by a screaming line drive out of a sharp spin from the wing — kept the Raiders in contention deep into what eventually became a 5-3 ISB win.

The quick-hitting pair of goals was a signature moment in Dexter’s young prep career. But for those who’d been paying close attention, Dexter didn’t need such an introduction.

As a freshman, the striker played a key role on a team that reached the Division I championship match. He even scored in the final, a 4-3 win for Ramstein, and began a streak of Division I all-tournament selections that he continued this spring.

Two stirring years of soccer have established Dexter among the best in DODDS-Europe. But the 16-year-old sophomore remains hungry for more.

In conversation, Dexter quickly glosses over the things he’s good at on a soccer field — and that list is considerable — in favor of things that he wants to improve.

He wants to use both feet more effectively, as he currently tends to favor his left. He acknowledges that he’s not great at heading the ball. More than anything, he wants to upgrade his on-field “awareness,” making himself more of an overall playmaking threat rather than a pure finisher.

Those weaknesses are likely to fade away as Dexter continues his DODDS-Europe career, complemented by increasingly competitive offseason club play. He’s already improved since his freshman year, he said, learning to steadily increase the level of panic he can cause in a backpedaling back line.

“I’ve gotten better with my positions on the field, my striking skills, being more assertive,” Dexter said.

Perhaps Dexter’s most formidable weapon is his ability to draw quality shots out of what’s called “open play,” as opposed to set pieces like free kicks and corner kicks. Many DODDS-Europe teams depend on the latter to produce shots on goal; Dexter specializes in coaxing open looks from open play.