Despite penalties, Humphreys rolls over Daegu 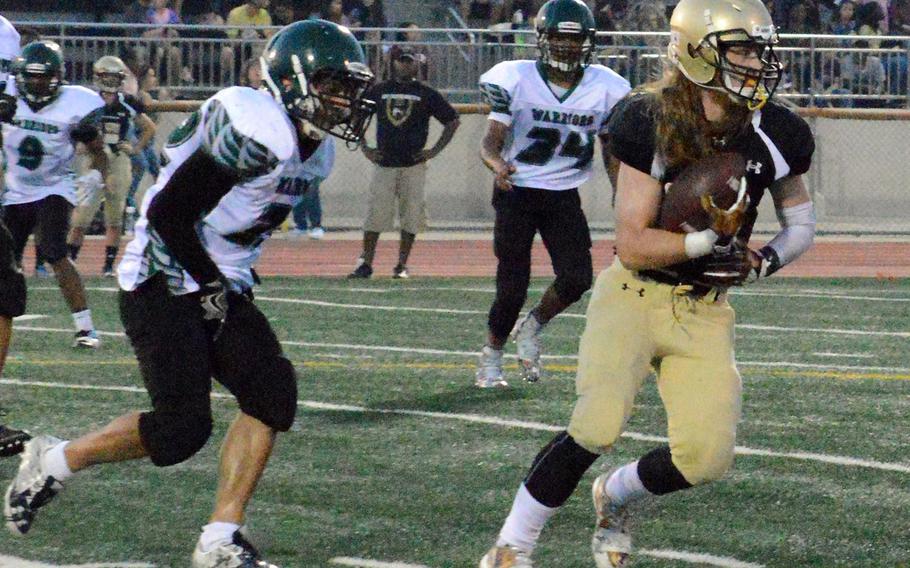 Daegu's Bishop Fields rolls out of the corner of the end zone after scoring a touchdown, as Humphreys' Owen "Thor" Williams and Daegu teammate Sheppard Heib follow during Friday's football game, won by the Blackhawks 40-8. (Mary Sarantakes/Special to Stripes) 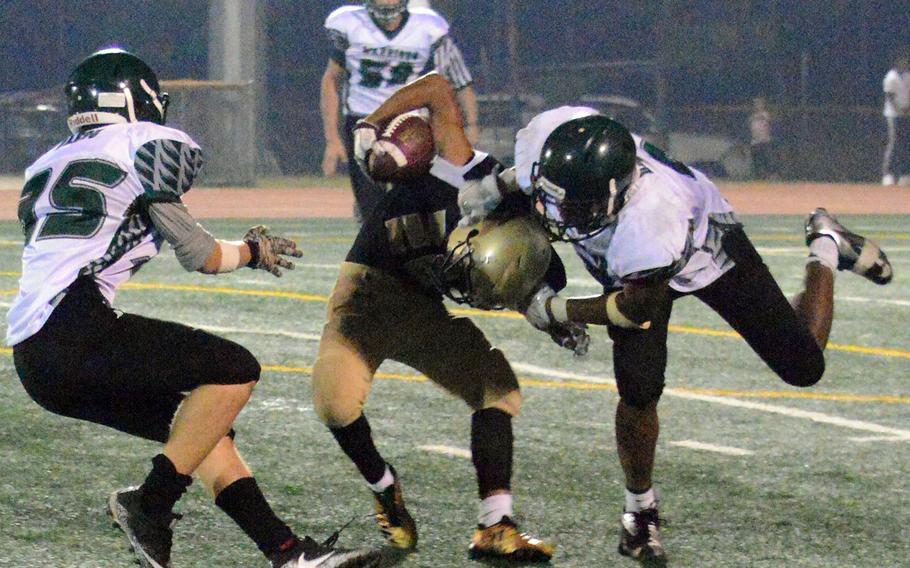 CAMP HUMPHREYS, South Korea — Though the first of two games to determine home field for the Far East Division II football final resulted in a one-sided win over Daegu, coach Steven Elliott said he was far from satisfied.

“We had way too many penalties,” Elliott said after Miles Brice threw for three touchdowns and David Key ran for two in the Blackhawks’ 40-8 home romp over the Warriors on Friday at Blackhawks Field, a game in which Humphreys had six touchdowns called back on penalties.

Humphreys improved to 3-0 overall and took the first step toward a return to the Far East D-II final the weekend of Oct. 27-28. The teams play again at Daegu on Oct. 20. Humphreys lost the D-II title game 44-6 last Nov. 5 at Matthew C. Perry; this year is Korea’s turn to host.

But Elliott said his Blackhawks need to work on “avoiding costly penalties” in that second go-round as well as every game they play the rest of the way. Humphreys has next week off, then travels to Robert D. Edgren on Oct. 6 and to Perry on Oct. 13.

“It could have been a whole lot worse,” Elliott said. Humphreys was flagged 11 times for 110 yards and had four rushing touchdowns, a kick-return TD and a punt return for a score negated by penalties.

“Holding, blocks in the back, that sort of thing. We need to work on discipline. They know. When they come out, they have to always play four quarters, no matter what adversity. They have to keep doing what they do, stick with the game plan, just keep working.”

That said, Humphreys continued to look like the team that led DODEA Pacific in scoring defense a year ago. The Blackhawks had eight tackles for losses, including a sack and Erich Gries’ first-quarter tackle in the end zone for a safety that put Humphreys ahead to stay 2-0.

The offense took over from there. Brice was 6-for-14 for 176 yards and three touchdowns and ran three times for 51 yards. Key had 101 yards on eight carries and two scores and Josh Weaver 58 yards on seven carries.

Sh’voda Gregory Jr. caught two passes for 81 yards and a touchdown and returned a pick-six 81 yards. Owen “Thor” Williams had two catches for 36 yards and a score and Kedarian Key, David’s cousin, had but one reception, but it went 50 yards for a touchdown.

Humphreys raced ahead 40-0 before the Warriors (2-2) finally broke through when Bishop Fields rushed for a fourth-quarter touchdown.

Fields ran 20 times for 182 yards and also had an interception. Javeon Bell, the team’s leading rusher, was injured early on and had just 50 yards on six carries in limited action.

“We didn’t quit. We played down to the last play,” said coach Blake Sims. Daegu was flagged just twice for 10 yards; penalties had hurt in its last two games. “We got that squared away,” Sims said.

Daegu needs to “work on blocking and picking up the blitzes; those hurt us tonight,” Sims said.

Daegu returns home to host Osan American at 6 p.m. Friday and will get back three players who were injured in previous games, plus a newly arrived transfer who should have his 10 practices by then. “We should be OK,” Sims said.