Okkodo receiver Samiyen Lairopi stretches for the ball as Guam defender Will Sanders watches during Friday's football game, won by the Panthers 30-0. (Donna Rhodes/Special to Stars and Stripes)

Okkodo receiver Samiyen Lairopi stretches for the ball as Guam defender Will Sanders watches during Friday's football game, won by the Panthers 30-0. (Donna Rhodes/Special to Stars and Stripes) 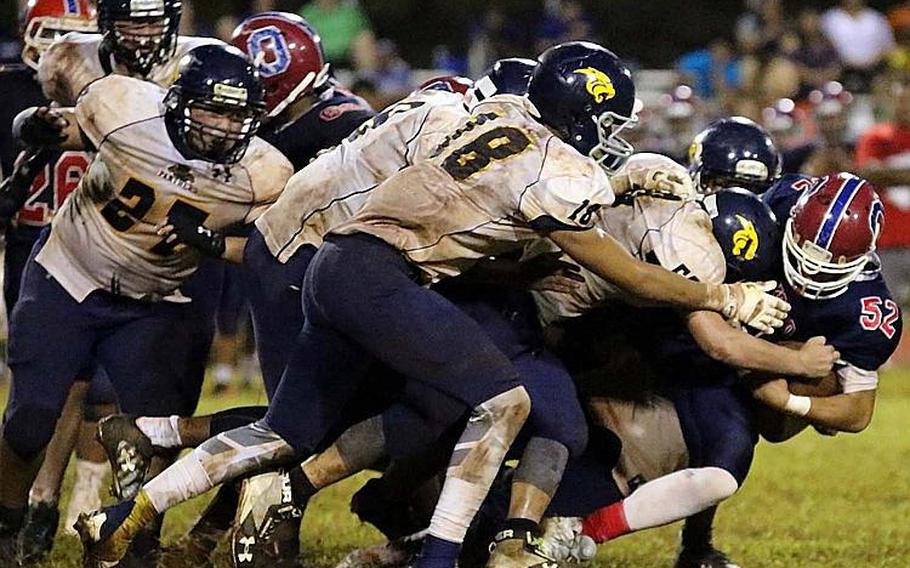 Okkodo ball carrier Ethan Sanchez gets dogpiled by a pack of Guam Panthers during Friday's football game, won by the Panthers 30-0. (Donna Rhodes/Special to Stars and Stripes)

DEDEDO, Guam — With injuries abounding on offense, and the team on a three-game losing streak, Guam turned to its defense to secure what coach Jacob Dowdell called a “much-needed” win for the Panthers over Okkodo.

RaSean Jacobs rushed for three touchdowns, but his bigger number was on defense, where he recorded 14 tackles. Jaylyn Dowdell returned from injury to add 12 tackles, including two sacks, and the Panthers blanked the Bulldogs 30-0 to improve to 2-3 on the season. Okkodo fell to 1-3.

“It was a good night for our defense,” the elder Dowdell said of his Panthers, who held the Bulldogs to less than 50 yards of offense.

It was the second time this season Guam’s defense shut out an opponent. The Panthers won their season opener 8-7 over Tiyan, a game in which the Titans scored on a fumble recovery in the end zone.

“We shut them out in every sense of the word,” Dowdell said of Friday’s victory. “The defense is playing really good football.”

Jacobs was 10-for-14 passing for 212 yards, with five catches each by Makoa Bamba — also back from an injury — for 131 yards and Will Sanders for 81 yards. Jacobs ran eight times for 76 yards and three scores. Sanders added a rushing touchdown.

And the Panthers also broke a nine-year school record, as Tyrone Rosario returned a kick 99 yards for a touchdown. That broke the school record of 85 yards, set in 2008 by DeAndre Weaver.

The Panthers face an especially tough test in their next game, at 3 p.m. Sept. 30 vs. George Washington at University of Guam. But with their season finale Oct. 6 at home against Southern, Dowdell said it’s not hard to envision a rebuilding team going into the playoffs 3-4.

“We use the season to gain the experience, to grow them to an understanding of how to play the game,” Dowdell said. “We have our minds on the playoffs,” which begin Oct. 13.