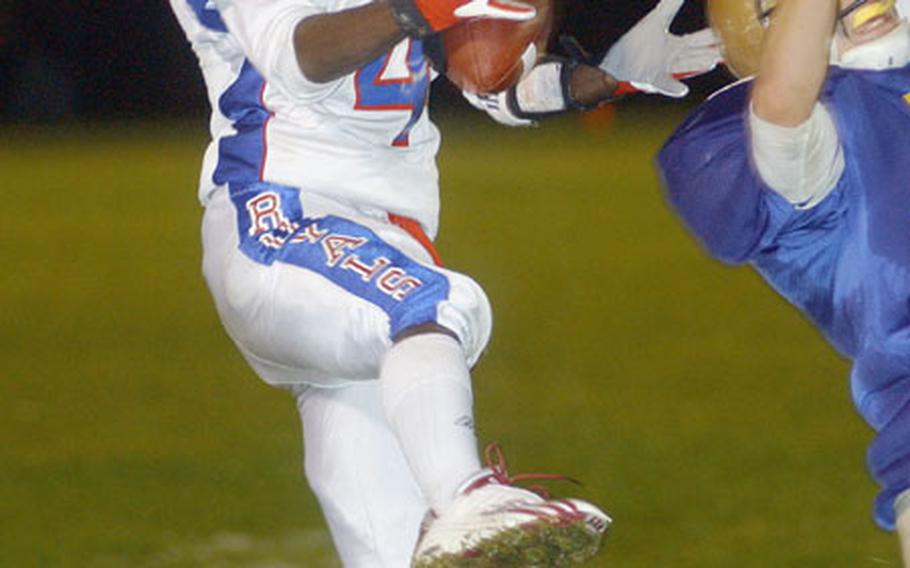 Ramstein&#39;s Keeshawn Carr, left, makes a spectacular catch over a diving Jerry Kelly of Wiesbaden for a 26-yard gain late in the 3rd quarter of the DODDS Division I Football Championship game in Baumholder, Germany, on Saturday. (Raymond T. Conway / S&S)

Ramstein&#39;s Keeshawn Carr, left, makes a spectacular catch over a diving Jerry Kelly of Wiesbaden for a 26-yard gain late in the 3rd quarter of the DODDS Division I Football Championship game in Baumholder, Germany, on Saturday. (Raymond T. Conway / S&S) 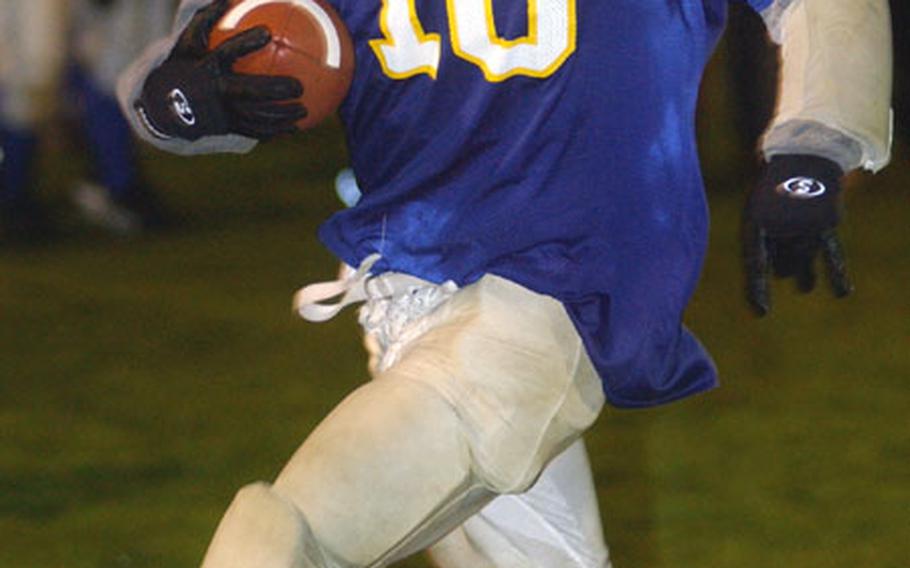 Wiesbaden&#39;s Edmond Woods breaks free for a 25-yard touchdown run that was called back due to a personal foul penalty in the third quarter of the DODDS Division I Football Championship game against Ramstein in Baumholder, Germany, on Saturday. (Raymond T. Conway / S&S) 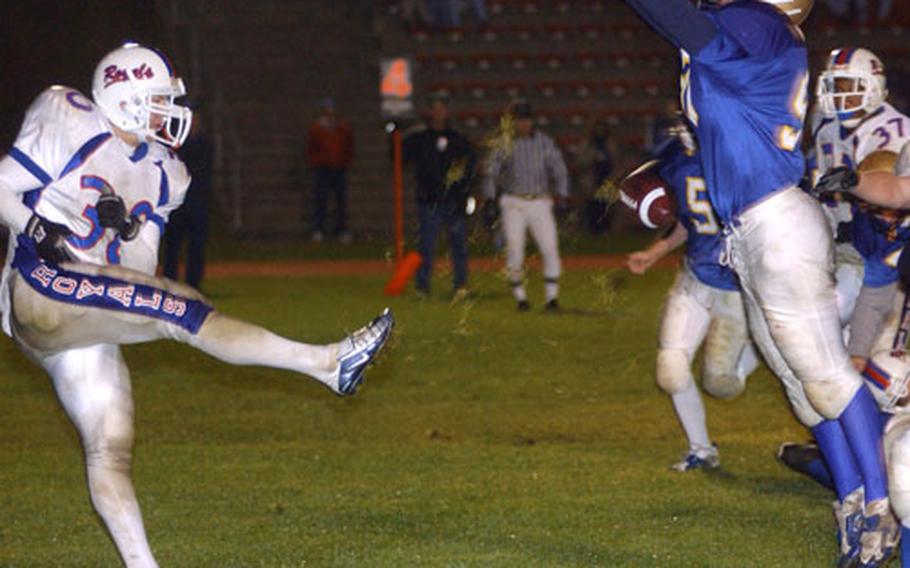 Punting from the back of his own end zone, Ramstein punter Austin Izzo, left, narrowly gets the kick past a leaping Scott Pangrazzi of Wiesbaden in the fourth quarter of the DODDS Division I Football Championship game in Baumholder, Germany, on Saturday. (Raymond T. Conway / S&S)

&#8220;The defense played a helluva game,&#8221; said the Ramstein junior linebacker and most valuable defensive player of the game.

Greeley was speaking of his defensive unit, but he might just as well have spoken in the plural.

Both defenses played a helluva game.

Except for first-half touchdown passes by each team, here&#8217;s how hellacious those defenses were:

The Royals forced a punt on the first Wiesbaden possession of the half, ended a 43-yard Warriors drive by recovering a fumble on the Royals&#8217; goal line, intercepted a pass on the Ramstein 25 and stopped the Warriors on downs inside the Ramstein 30 twice in the fourth quarter.

Wiesbaden scored on a 44-yard drive capped by a four-yard Steve Jewell TD pass to Paul Fry with 4:35 left in the half. But the extra-point kick sailed wide left, and the Royals spent the rest of the game making the miss stand up.

More importantly, Ramstein had three key takeaways. The first was the first-quarter recovery of the muffed punt that led to Ramstein&#8217;s only score.

The second was the goal-line fumble by Jewell on second-and-goal from the 3.

&#8220;That was our first fumbled snap of the season,&#8221; Wiesbaden coach Darryl Schwartz said.

The third came when Irwin picked off a Jewell pass in the flat on the Ramstein 25 to stop another Wiesbaden drive.

The Warriors also hurt themselves when a personal-foul penalty away from the ball erased an apparent third-quarter TD run by Woods.

Even so, the Warriors sacked Irwin eight times, five by Stephen Barber.

Wiesbaden limited the Royals to seven third-quarter snaps, but one proved crucial. Irwin, who was 5-for-13 for 24 yards, lofted a wobbly floater from his own 6.

&#8220;The ball slipped out of my hand,&#8221; said Irwin, who saw Wiesbaden defensive back Jerry Kelly closing in for the pick 15 yards down the field on the left sideline.

The ball, however, slipped between Kelly&#8217;s arms, and Carr was there to gather it in for a 26-yard gain that allowed the Royals to avoid having to punt out of their end zone.

The Royals weren&#8217;t as lucky in the final period, when on third down Irwin was sacked inches shy of a safety. Izzo punted from just inside the end line and barely got the kick off. The punt rolled out to the Ramstein 38.

The victory allowed the fourth-seeded Royals to win their seventh European football title since the school opened in 1982, and their first since 1996.

It was an improbable end to a season that saw Ramstein go 2-3 in league play, including a 31-7 embarrassment at Wiesbaden on Sept. 20. Even so, the Royals didn&#8217;t doubt they could win it all, Greeley said.