Defending champs will have to overcome large turnover 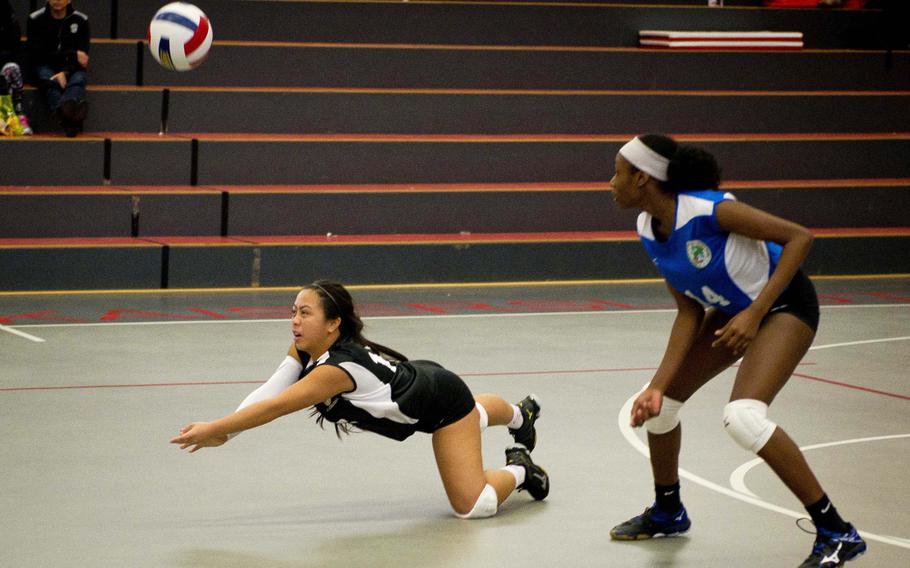 Ramstein's Cristeana Reyes, left, dives for the ball as Aviano's De'Jah Tripp watches in Kaiserslautern, Germany, on Saturday, Nov. 12, 2016, during the DODEA-Europe volleyball All Star match. (Michael B. Keller/Stars and Stripes)

DODEA-Europe’s three defending volleyball champions are in various states of rebuilding this fall, leaving a continent full of contenders in position to build a championship-worthy team to replace them.

The 2017 DODEA-Europe volleyball season opens Saturday with a full slate of matches stretching from England to southern Italy. The regular season runs just under two months, culminating with the annual European tournament Nov. 2 through 4 in the Kaiserslautern Military Community.

The Division I Stuttgart Panthers, Division II Spangdahlem Sentinels (formerly the Bitburg Barons), and the Division III Sigonella Jaguars will need to overcome considerable personnel losses and opponents eager to supplant them as they defend their respective titles.

Division I Stuttgart has been in the situation before.

The Panthers put together a dominant title run in 2015, but lost all but a handful of the players responsible for it the next season. Regardless, Stuttgart rebuilt on the fly, formed another elite group of athletes and successfully defending its crown.

Stuttgart faces a similar scenario this fall as it chases a third straight title minus many of the leaders of the previous year’s championship roster. But the Panthers enjoy a reasonable level of continuity with four starters back, and middle hitters Carly Sharp and Meadau Cunningham and outside hitters Geneva Barriger and Bella Brandt provide a formidable foundation for the project.

Lakenheath has six returning varsity players, including standout junior outside hitter Maya Hagander, and faces a tougher than usual regular-season slate that should serve to prepare the team for the rigors of the European tournament.

Wiesbaden, the last team to win a European title before Stuttgart’s two-year reign, should also be heard from this fall, along with steady contenders SHAPE, Vilseck and Vicenza. Kaiserslautern will look to bounce back from a winless 2016 campaign.

The former Bitburg Barons are now the Spangdahlem Sentinels after the school’s long-awaited move finally happened over the summer. As if to celebrate, Spangdahlem also waved goodbye to its entire starting volleyball lineup, including 2016 Stars and Stripes girls volleyball Athlete of the Year Elise Rasmussen.

“It is a very young team and there will be growing pains,” Sentinels coach Eric Vining said.

Those schools have proved resilient in the past and could rebound quickly. But a pair of seasoned opponents are poised to supplant them atop Division III.