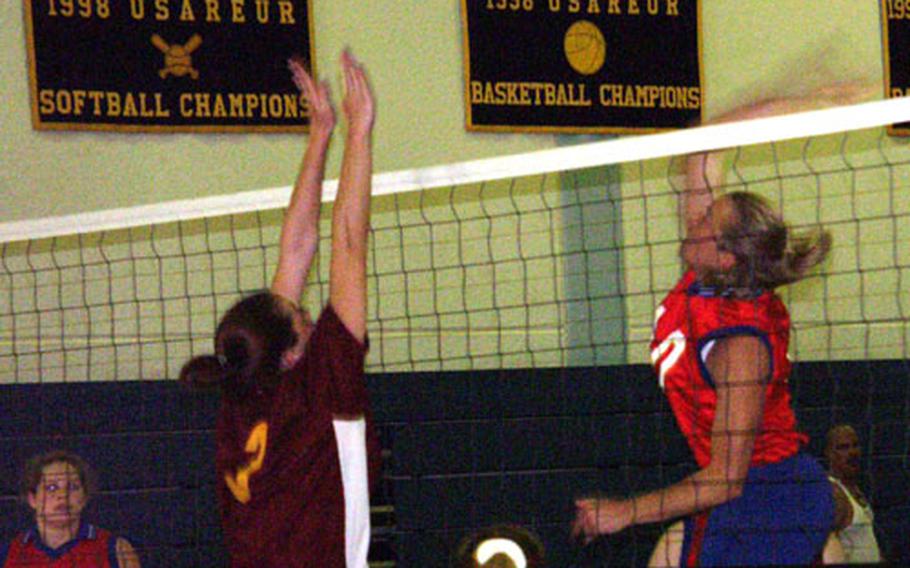 Bamberg&#39;s Debra McNamara generates some arm speed as she makes a kill over Vicenza&#39;s Candida Kilgore during Bamberg&#39;s 25-15, 25-17 pool-play victory Friday in the 2003 Army-Europe volleyball tournament at Patton Barracks in Heidelberg. The tournament continues through Sunday. (Rusty Bryan / S&S)

With one game left to play in pool play, Heidelberg assured itself of the top seed in the women&#8217;s draw thanks to a 25-15, 25-19 victory Friday over Bamberg.

Bamberg was playing its second match in succession Friday and third of the day when it ran into Heidelberg. Still, fatigue wasn&#8217;t a factor, according to Bamberg&#8217;s Erin McLaughlin.

Playing one match after another certainly paid dividends for the Stuttgart men, who claimed a forfeit victory over no-show Kitzingen on Thursday, and then defeated Graf-Vilseck 25-15, 25-15 and Vicenza 23-25, 25-17, 15-10.

Women&#8217;s play begins at 10 a.m. with a playoff for fourth place between Graf-Vilseck and Vicenza. The winner takes on Heidelberg at 1 p.m.