Defending champions will be tough to beat again 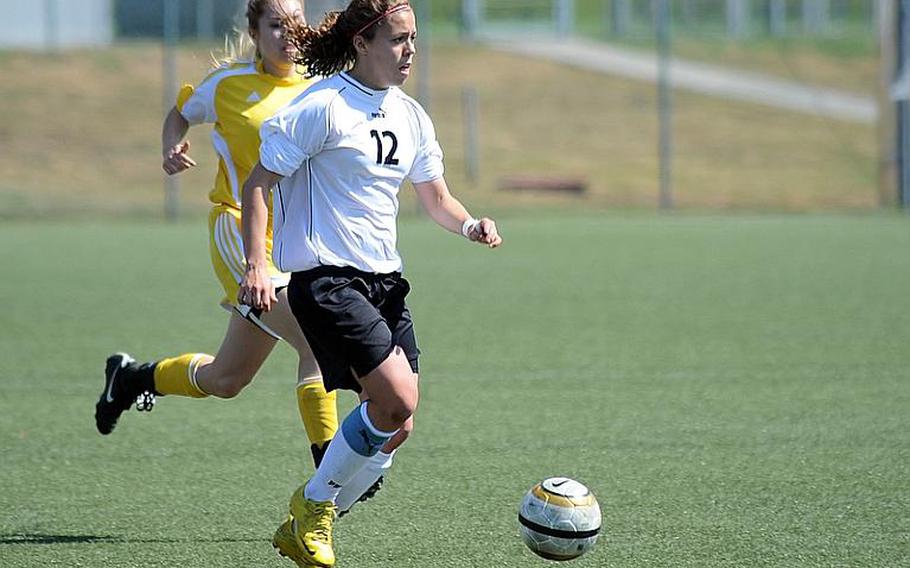 Buy Photo
Patch midfielder Emma Murray takes the ball up the field in a game at last year's European championships. Murray will be returning for the Lady Panthers, who will be looking to defend their Division I crown. (Michael Abrams/Stars and Stripes)

Buy Photo
Patch midfielder Emma Murray takes the ball up the field in a game at last year's European championships. Murray will be returning for the Lady Panthers, who will be looking to defend their Division I crown. (Michael Abrams/Stars and Stripes) Buy Photo
Ramstein's Josie Seebeck drives the ball up the field during last year's title game against Patch. She will be back this season to try to help her team unseat the Lady Pathers as Division I champions. (Michael Abrams/Stars and Stripes) 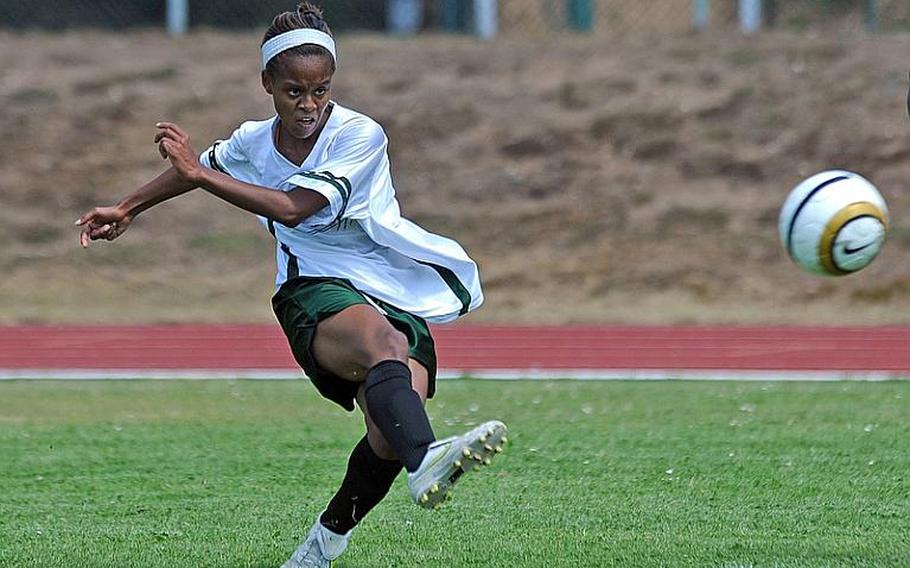 Buy Photo
Alexandra Mack of Naples gets off a shot in last season's Division II championship game against Vicenza. Mack will be back this season to help the Lady Wildcats defend their title. (Michael Abrams/Stars and Stripes) Buy Photo
Brussels' Alexandra McVicker, left, and Rota's Thais Gartland-Bonet collide in a hard-fought Division III girls soccer final last season,won by Rota 1-0. Both players will be returning for their teams as the DODDS-Europe soccer season gets under way this weekend. (Michael Abrams/Stars and Stripes)

Any team wishing to mount a challenge to the three defending European girls&rsquo; soccer champions would be well-advised to bring their A-games, beginning with Saturday&rsquo;s season-openers.

Challenging the Lady Panthers as usual are Ricardo Buitrago&rsquo;s Ramstein Lady Royals, led by NCAA Division I signee Josie Seebeck, the 2011 Stars and Stripes player of the year.

All Seebeck, who&rsquo;ll be taking her game to Central Michigan University after she graduates in June, did in 2011 was score 24 goals and hand out 16 assists. Ramstein scored 48 goals all season, so Seebeck had a hand in 83 per cent of them. She&rsquo;s joined by her classmate, All-European Mackenzie Crews, a stopper of the kind of athleticism and determination which has made her an All-European in three sports.

Joining the Patch-Ramstein mix this season is Heidelberg, which returns All-European midfielders Melissa Fry and Layna Lowe, who registered 10 goals and seven assists and nine goals and four assists, respectively, in 2011.

Like his counterparts in basketball, Heidelberg coach Jim McCauley also imported a huge talent from defunct Mannheim in senior Amber Veranen, a two-time All-Europe sweeper for the Lady Bison.

The other teams in D-I appear to be a step or two behind the Big 3 on the eve of the season.

Fans wanting an early look at how the favorites shake out should plan to be at Heidelberg&rsquo;s PHV athletic field Saturday. Patch, Ramstein, Heidelberg and Kaiserslautern will be on hand to test each other in a jamboree beginning at 9 a.m., according to McCauley.

AFNORTH coach Christopher Booth can call on scoring punch from senior Kaley Harless, who chalked up 18 goals and nine assists in 2011, and sophomore Erin Rivers, who accounted from eight goals and seven assists. Both made the All-Europe team.

Marymount International School of Rome expects to challenge behind All-European Caroline Wiley, and 2011 runner-up Vicenza can call on its All-Europe tandem of sophomore Alex Frank and senior Maya Swinehart.

Cautioned Booth, however, in an email: &ldquo;Division II is always a crap shoot. The championships always seem to spring some surprises &ndash; during the season we never compete against the Italian league schools, but, then again, they never compete against us. Though, with SHAPE being placed in Division II, the competition will really be wide open.&rdquo;

Division IIILike Patch, D-III champ Rota is chasing a three-peat. Unlike Patch, though, the Lady Admirals don&rsquo;t have any returning All-Europeans to lead them.

Just plenty of experienced talent, according to co-coach Clarice Brown.

&ldquo;Yesenia Solis, Tasha Eisenhower, Gabriela Rivera, Thais Gartland and Diana Santana,&rdquo; she identified them in an e-mail. &ldquo;I call them the &lsquo;Five Babies.&rsquo; They came on board when they were 9th graders and now are seniors.&rdquo;

Play begins Saturday at eight venues scattered across Europe, working toward the concurrently played D-I, II and III events at Ramstein May 21-24.