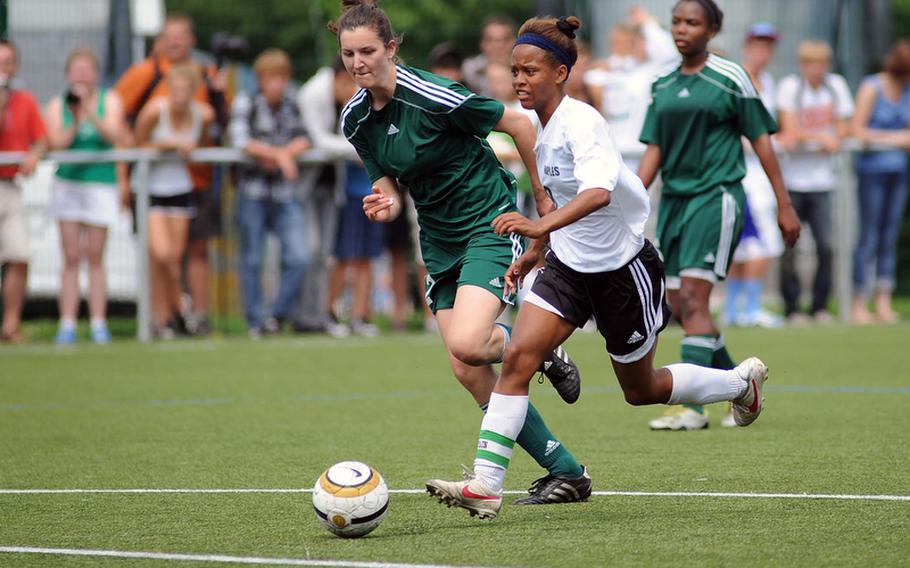 Alexandra Mack of Naples gets past SHAPE's Teresa Muldoon on her way to scoring a goal in the Wildcats' 6-1 win over SHAPE in a semifinal at the DODDS-Europe soccer championships. Naples advanced to Thursday's final against AFNORTH. (Michael Abrams/Stars and Stripes)

Alexandra Mack of Naples gets past SHAPE's Teresa Muldoon on her way to scoring a goal in the Wildcats' 6-1 win over SHAPE in a semifinal at the DODDS-Europe soccer championships. Naples advanced to Thursday's final against AFNORTH. (Michael Abrams/Stars and Stripes) 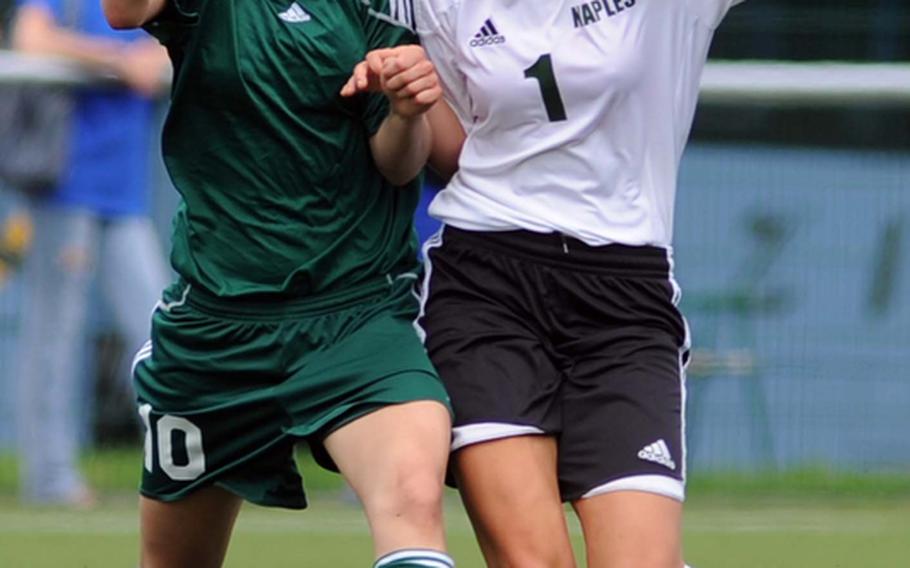 SHAPE's Karoline Soerensen, left, and Katie Waller of Naples battle for the ball in a Division II semifinal at the DODDS-Europe soccer championships. Naples won 6-1 to advace to Thursday's final against AFNORTH. (Michael Abrams/Stars and Stripes) 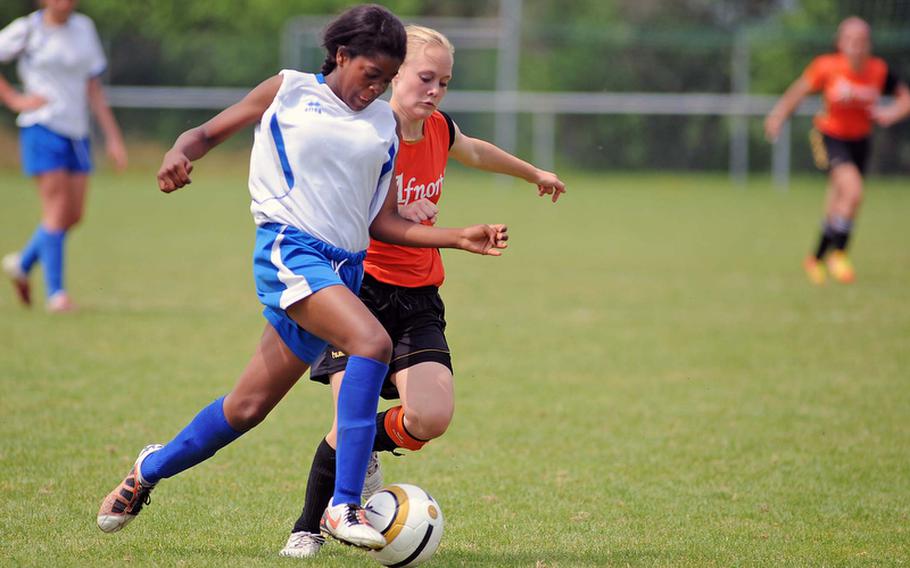 Marymount's Lori Nsimasi, left, and AFNORTH's Mackenzie Lynch battle for the ball in a Division II semifinal at the DODDS-Europe soccer championships. AFNORTH won the match 3-0. (Michael Abrams/Stars and Stripes) 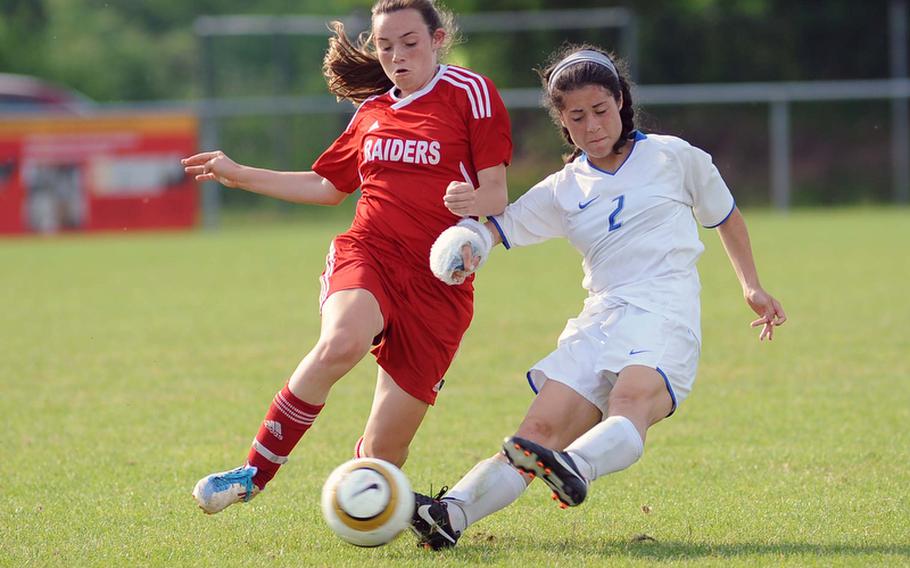 Kaiserslautern's Arianna Osmar blocks a pass by Ramstein's Josie Seebeck in a Division I semifinal at the DODDS-Europe soccer championships. Ramstein won 4-1 to advance to the finals against Patch. (Michael Abrams/Stars and Stripes) 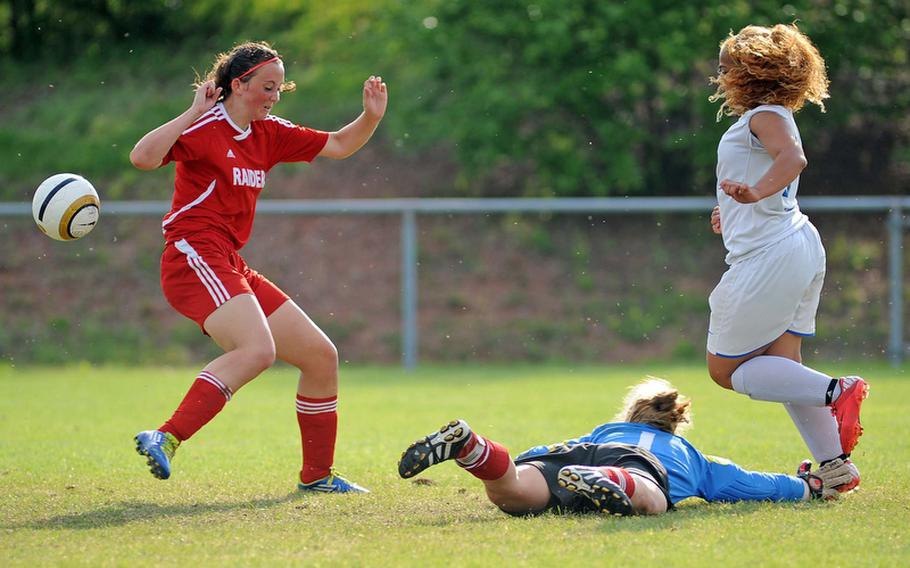 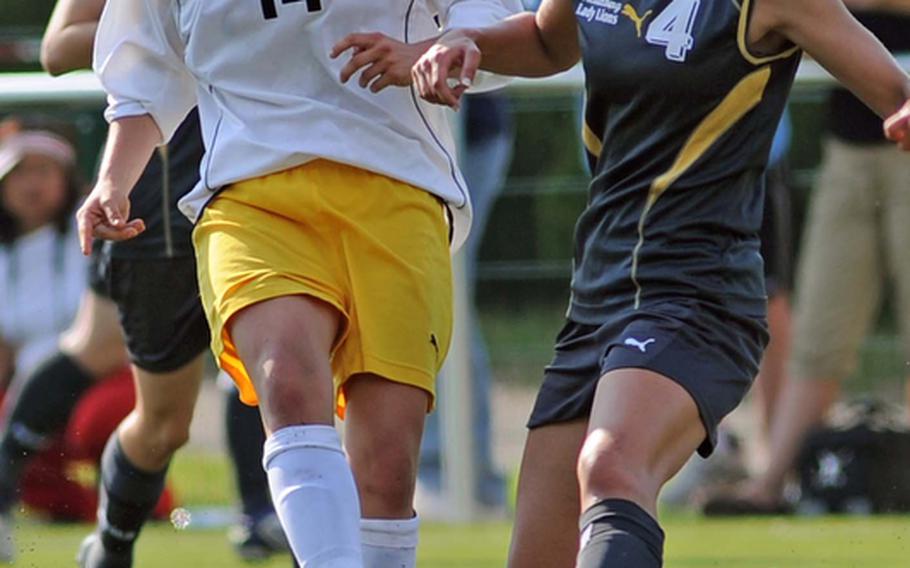 Patch's Brittany Nixon sends the ball upfield against Heidelberg's Anna Miller in a Division I semifinal at the DODDS-Europe soccer championships. Patch won 5-3 to advance to the finals against Ramstein. (Michael Abrams/Stars and Stripes) 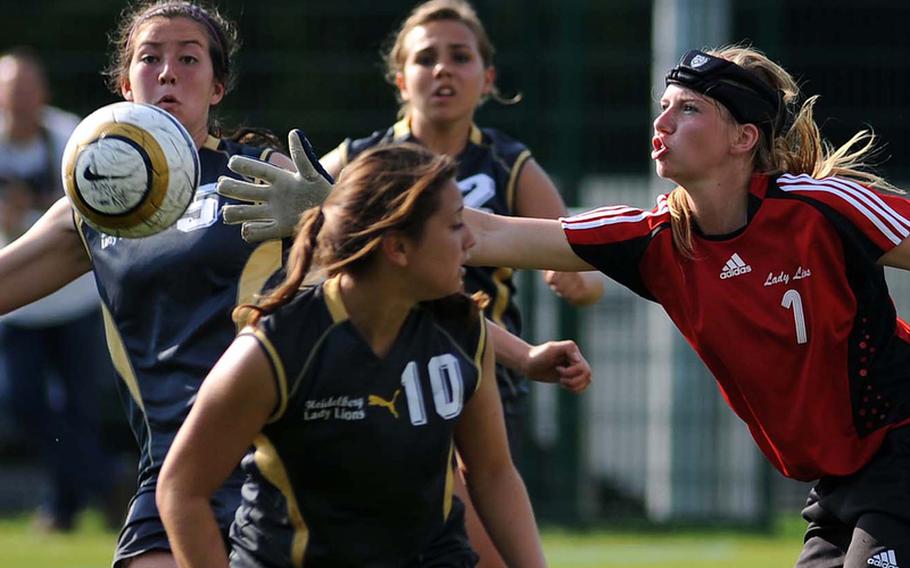 Heidelberg keeper Christina Muehlbauer clears the ball in front of a pride of fellow Lions, but her efforts were not enough as her team fell to the Patch Panthers 5-3 in a Division I semifinal at the DODDS-Europe soccer championships. Heidelberg will play Kaiserslautern for third place Saturday, while Patch will square off with Ramstein. (Michael Abrams/Stars and Stripes)

REICHENBACH-STEEGEN, Germany &mdash; All three defending girls champions will get a chance to win those crowns again Thursday, when the Divisions I, II and III girls title games are scheduled to be played at Ramstein high school.

Two-time defending girls&rsquo; champ Naples spotted SHAPE an early goal in their semifinal, then roared back with six unanswered goals.

&ldquo;I&rsquo;m so proud of our team,&rdquo; said Mack, who got the Wildcats even at 1-1 on a penalty kick, then put her team in front just two minutes later on a quicksilver drive into and through the SHAPE box. &ldquo;We stepped it up and really worked together.&rdquo;

She repeated the feat in the second period to make it 3-1, and then turned over the scoring to Waller and Ortwein.

SHAPE led early, 1-0 on a goal by Liz Burden, but had a tough time cracking the Naples defense thereafter.

The Wildcats are scheduled to face AFNORTH in Thursday&rsquo;s 1 p.m. title game. AFNORTH blanked Marymount International School of Rome 3-0 in the other D-II semifinal behind two goals from Erin Rivers, one by All-European Kaley Harless and some impenetrable goaltending by Jasmine Doll.

Patch&rsquo;s two-time D-I girls find themselves in their usual last-day position in these tournaments, occupying one of the two benches at the title game. It&rsquo;s to kick off at 4:45 p.m. against Ramstein, which topped Kaiserslautern 4-1. It&rsquo;ll be a rematch of last year&rsquo;s championship game.

But the way the Panthers made their way to this finale was a bit out of the ordinary.

Patch, which surrendered just one goal all season and none in its three pool-play games here, gave up two in the first half in its 5-3 semifinal victory over Heidelberg.

&ldquo;We knew they were going to come out with their usual Heidelberg intensity,&rdquo; said Patch All-European Emma Murray, who scored twice.

Murray&rsquo;s first strike, which came off a rocket she launched while cutting across the top of the box, put Patch up 1-0 in the 13th minute, but Heidelberg became the first team to lead Patch this season when Melissa Fry converted a penalty kick awarded for a hand ball in the box, and All-European Layne Lowe hammered a shot just under the crossbar as she made a Murray-like move across the box 21 minutes into the game.

Kaileen Pritchard made a strong run down the right side just two minutes later and converted a pass from Samantha Barglof to make it 2-2 at halftime, and Patch went up 3-2 just 10 minutes into the second half when speedy Lauren Rittenhouse beat the Lions&rsquo; defense to a long ball off the foot of Whitney Mannier.

Heidelberg, however, equalized again when Fry got her head on a rebound and rammed it past Patch keeper Ellie Welton, before Murray and Brittany Nixon put the game away with stellar individual goals from just outside the box.

Rota&rsquo;s girls completed a 5-0 run through the round robin with their blanking of Ankara on Wednesday. The Admirals are to take on Brussels, a 2-0 victor over Menwith Hill on Wednesday, in the D-III title game at 10 a.m. Rota beat Brussels 2-1 on Wednesday and 1-0 at Alconbury during the season.

CorrectionPatch's Brittany Nixon was misidentified in an picture caption in an earlier version of this article.