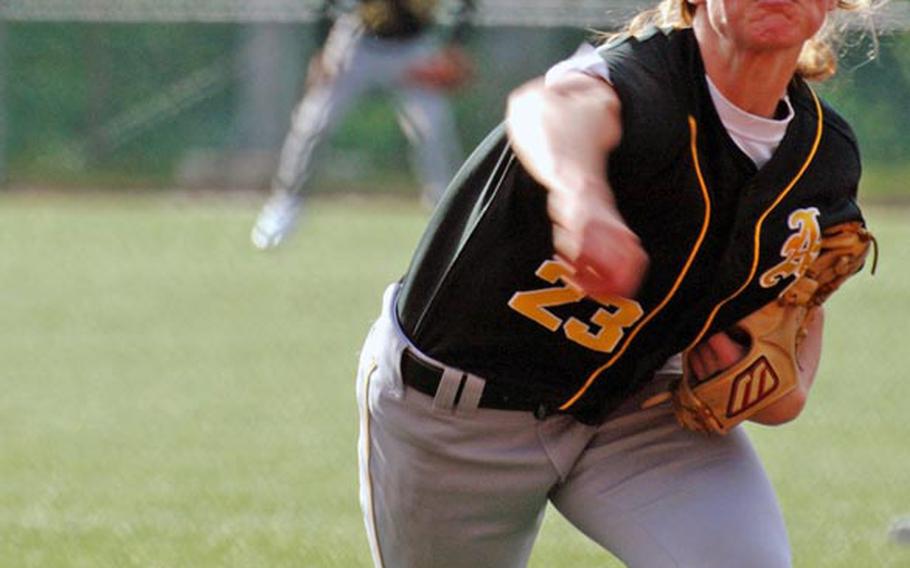 Buy Photo
Bessie Noll of American School In Japan, the first girl to record a pitching win in Far East Baseball Tournament history, is one of eight players back from a Mustangs squad that won the Far East title in its first entry in the three-year-old tournament. (Erika Brun/Special to Stars and Stripes)

&ldquo;There are a lot of teams out there that will be tough to beat,&rdquo; said coach John Seevers of a Mustangs team that outlasted Kadena 11-9 in the rainy Far East final last May 26 in South Korea.

They won the title in their first time at Far East despite only a 10-game regular-season caused by the March 11 earthquake and tsunami that truncated the Kanto Plain and DODDS Japan seasons.

Kadena, which has two Far East runner-up finishes to its credit, and Kubasaki, which won the inaugural Far East title in 2010, &ldquo;have always been outstanding; I have a lot of respect for them,&rdquo; Seevers said.

He and his charges say they&rsquo;re cautiously optimistic regarding the 2012 season. &ldquo;We just hope to be competitive, and we&rsquo;re very much looking forward to being a part of Far East,&rdquo; Seevers said.

&ldquo;They&rsquo;re going to be the top team,&rdquo; Kubasaki coach Randy Toor said. &ldquo;You have to play a really good game, play good defense (to beat them). If it comes down to a slugfest, they&rsquo;ll take it no matter what.&rdquo;

And the Panthers feel it may be their time to take the final step, after losing to ASIJ and Kubasaki in back-to-back Far East finals. &ldquo;Not one player has any doubt that we can do this,&rdquo; junior Jared Paul said.

Far East returns to Camp Walker&rsquo;s Kelly Field, Victory Field at Camp Henry and Carroll Field at Camp Carroll and is scheduled for May 21-24.

Regular-season play begins this weekend at E.J. King in Japan and at Kadena on Okinawa. DODDS Korea teams generally wait until the weather warms, and aren&rsquo;t scheduled to begin play until March 30-31.

The DODDS Japan season features two teams that have played their seasons in the fall against Western Japan Athletic Association teams since 2005.

E.J. King of Sasebo Naval Base and Matthew C. Perry of Marine Corps Air Station Iwakuni couldn&rsquo;t otherwise play in the Far East tournament because it would have been out of season for them.

&ldquo;I have 17 young men (who) are excited about the opportunity to play baseball in the spring,&rdquo; new Perry coach Frank Macias said.