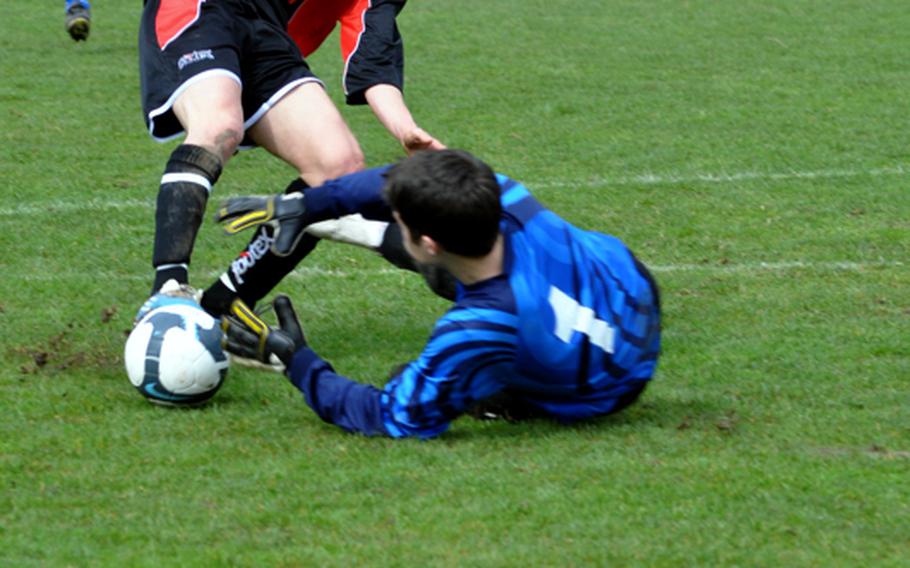 Buy Photo
Aviano goalkeeper Corey Webb makes a diving stop to thwart an attempt to score by Pietro Dinmore of American Overseas School of Rome during the opening weekend of spring sports for DODDS-Europe. Webb had a busy day, making 18 saves, as AOSR won, 4-0. (Kent Harris/Stars and Stripes)

Buy Photo
Aviano goalkeeper Corey Webb makes a diving stop to thwart an attempt to score by Pietro Dinmore of American Overseas School of Rome during the opening weekend of spring sports for DODDS-Europe. Webb had a busy day, making 18 saves, as AOSR won, 4-0. (Kent Harris/Stars and Stripes) Sieben&rsquo;s opposite number, on the other hand, Aviano keeper Corey Webb, turned aside 18 AOSR shots.

Next up for AOSR is what figures to be its most important test of the regular season. It hosts Marymount, the team that defeated it 3-2 last spring for the Region IV title, on Saturday.

&ldquo;It&rsquo;s been five years since AOSR has won the Italian championship,&rdquo; Falcons coach Anthony DeNicola wrote in a preseason email, &ldquo;so that is one of our goals this year.&rdquo;

Aviano is next scheduled to play the American School of Milan on Saturday.

In other boys games on opening day:

According to Sigonella coach Philip Andre, the weather had Jacks, who scored two of his three goals prior to intermission, playing defense after the break.

With the score tied 3-3, &ldquo;An approaching storm gave Naples a hefty wind, and most of the second half was played in Sigonella&rsquo;s defense,&rdquo; Andre wrote Saturday in an email. &ldquo;Sigonella had to change formation by putting &hellip; Jacks into a defense position and putting fellow striker Jack Wegman man-to-man on Naples&rsquo;s extremely dangerous Nigel Alexander.

&ldquo;Peter Swisshelm did an excellent job keeping Sigonella&rsquo;s defense consistent, even though most of them have never played soccer before. Once the weather cleared &hellip; Jacks was able to make a run out of the defense to catch Naples off guard and score his third and game-winning goal.&rdquo;

Alexander opened the scoring for Naples, then assisted on his team&rsquo;s other two goals, both by sophomore Troy Reeves.

Thomas and Jeofrey Lucero posted assists from Sigonella, which is home against Vicenza on Saturday. Naples is to host International School of Florence on Friday.

David Lynch, off a feed from John Camuseo, scored for Vicenza, which was outshot 22-7 Saturday.

Next for Vicenza is a trip to Sigonella for a Saturday game; Milan is to host Aviano on Saturday.