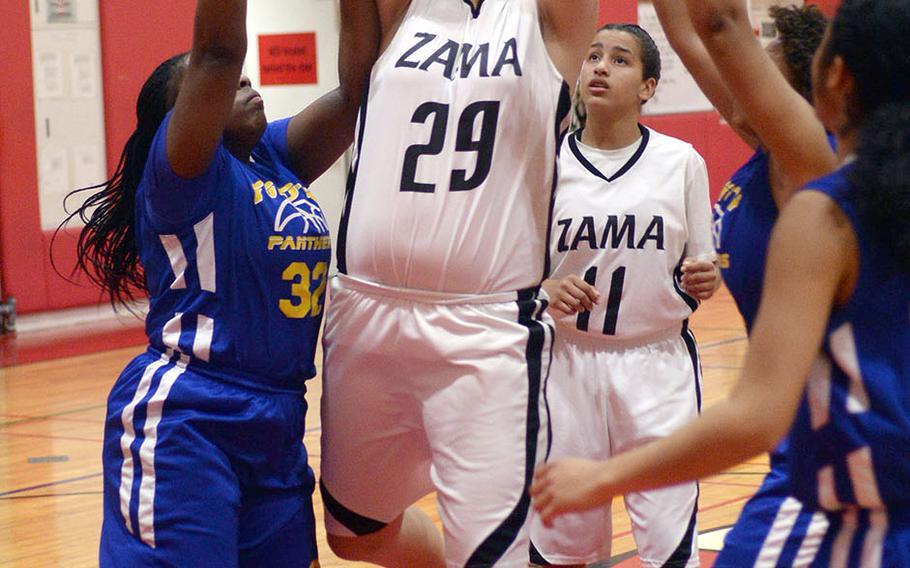 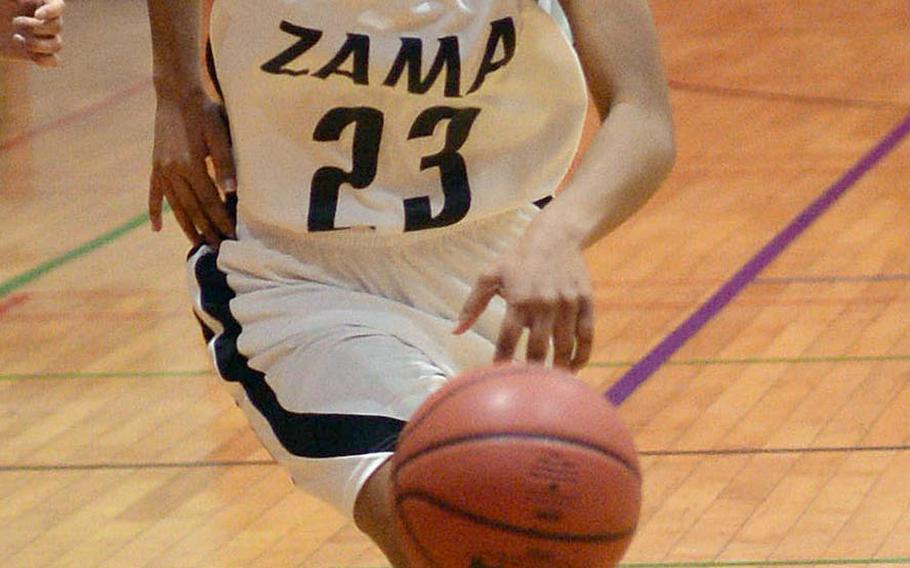 Chloe Sterling is Zama's main backcourt option, averaging better than 20 points per game -- and she's only a freshman. (Dave Ornauer/Stars and Stripes) 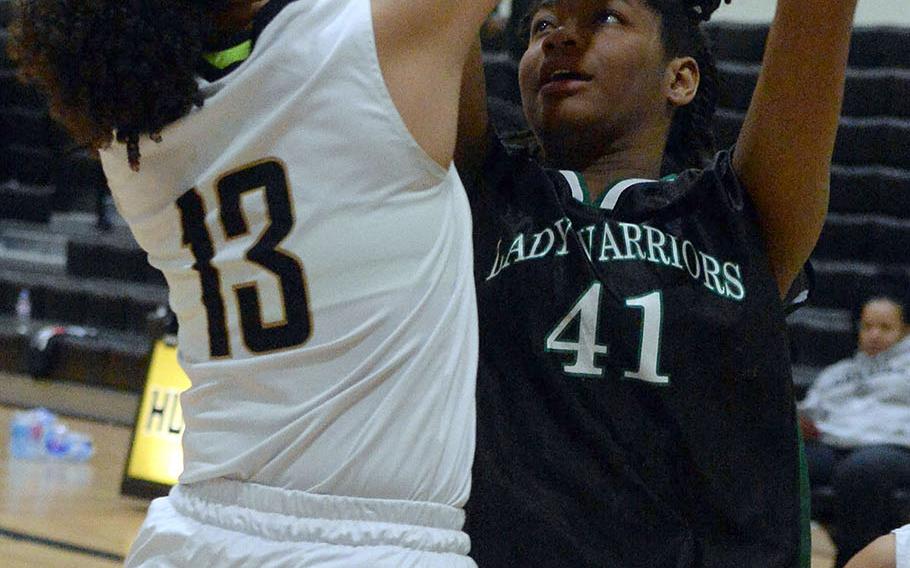 Ebony Dykes of Humphreys and Dai'Ja Turner of Daegu are two of the bigger inside options for both teams entering this week's Far East girls basketball tournaments. (Dave Ornauer/Stars and Stripes) Kadena's Lydia Rice and Kubasaki's Megan Charnowski give Okinawa some inside presence during the Far East Division I girls tournament. (Mary Obsuna/Special to Stripes) 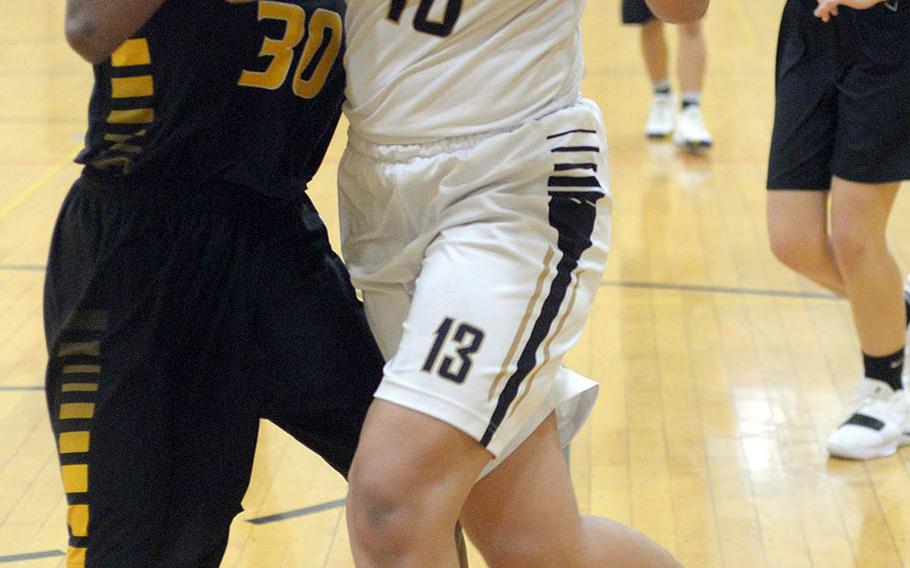 Senior Ebony Dykes of Humphreys and junior Atiria Simms of Kadena could have plenty to say about who wins the Far East girls Division I title. (Dave Ornauer/Stars and Stripes) 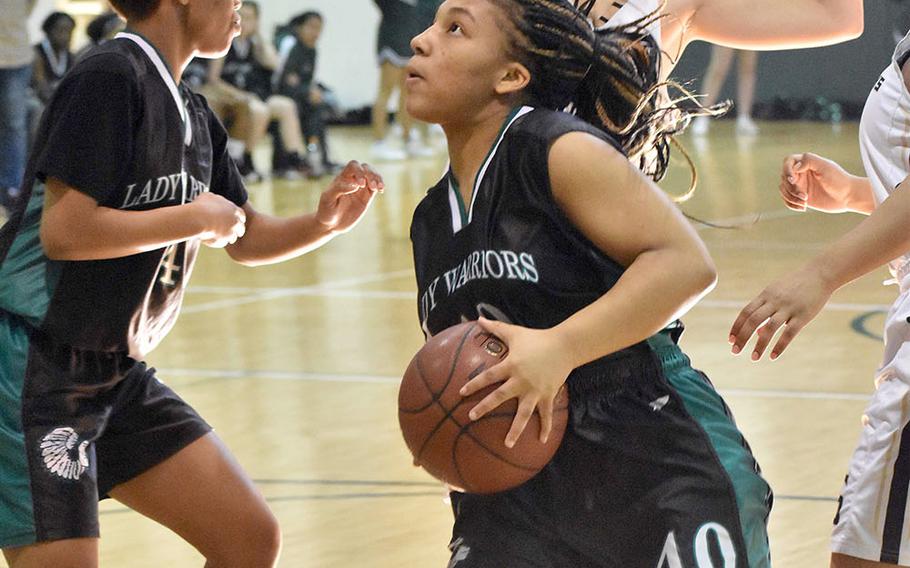 Bethani Newbold is one of two super sophomores helming Daegu's attack; Maria Bruch, rear, is one of four players who transferred from Seoul American to Humphreys and could have an impact in the Division I girls Far East. (Mary Sarantakes/Special to Stripes) Ariel Harvey and Daegu are a solid favorite in Far East girls Division II; Kylie Hart and Seoul American could be a sleeper. (Mary Sarantakes/Special to Stripes) After suffering a 30-game losing skid in the 2015-16 and 2016-17 seasons, super sophomores Bethani Newbold and Dai’Ja Turner and the Warriors put that in the rear-view mirror and went 12-0 in the regular season ending last month.

They won the Korean-American Interscholastic Activities Conference Blue Division regular-season title, before going on to finish second in the KAIAC Cup Tournament to host Humphreys.

The Warriors now have their sights set on the Far East Division II Tournament title.

Much of what came before this season was something the Warriors, comprised mostly of freshman and sophomores, heard about from older classmates and teachers, first-year Daegu coach Jonathan Van said.

“We came into this season with a freshman mindset, a new perspective,” said Van, whose Warriors are 18-2 overall. “It’s easy to get past that school history, easy to shrug it off and move ahead when you only heard about it and didn’t experience it.”

What’s made them so successful on the court, Van said, is finishing strongly. “Defense and second-half intensity, all season long has worked for us,” he said. “In the second half, we would wake up and play our best basketball, when it was all on the line.”

Even the Warriors’ defeats gave them some takeaways to help them prepare for Far East, scheduled to start Thursday at Kadena.

“They came at the right time and we got a chance to get better as a result,” Van said of the Warriors’ 64-48 and 62-53 defeats against Humphreys in the double-elimination KAIAC Cup Tournament on Feb. 3.

“We have a chance to get it right,” Van said. “It gave us some talking and teaching points.”

Division I features a full round-robin with all seven teams. The top four qualify for the title with a single-elimination playoff and a consolation bracket for the bottom three teams.

Division II features pool play with the 10 teams divided into two pools, followed by a single-elimination with consolation playoff.

On paper, it looks like Division II should be a chase for the title between Daegu and DODEA-Japan regular-season and tournament champion Zama (20-5, 10-0, with its guard tandem of Chloe Sterling and Kirari Smith and center Jessica Atkinson.

Four-time defending champion Yokota must navigate this tournament with a handful of players back from a team that no longer has Britney and Jamia Bailey commanding things on the court.

A sleeper pick might be Seoul American (8-7, 5-7), which won seven of its last eight games and the KAIAC Plate Tournament title.

Humphreys is at the Division I level for the first time in the school’s six-year history, with former Falcons Ebony Dykes and Alex Easterling in the middle and Maria Bruch and Chakhira Goodwater in the backcourt.

But they might have their hands full with host Kadena (12-5), which remains strong with junior Atiria Simms in charge in the backcourt and junior Lydia Rice among the options in the paint.

And all the Division I teams would appear to be chasing two-time defending champion American School Bangkok with its sister tandem of Keisharna and Shanique Lucas, the latter the two-time reigning Most Valuable Player.

“They’re excellent closers. They don’t get rattled,” said Johnny Cooper, whose Panthers led the Eagles by five points with two minutes left in the final last January. “The game was in our hands. We made too many mistakes and those two girls made (us) pay for it.”

For his part, the Lucas’ sisters’ father, Eagles coach David Lucas, says he’s not taking anything for granted even though he returns the six core players of his team from last year. ASB won three inter-area tournaments this season, but they’ve not played in a month.

And the Eagles face host Kadena in the very first game Thursday. “That will definitely give me an idea of how our longer-than-planned layoff has impacted the team,” the elder Lucas said. “I imagine the target on our backs will be large. I’m expecting a packed gym.”