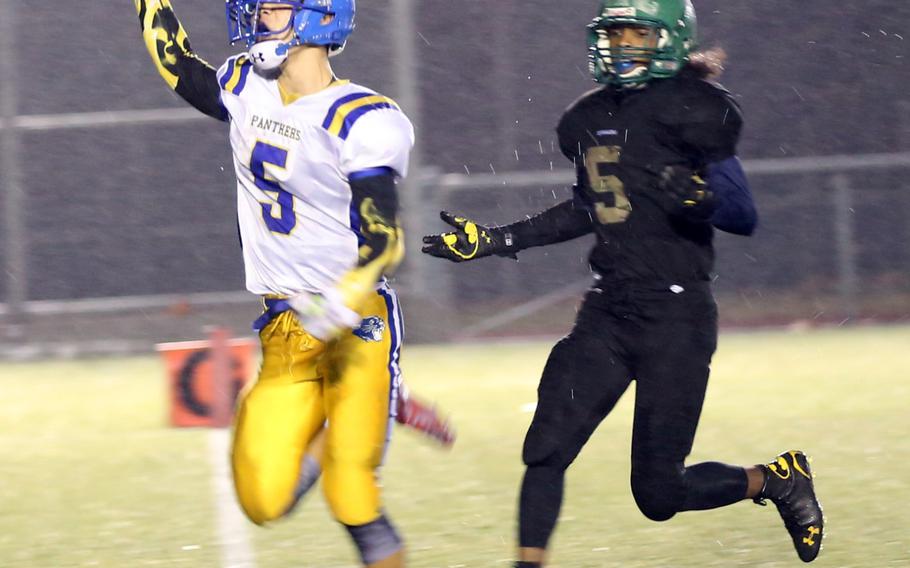 Yokota RB Shota Sprunger crosses the goal line for a touchdown ahead of Daegu's Jarvis Stokes. (Victoria Boyce/Special to Stars and Stripes)

Yokota RB Shota Sprunger crosses the goal line for a touchdown ahead of Daegu's Jarvis Stokes. (Victoria Boyce/Special to Stars and Stripes) 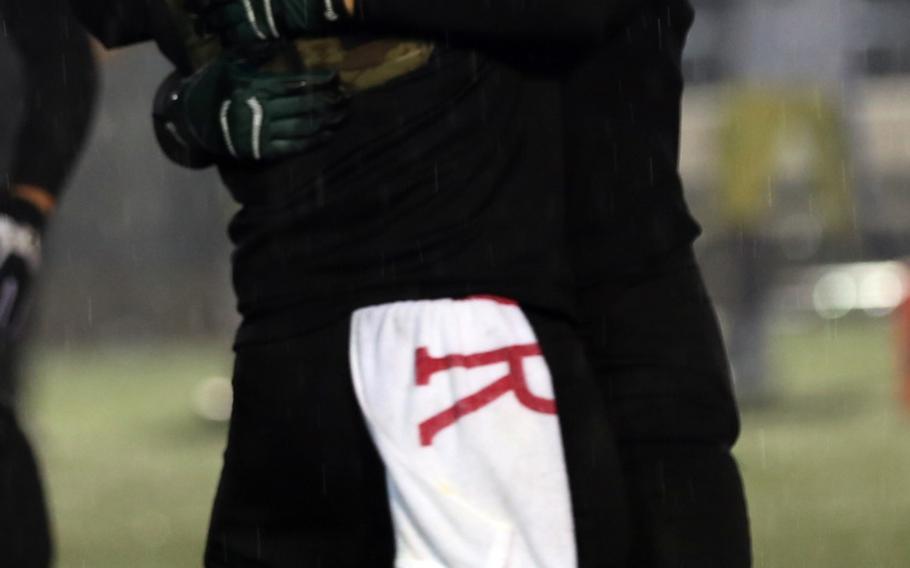 Daegu teammates Kenneth Musselwhite and Tyler Pak share a hug as the clock winds down and they realize they're closing in on a third straight Far East Division II championship. (Victoria Boyce/Special to Stars and Stripes) 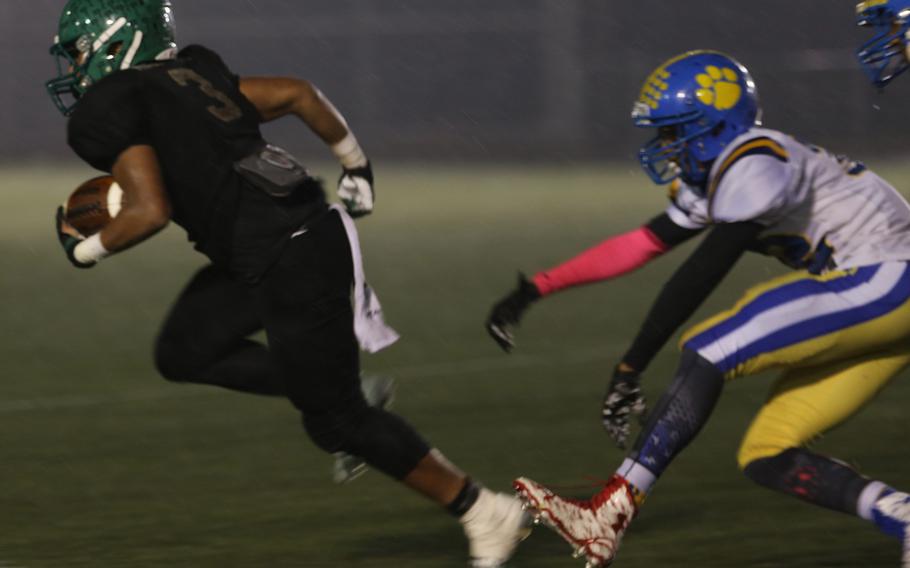 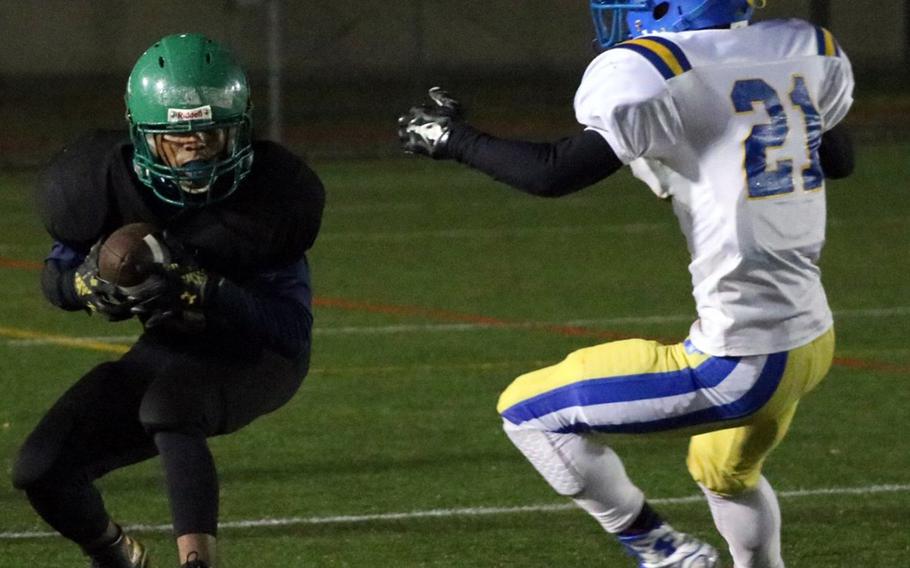 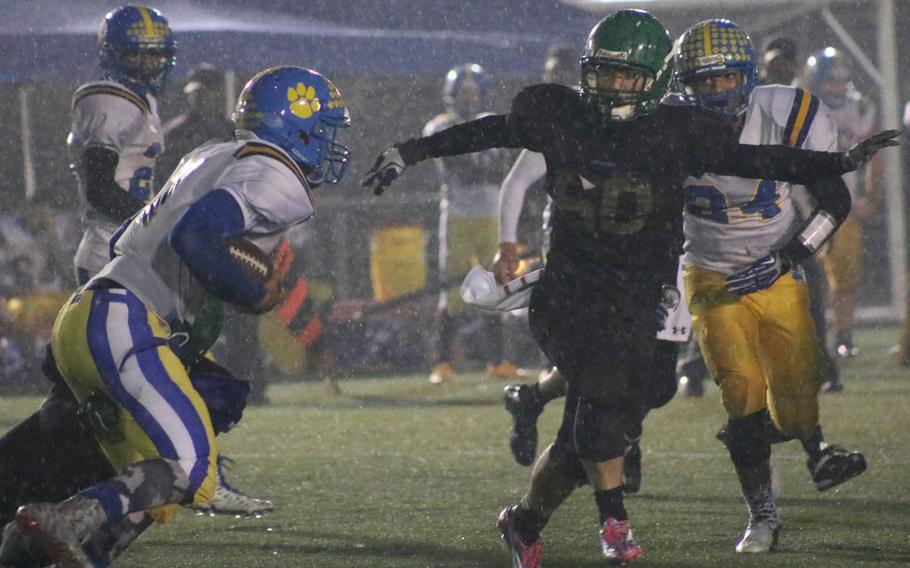 Yokota QB Marcus Henagan slithers out of the tackle of Daegu's Tyler Pak and looks to run past Daegu defender Kenneth Musselwhite as teammate Jamarvin Harvey looks to help. (Jinna Yu/Special to Stars and Stripes) 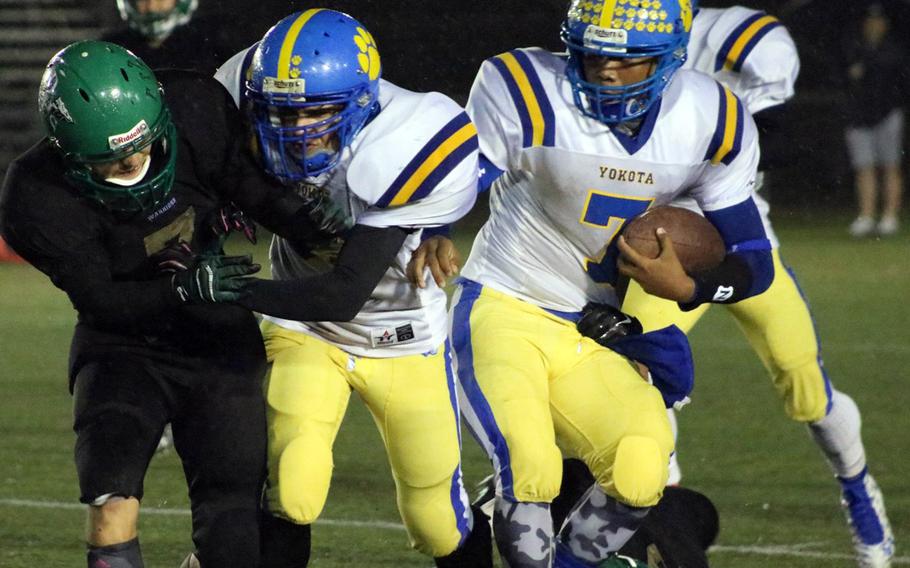 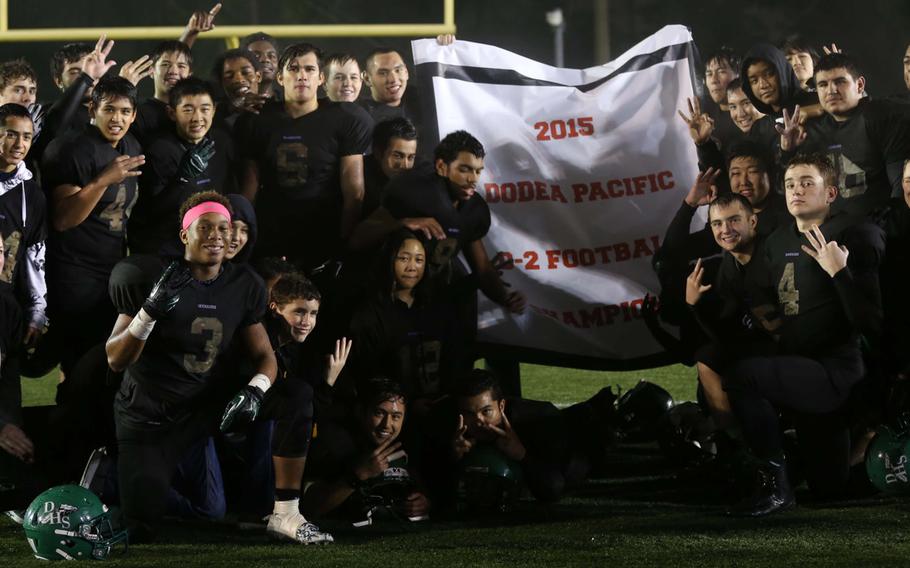 Daegu players and coaches gather round the victory banner. (Victoria Boyce/Special to Stars and Stripes) 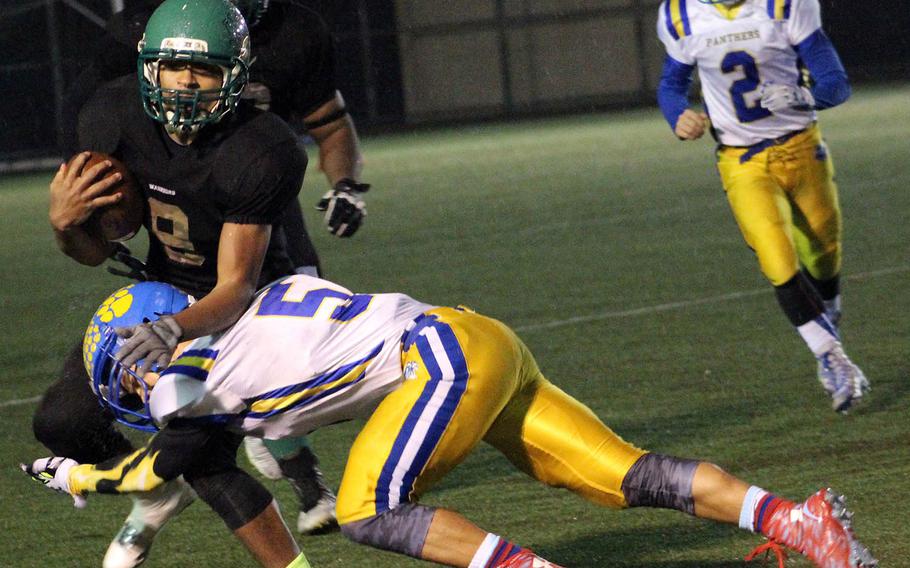 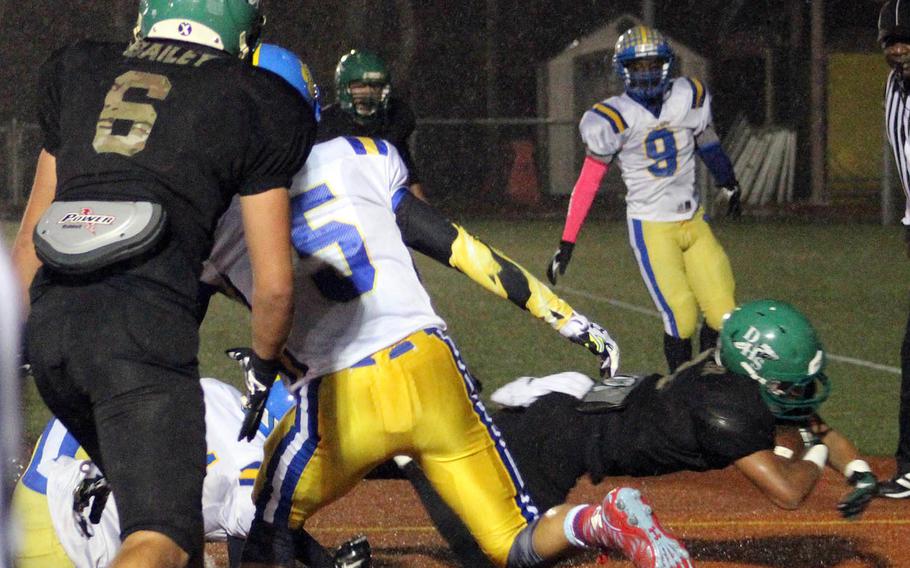 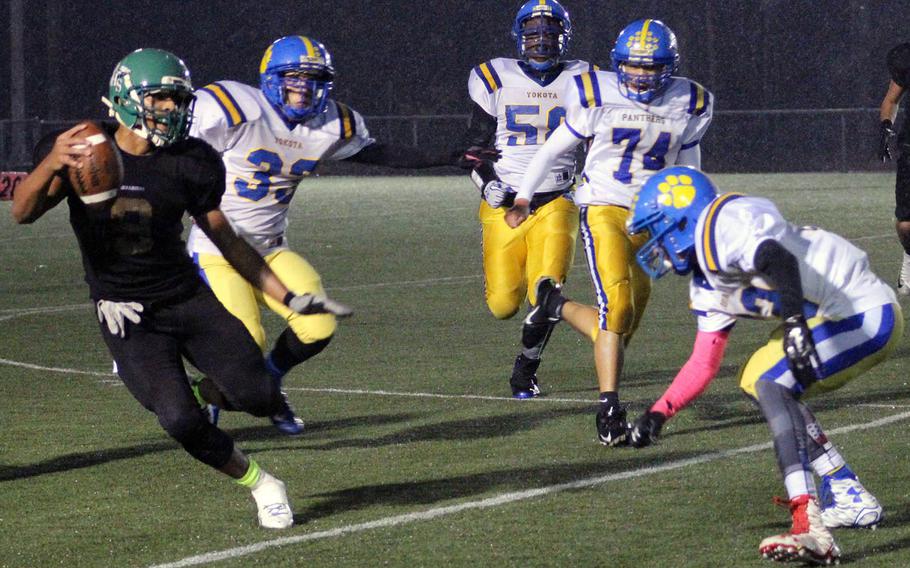 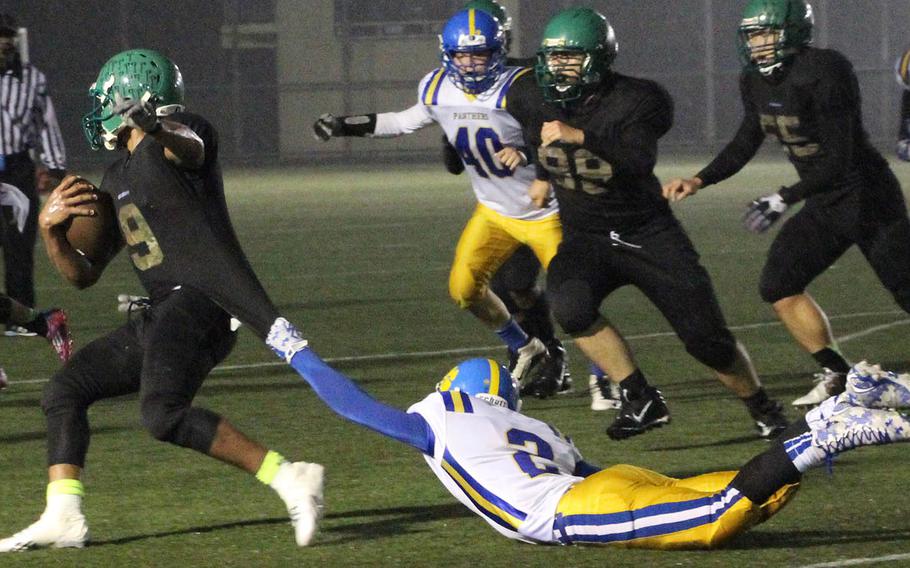 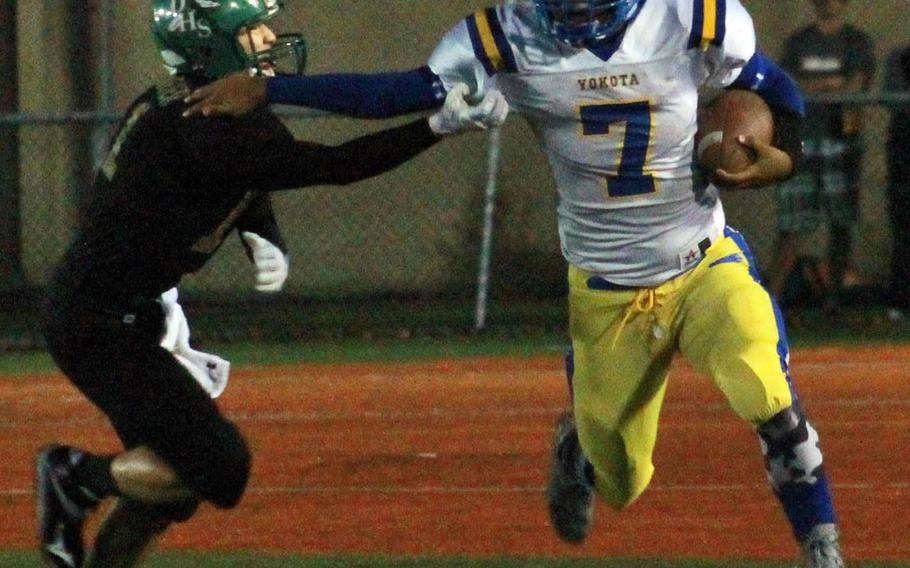 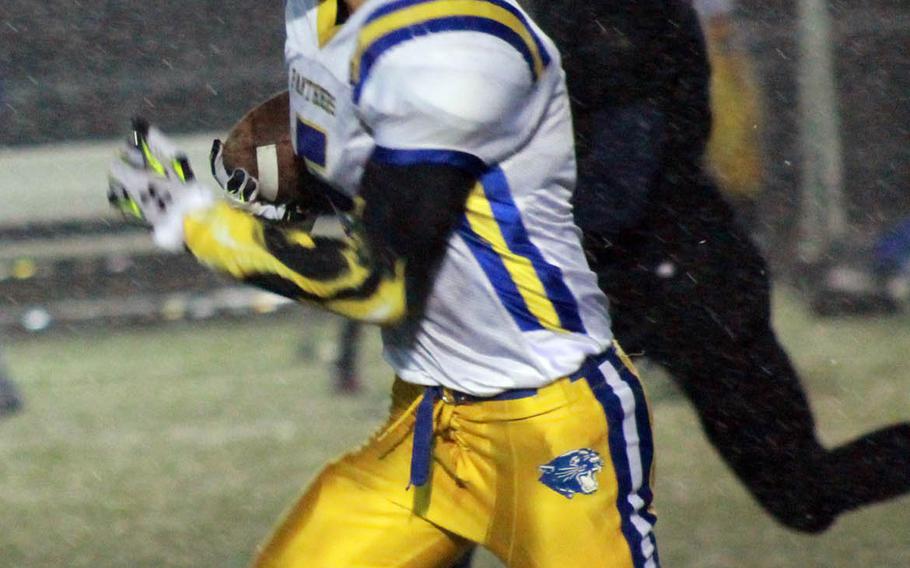 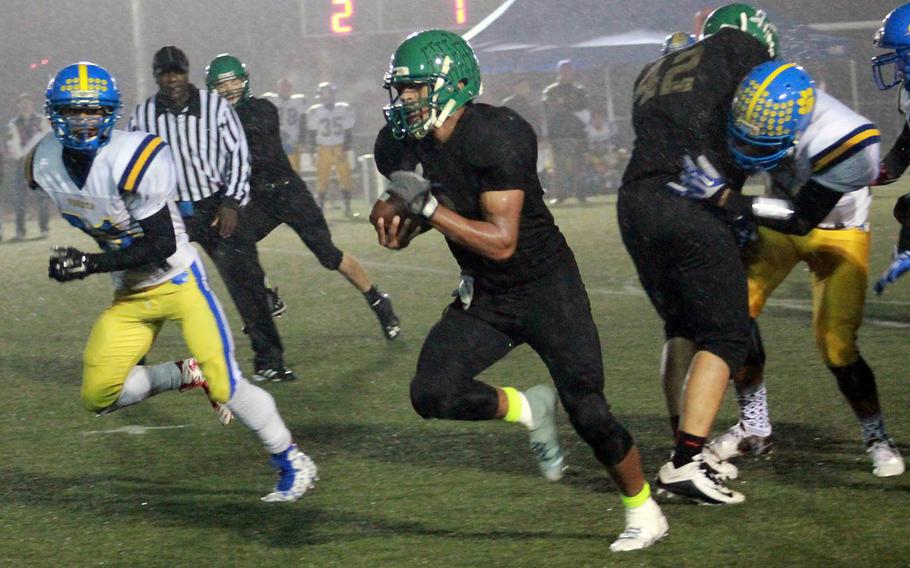 CAMP WALKER, South Korea – Put Daegu’s football team in a first-half hole and you have the Warriors right where they want you.

That’s been the narrative for Daegu the last two weeks, including Saturday’s Far East Division II title game. Josh McCaw rushed for five touchdowns and 188 yards on 31 attempts in the rain as the Warriors rallied from a 28-6 deficit for a 51-36 win over Yokota.

That gave Daegu its third straight D-II championship and Pacific-record fifth overall. And it was the second straight week the Warriors came from behind against a Japan D-II team; they scored 40 unanswered points to down Matthew C. Perry 52-20 on Oct. 31.

“They came at us physical and fast and we had to adjust to it,” first-year Warriors coach Phillip Loyd said. “We made some stops on defense and our offense got rolling and that got us going.”

For awhile, it seemed as if the Panthers (7-2) were the ones who’d get on a roll and not stop.

Marcus Henagan hooked up with Shota Sprunger for touchdown passes of 23 and 40 yards, while Jamarvin Harvey and Shomari Tindal each ran for scores, putting Yokota up 28-6 with 5:50 left in the first half. Daegu only managed a McCaw 5-yard run to cut it to 7-6 early.

“That lit a fire under us,” Loyd said, crediting a bevy of assistant coaches who came out of the community to help out at season’s beginning. “They fit the kids really well. We knew if we could adjust to their (Yokota’s) speed and match them, we’d be OK.”

And from there, the Warriors could not be caught.

McCaw tied it 36-36 with a 4-yard touchdown run and quarterback DeAndre Rosalie tacked on a two-point conversion and the Warriors led for good 38-36 early in the third quarter. Anthony Calhoun and McCaw each added short TD bursts late in the fourth quarter to cap the scoring.

Calhoun added a pair of late fumble recoveries – which also mirrored his performance in the second half against Perry. And the Warriors shut out both their last two opponents by a combined 61-0 in the second half.

It was the capper to a season in which the Warriors (6-2) entered the last two weeks of the regular season not knowing who they’d be playing.

After Osan forfeited its two games with Daegu. Perry and a Korean team, Songdo of Inchon, filled in.

The loss made things doubly miserable for Yokota coach Tim Pujol, who traveled to Daegu to scout the Perry game only to come down with the flu. He served as the tournament director for the Far East D-II volleyball tournament at Yokota last week and missed most of Tuesday’s and Thursday’s action. And Saturday’s game was played in day-long rain.

“We came up a little short,” Pujol said. “Daegu’s a great team; they block and tackle well. We congratulate them on a great win.”

Untimely turnovers and an inability to stop the Warriors on third down proved to be the Panthers’ undoing, Pujol said.

“Our boys gave it everything they had,” Pujol said. “They (Warriors) jumped up and got some sustained drives going and scored. We could not consistently get the defense off the field.”