D-I soccer teams square off against each other 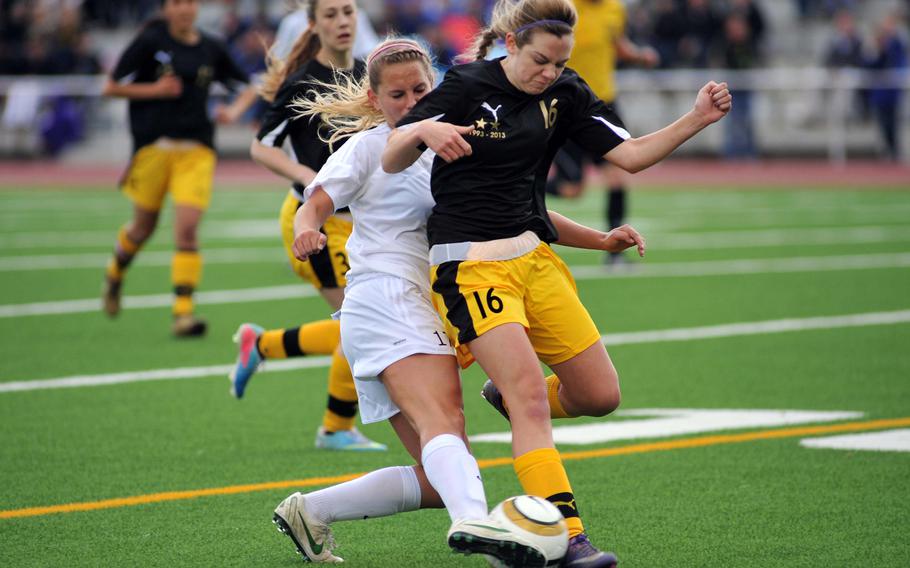 Patch's Mallory Flynn, right, stops Ramstein's Shannon Guffey from centering the ball in last season's Division I final at the DODDS-Europe soccer championships in Kaiserslautern, Germany, won by Patch1-0. Flynn has graduated, but Guffey is back for the Royals as she and her teammates will try to turn the tables on the Panthers. The Royals will get their first chance Friday afternoon when they take on the Panthers at home. (Michael Abrams/Stars and Stripes)

With its teams playing scattershot schedules against mostly non-divisional opponents, it’s been difficult to get a handle on DODDS-Europe Division I soccer this spring. That begins to change this weekend.

Five of the division’s six schools will be in action against each other Friday and Saturday, playing a set of eight combined boys and girls games that should amount to a revealing preview of next month’s Division I tournament. Patch visits Ramstein and Vilseck visits Wiesbaden on Friday; Wiesbaden heads to Patch and Kaiserslautern hosts Vilseck on Saturday.

The main event of the weekend’s impressive slate takes place Friday at Ramstein: a rematch between the defending European girls champion Patch Panthers, and the team they beat for that title, the homestanding Royals.

The two programs have played tug-of-war with the European crown for a half-decade now. Patch yanked it back last year with a 1-0 title-game triumph, avenging the 1-0 Ramstein win that gave the Royals the 2012 championship. Ramstein’s 2012 win broke a two-year streak of Patch titles, the latter of which came at the Royals’ expense. Including Ramstein’s 2009 win over Patch, the Panthers and Royals have played each other in four of the last five European championship games, with each team winning two of those games.

Regardless of what happens Friday, the teams are good bets to renew that rivalry in this year’s tournament finale. Both teams bring 2-0 records into the game, and neither has allowed a single goal.

Wiesbaden might have something to say about that, however. The Warriors have been equally impressive in building their own early 2-0 record.

The boys side of the schedule holds no such established power structure. With defending champion International School of Brussels rebuilding and 2013 runner-up Heidelberg shut down, the path is clear for a new champion. And there is no shortage of applicants.

Ramstein made a major statement April 3 against Kaiserslautern in the season’s first matchup between two Division I teams. The Royals scored in the opening seconds, added points just before and just after halftime and tacked on an insurance goal late in a wire-to-wire 4-0 drubbing.

Patch has only had one varsity game so far, but piled up several games’ worth of offense in a 12-0 rout of Ansbach on March 22.

Wiesbaden survived a season-opening scare to edge Black Forest Academy 1-0, and followed it up with a less anxious 5-0 win over Bitburg to preserve a season-long shutout. Vilseck’s inexperienced team, meanwhile, puts a 2-0 start on the line in the first Division I varsity action many of the new-look team’s players will have experienced.

All told, this weekend features the most intra-Division I competition during the regular season. Each of the remaining three active weekends before the tournament’s May 19 start pack just one Division I doubleheader apiece.