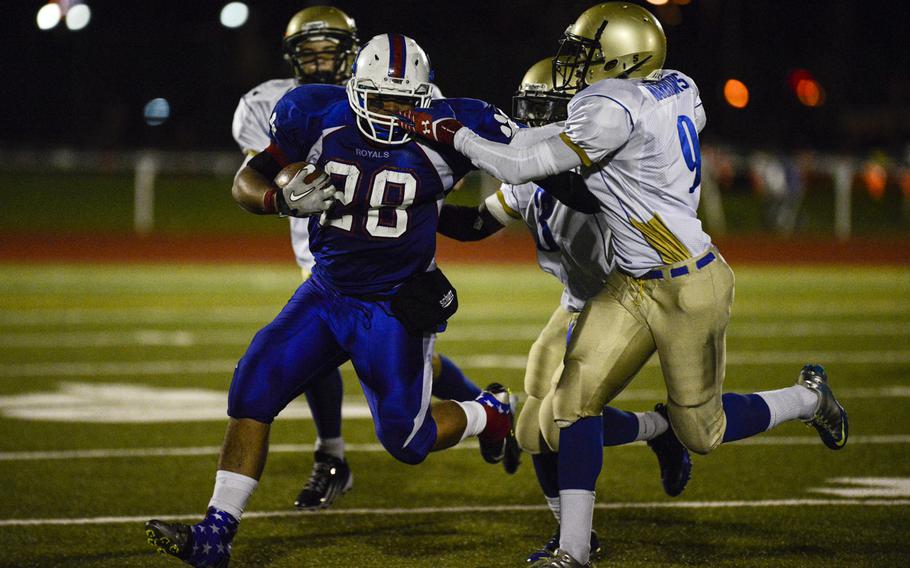 Buy Photo
Ramstein's Tevin Johnson is pushed out of bounds by Wiesbaden's Andrew Murray and Dequan Reed in the DODDS-Europe Division I football championships at Kaiserslautern High School Stadium, Germany, Saturday, Nov. 2, 2013. All three players have been selected to the 2013 DODDS All-Europe football team. (Joshua L. DeMotts/Stars and Stripes)

Poole leads nine Warriors onto the roster, the highest haul among the 15 schools represented on the roster. The Wiesbaden players were split evenly between offense and defense, with quarterback Reymoi Lewis and receiver CJ Pridgen among four offensive selections and senior linebacker Dequan Reed leading five Warrior defensive standouts.

All six Division I teams were represented on the list. Patch placed three players, Vilseck landed two and Kaiserslautern and Lakenheath netted one selection apiece. In all, Division I accounted for 23 selections. Nine of the 13 Division II programs were represented for a total haul of 25 players. Players from the Independent League, a four-team league playing nine-man football, were considered, but none were chosen.

Jonathan Skeesick's grade and Tony Saintmelus' school were incorrect in an earlier version of this article.