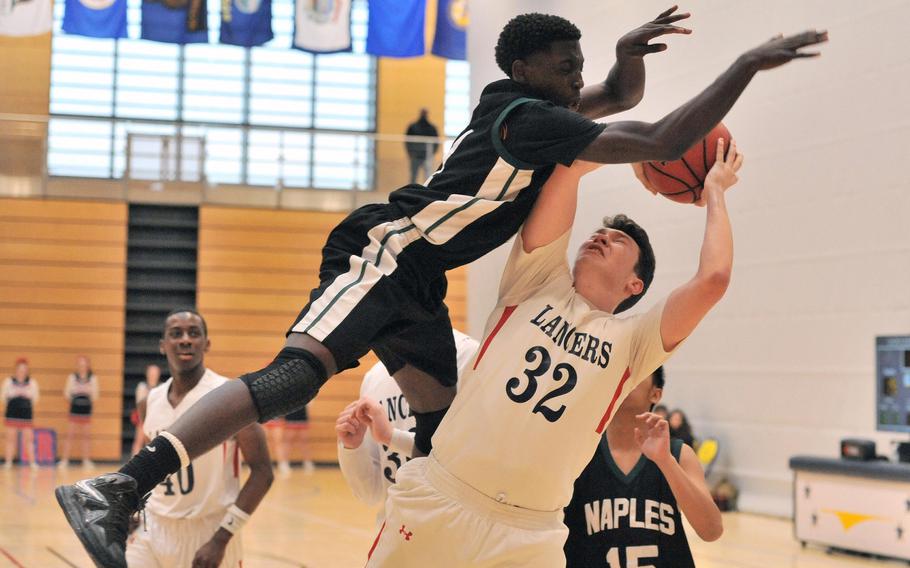 Naples' Tye Thompson leaps high to defend against Lakenheath's Daniel Uelman in a Division III game at the DODEA-Europe basketball championships in Wiesbaden, Germany. Thompson was called for a foul and the Lancers went on to beat the Wildcats 51-44. (MICHAEL ABRAMS/STARS AND STRIPES)

Naples' Tye Thompson leaps high to defend against Lakenheath's Daniel Uelman in a Division III game at the DODEA-Europe basketball championships in Wiesbaden, Germany. Thompson was called for a foul and the Lancers went on to beat the Wildcats 51-44. (MICHAEL ABRAMS/STARS AND STRIPES) Naples' Ashton Jeanty gets a shot off between Lakenheath's Adam Woolley and Daniel Uelman in a Division III game at the DODEA-Europe basketball championships in Wiesbaden, Germany. Lakenheath won 51-44. (MICHAEL ABRAMS/STARS AND STRIPES) Ansbach's Kevin Kamara looks to shoot against the Brussels defense of Zafer Ozkeroglu, left, and Kalani Villa in a Division III game at the DODEA-Europe basketball championships in Wiesbaden, Germany. Ansbach won 70-50. Watching the action at right is Troy Erwin. (MICHAEL ABRAMS/STARS AND STRIPES) 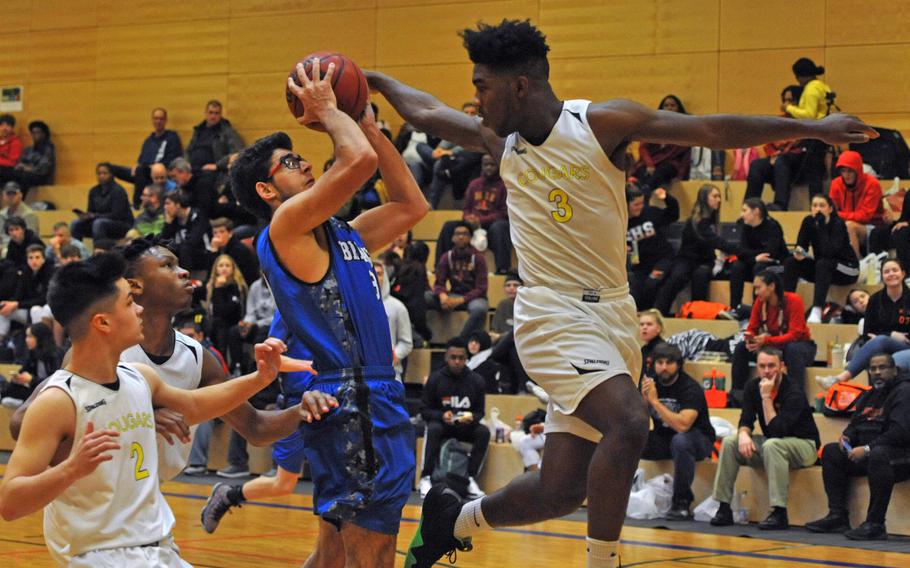 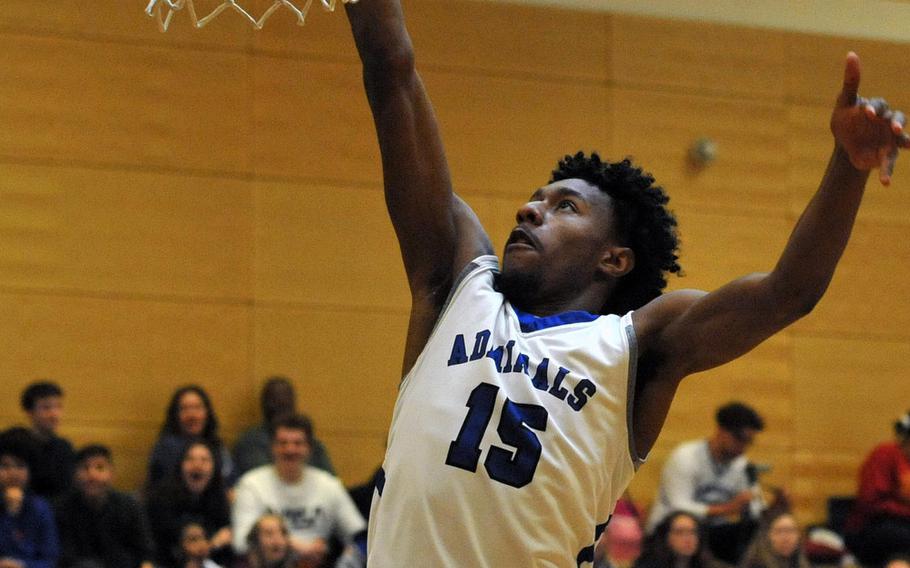 Rota's Antonio White scores on a fast break against AFNORTH in a Division II game at the DODEA-Europe basketball championships in Wiesbaden, Germany. Rota won 45-20. (MICHAEL ABRAMS/STARS AND STRIPES) AFNORTH's James Barata passes off to a teammate as Rota's Antonio Whitwe and Ygnacio Reyes, right, defend. AFNORTH fell to Rota 45-20 in a Division II game at the DODEA-Europe basketball championships in Wiesbaden, Germany. (MICHAEL ABRAMS/STARS AND STRIPES) Baumholder's Larry Wesley III goes in for a basket ahead of Sigonella's Kyman Murraine in the Bucs' win over the Jaguars in a Division III game at the DODEA-Europe basketball championships in Wiesbaden, Germany. (MICHAEL ABRAMS/STARS AND STRIPES) 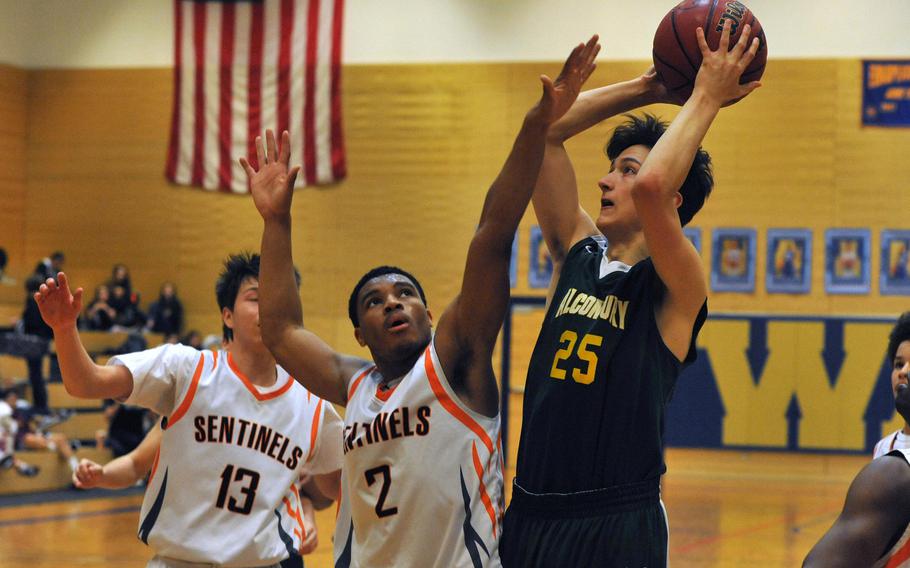 Alconbury's Thane Langley looks for a shot against Spangdalem's Deon Montgomery in a Division III game at the DODEA-Europe basketball championships in Wiesbaden, Germany. The Sentinels beat the Dragons 45-40. (MICHAEL ABRAMS/STARS AND STRIPES)

Four of the top five seeds in the large-school field advanced into Friday’s semifinal, led by unbeaten and four-time defending champion Ramstein. Top seeded Ansbach and three of the next four seeded teams moved on in Division III.

It took a tiebreaker system to determine two D-II teams to move on, though, after Marymount, Rota and Aviano ended up at 2-1 in Pool A. Point differential in the three games involving the three schools sent the top-ranked Admirals and seventh-ranked Royals into the next round.

Division IKaiserslautern 42, Wiesbaden 39: Both teams had already clinched spots in Friday’s semifinal. This game would determine which one grabbed the top seed – and avoided unbeaten four-time defending champion Ramstein on Friday.

Kaiserslautern was strong underneath and therefore shut down Wiesbaden’s speedsters and their chances for fast-break points.

Wiesbaden attacked inside more aggressively in the second half to get back into the game and the lead bounced back and forth until the end.

In the last 11.9 seconds of the game, it was a nail-biting end as the Wiesbaden fought to get the ball to score to tie or win the game, and Kaiserslautern struggled to keep the ball until the clock ran out.

Kaiserslautern succeeded in stopping Wiesbaden from getting the points they needed and barely secured the victory.

“We survived,” Raiders coach Corey Sullivan said. “Wiesbaden is a great team. They are always good. I am glad my kids gutted it out and I am real proud of them. They played like a team tonight and that is what won.”

“I am going to get my kids on the bus, take them home and put them to sleep,” Sullivan said. “And that is how we are going to prepare for tomorrow.”

Kaiserslautern 57, Vicenza 30: Earlier in the day, the Raiders clinched a spot in the final four by thoroughly dominating the Cougars.

Kaiserslautern’s strategy of putting a lot of pressure on the ball worked very well against Vicenza and gave the Cougars fewer chances to put the ball up.

The Raiders took a 10-point lead after a quarter and were not seriously threatened after that.

Wiesbaden 41, Vilseck 32: The Falcons’ 6-foot-4 Jonas Matthews used his height to put pressure on the Warriors inside. Unfortunately, it was not enough to stop the Warriors’ Roberto Eiseman and Tyrese Harris.

Eiseman connected on a three-point shot each quarter, and Harris led his team with 19 points.

The Warriors really began to shine in the fourth quarter when they picked up the pace after leading 29-24 entering the final period.

“We just keep looking at our mistakes and fixing those mistakes,” Eiseman said. “Our defense was doing well with picking up the rebounds and our offense did even better getting those additional points.”

Ramstein 38, Stuttgart 20: Both teams from Pool A had already clinched with a pair of victories on Wednesday. So they determined bragging rights and seeding when they played each other.

“As a team, we were just one,” Eaves said. “In the beginning of the season, we weren’t really talking much defensively, or as a team. Our coach told us that if we communicated better, things would open more and it worked. It allowed us to know exactly where we were at on the court.”

During the second quarter the Royals began to pull ahead. At one point, Eaves delivered a massive slam dunk during a solo fast break. That helped Ramstein build an 18-7 lead at halftime. The Royals expanded it gradually in the second half.

Division IIRota 45, AFNORTH 20: The second-seeded Admirals pointed themselves towards the semifinals after a thorough defeat of the sixth-seeded Lions.

Underdog AFNORTH stayed close throughout the first half and trailed by just four points at halftime. That kept the pressure on the Admirals, who had already fought off another hungry lower seed in a 44-42 defeat of No. 7 Marymount on Wednesday.

The Admirals did just that as they righted their ship after halftime. White scored 16 of his 21 points in the second half all while creating open looks for willing and able teammates on the perimeter.

“I drove to the basket, kicked to them a couple of times and we got some momentum going,” White said.

That momentum was briefly halted late Thursday as Aviano earned a 32-27 defeat over the Admirals, creating a three-way tie for the pool’s two semifinal berths.

Black Forest 45, Bahrain 40: The defending champion BFA Falcons handled the fifth-seeded Bahrain Falcons in another semifinal matchup rendered punchless by bracket mathematics. Both BFA and Bahrain clinched berths in the elimination round with defeats of American Overseas School of Rome, the third member of the three-team pool, on Wednesday.

Division IIIBaumholder 45, Sigonella 2: The defending champion Bucs yielded the tournament’s No. 1 seed to undefeated Ansbach. But they’re not ready to concede the championship.

The second-seeded Bucs sent a message with their dominant defeat of the Jaguars, scoring the first 29 points of a mercy-rule game that was never remotely competitive.

“The first thing we worked on was our press,” Bucs sophomore Chandler Pigge said. “Just trying to get that to perfection so we can get turnovers and get buckets easily.”

While scores like the Sigonella rout don’t suggest it, Baumholder has settled into its role as a challenger to the top-seeded Cougars, who beat the Bucs 60-42 in a December regular-season meeting. But the Bucs remain poised to protect their hard-won title turf as the elimination round begins Friday.

“We put ourselves as the underdog, looking to get back to that championship again and hopefully go back to back,” Pigge said.

That effort continues Friday as the Bucs face Brussels in the semifinals. Baumholder swept the Brigands by scores of 63-35 and 59-33 in a January doubleheader.

Third-seeded Spangdahlem clinched the pool’s second spot in the semifinals with a 45-40 defeat of Alconbury early Thursday.

Eddie DeJesus scored 14 points to pace the Sentinels, who are in their first year of Division III competition after years as a Division II contender. DeJesus hit six free throws in Spangdahlem’s 20-point fourth quarter to help secure the win and the semifinal berth.

Ansbach 70, Brussels 50: Thursday’s agenda in the other pool was as light as tournament days get, the pool’s two advancing teams having already been determined Wednesday. Those two teams met Thursday afternoon only to sort out semifinal seeding, with the favored Cougars recording the win, earning the higher seed and drawing Spangdahlem in the semifinals.