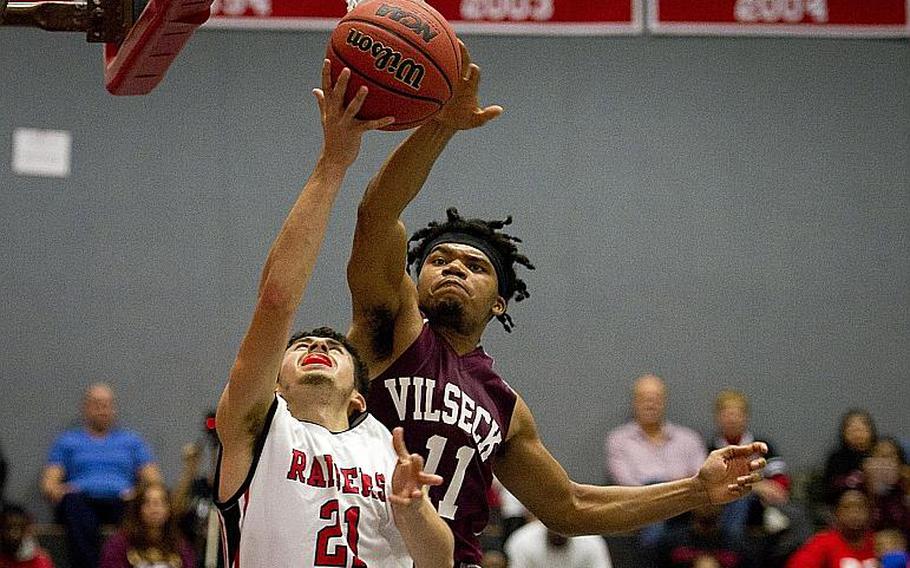 The DODEA-Europe boys basketball title reigns of Ramstein, Black Forest Academy and Sigonella are at risk this week as the four-day European basketball championships play out at sites around Wiesbaden, Germany. The tournament opens Wednesday and concludes with a slate of divisional championship games Saturday at Clay Kaserne Fitness Center.

Division I The Royals didn’t play like the team to beat in Division I early this winter. But that certainly changed as the reigning champions rounded into championship form at the expense of the Kaiserslautern Raiders and Wiesbaden Warriors, the same two teams Ramstein has beaten over the last three championship games.

An 0-2 start to the season, featuring lopsided double-digit to both Kaiserslautern and Wiesbaden, left the Royals looking like an exceedingly vulnerable champ. But Ramstein hasn’t lost since, avenged both of those losses and now returns to the postseason riding not just the momentum of three straight titles but 10 straight divisional wins.

Kaiserslautern lashed back at its nemesis in December, but a loss to Wiesbaden days later ended the team’s momentum, and a narrow 69-65 loss to Ramstein on Jan. 30 put the Raiders back in the familiar position of chasing their crosstown rivals.

The Warriors nearly ended the Royals’ title reign last year in a 48-46 decision that was just a bounce or two away from going Wiesbaden’s way. And the Warriors stayed atop Division I for most of this winter, protecting an undefeated overall record all the way through to a surprise Jan. 27 loss to Stuttgart. But Wiesbaden, too, fell victim to Ramstein’s pre-postseason surge, taking a 61-52 loss Feb. 9 that pulled the Royals back into first place.

Ramstein, Wiesbaden and Kaiserslautern are the clear elite teams of the division, notwithstanding Stuttgart’s defeat of Wiesbaden and Lakenheath’s doubleheader split with the Raiders. Those two teams, along with Vilseck, will look to break out of the division’s middle class and into Friday’s elimination round. Struggling Vicenza, Naples and SHAPE round out the nine-team Division I field.

Division II One of DODEA-Europe’s most compelling rivalries has played out in this division over the last two years, and a third entry in the series is a strong possibility this week.

The Rota Admirals cruised to the 2015-16 title, capping a dominant winter with a 71-43 rout of the Black Forest Academy Falcons in the divisional title game. The Falcons’ time came a year later as BFA’s experienced group outlasted a new-look Rota squad 46-32 for the title.

Should they meet again on Saturday, BFA appears to hold an edge. The Falcons beat Rota by scores of 52-49 and 46-27 in the teams’ January regular-season encounters.

Before advancing to a rematch, however, the two recent champions will have to navigate a field fraught with danger.

Spangdahlem joins 2-0 BFA as the bracket’s only team with an undefeated divisional record. The Sentinels were particularly impressive in an early February swing through Italy, where they dispatched Division II hopefuls American Overseas School of Rome, Aviano and Marymount.

Bahrain, which will again enter the tournament without a DODEA-Europe body of regular-season work, must nevertheless be considered a threat considering last year’s strong semifinal run.

Division III A prospective matchup of last year’s champion, the Sigonella Jaguars, and this year’s undefeated powerhouse, the Baumholder Bucs, has the potential to transcend the division’s small-school status and steal the show of Saturday’s championship slate.

While they’ll enter the tournament as strong favorites to advance to the finals, Sigonella and Baumholder have had very different winters.

The Jaguars have played just three divisional games this season, including a loss to the perennially solid Brussels. They’ve spent the bulk of their schedule intertwined with higher-division opponents, and bear the scars and middling overall record to prove it.

Baumholder, meanwhile, rattled off 10 divisional wins in as many games, methodically landing blows to all of their possible championship rivals - Alconbury, Ansbach, Brussels and Hohenfels - as the winter proceeded. All, that is, except for Sigonella.