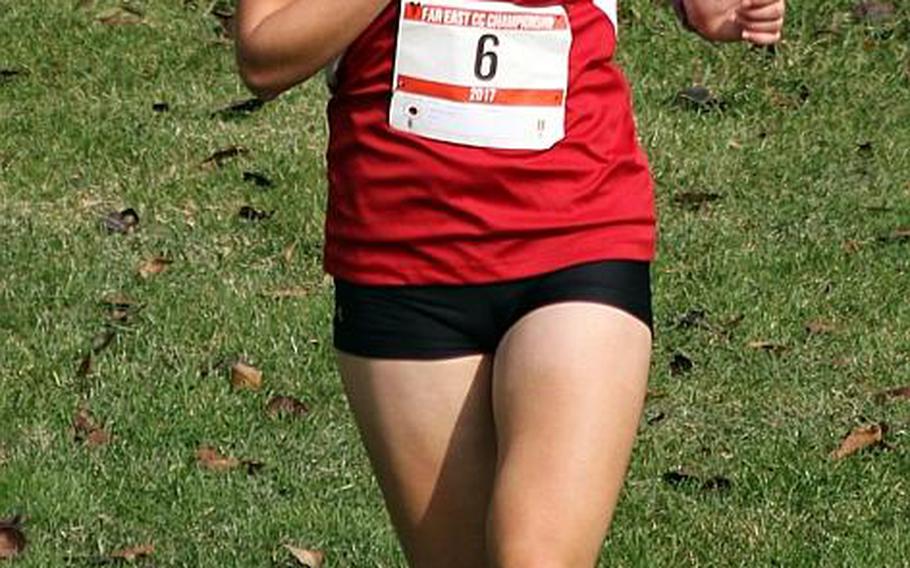 Nile C. Kinnick senior Taryn Cates-Beier ran the fastest time in the Pacific this season as well as winning the DODEA-Japan finals and the overall girls title in the Far East meet. (DeAngelo Galang/Special to Stripes)

It doesn’t matter if it’s on the cross country course, track or in class. Her coach and two closest teammates don’t hesitate to talk up the Nile C. Kinnick senior’s work ethic.

If she’s not running or training, she’s reading: “I’m an avid reader,” Cates-Beier says. Ask her what her least-favorite subject in school is, and she’ll say: “It’s hard to think of one; I like them all.”

And one might also find her playing ice hockey, which she has for eight years.

“She’ll do anything she wants to do, because it’s Taryn,” said coach Luke Voth, in his fifth season coaching the Red Devils. She’s been there three seasons after moving to Yokosuka from Hawaii.

“She’s as smart as they come, one of the hardest working people I’ve ever met, her parents are totally behind her, supporting her, pushing her and she believes in herself.”

And Cates-Beier is also rather quick on the course, if her times and placings in three races are any indicator.

She won three races this season, starting with a DODEA-Japan meet at Iwakuni, where she ran 19 minutes, 36.5 seconds, beating her personal best by 2:20. It was the fastest time by any runner in the Pacific this season.

Cates-Beier followed that with first place in the DODEA-Japan finals at Tama Hills Recreation Center. Just four days later, Oct. 25 at Misawa Air Base, she captured Division I and overall honors in the Far East meet, clocking 20:01.

For all that, Cates-Beier has been named Stars and Stripes girls high school cross country Athlete of the Year.

Cates-Beier insists that none of it would be possible without teammates Erin Stonebarger, a senior, and Rissa Eilmes, a sophomore, whom Cates-Beier and Voth say could be sisters were they not of different families.

“They’re each other’s biggest fan,” Voth said of them immediately after the Far East meet on Oct. 25.

“Because we go through everything together,” said Eilmes, who won two races that Cates-Beier did not during the season; Stonebarger had three top-three finishes. “We do every workout together, every ‘Killer Hill’ (at Tama) and we have each others’ backs.”

For her part, Cates-Beier says her times aren’t just for her, but to help bring out desire in her teammates.

“If I do my best, others will hopefully want to do their best, to work together to be their best,” she said. “It takes a team. Plus, you’re supposed to give it your all.”

Invariably, the three could be seen running close together; it would simply be a matter of which one would pick up the pace first and pull away, if not for a race win, then a top-three finish.

On Far East race day, Cates-Beier kept close to the pack for “less than a kilometer,” Eilmes said, “then I looked up and I saw she was gone.”

“I had prepared as best I could, and the race just happened as it did,” Cates-Beier said.

Cates-Beier’s efforts were not lost on rival coaches, who while paying attention to their runners said they couldn’t help but notice the one with the long blonde mane in red and white leading the field. Yokota coach Dan Galvin said it’s clear she goes the extra mile in training.

“Ninety percent of success in cross country is what you do in the off season,” he said. “She obviously put in the work over the summer. She had a fantastic year and was a great role model for all the younger runners.”