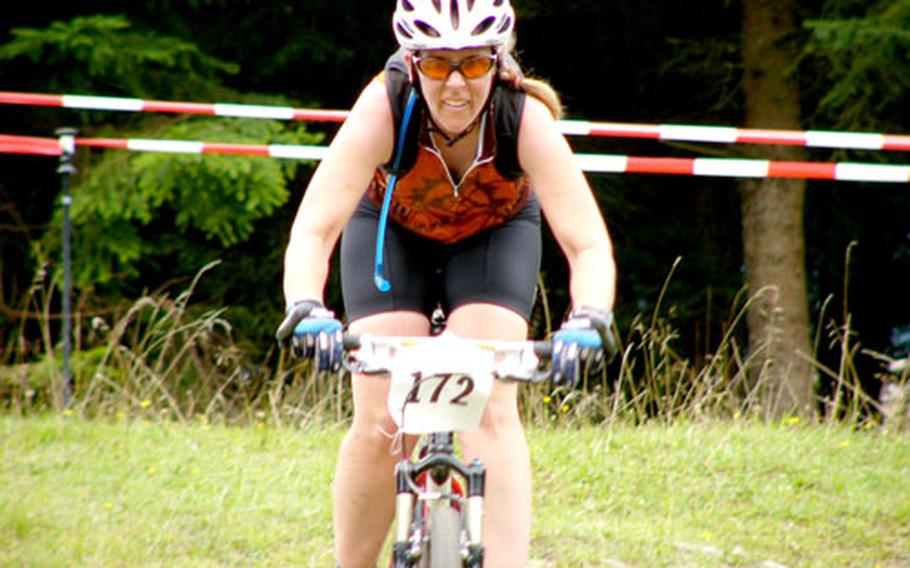 Leigh Plowman of Garmsich, Germany, kicks it home Saturday after completing a 20-kilometer ride through the woods during the Fat Tire Spectacular in Garmisch. (Rusty Bryan / S&S)

W&#252;rzburg&#8217;s Jack Cartwright and Darmstadt&#8217;s Katherine Freasier easily nailed down their second straight military open crowns. Cartwright had such a safe lead in the 12-stop series that he did not even enter Saturday&#8217;s race, and Freasier was the only competitor in her category.

The victory moved him up to third in the overall standings, but was not enough to catch the top two.

Freasier covered the 12-kilometer women&#8217;s course in 54 minutes, 16 seconds. Though unchallenged Saturday, she said nothing came easily this season.

Even so, she posted 61 points, awarded for finish position and participation, in the 11 races she contested to outdistance runner-up Lauren Hill of Aviano by eight points. Hill was deployed and unable to race Saturday.

Friedberg&#8217;s John Orsinger held a 21-point lead over David Haines in the division and went out trying to put his W&#252;rzburg rival away from the outset.

The course was tough for everyone, according to Garmisch&#8217;s Leigh Plowman, the Armed Forces Recreation Center director who laid it out.

Plowman returned to the event, which he inaugurated in 1986, after skipping last year&#8217;s race because of injuries. He clocked 1:04:46 for his run, fastest by a U.S. rider on Saturday. His victory in the civilian master&#8217;s division, ages 40-49, wrapped up the series title.

Fastest overall time of the day went to a German rider, Jan Schmidt of Grainau. He had a 53:59 to lead a trio of Germans who covered the distance in less than an hour and impressed civilian seniors series champion David Guth of Landstuhl.

GARMSICH, Germany &#8212; Top results posted by U.S. riders Saturday at the Fat Tire Spectacular, 12th and final stop in the 2005 U.S. Forces Mountain Bike Championship Series. Non-Americans not listed. Women rode three laps around a four-kilometer course; men&#8217;s events were five laps. Final standings based on points awarded for finish positions in each race, along with participation points for each race entered: