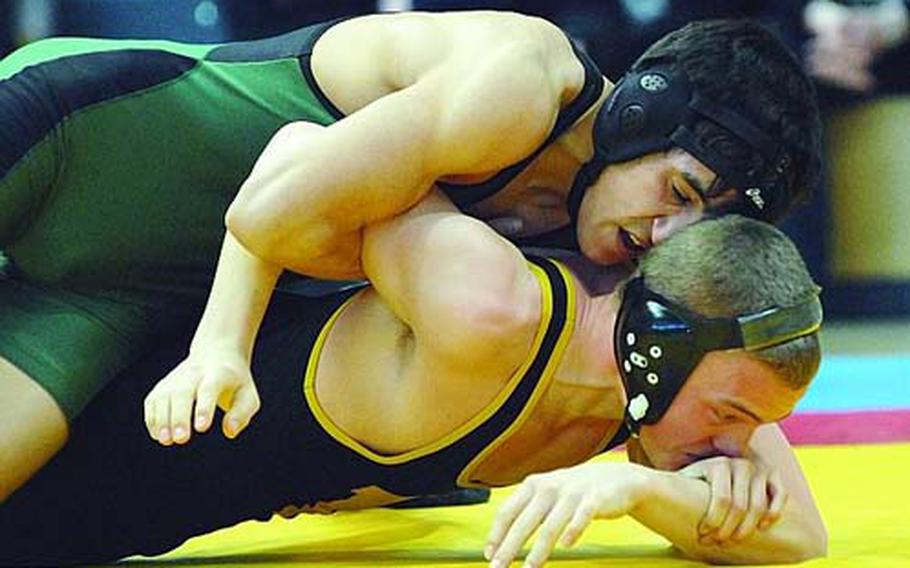 Chris Campos of Naples, top, puts the pressure on Hanau’s Aubry Blad in the 119-pound final in the DODDS-Europe wrestling championships in Wiesbaden, Germany, in February. Campos, who won the title, this year is aiming for the 125-pound crown, although last weekend he wrestled at 135 pounds in hopes of finding tougher competition. (Michael Abrams / S&S)

Eighty-two victories and one defeat ago, Naples senior Chris Campos &#8212; now a two-time European wrestling champion &#8212; was undecided about his future on the mats.

By his freshman year, Campos had made up his mind. He definitely wanted to continue. A soccer star who has wrestled only for Naples, Campos ignored his inexperience to romp undefeated through his debut season, which culminated in a European championship at 112 pounds in 2006.

His sophomore year began the same way, until the European 119 semifinals against eventual champion Chris Spencer of Wiesbaden. Spencer claimed a 6-3 decision and the distinction of being the lone high school wrestler to tame Campos, who was forced to settle for third place.

"It was kind of hard to deal with," Campos said Monday by telephone. "But I knew that it wasn&#8217;t going to happen again."

It hasn&#8217;t. Campos rolled undefeated to last season&#8217;s 119-pound European crown, thanks to that intensely competitive mind-set and a skills set perfectly adapted to wrestling.

Despite those traits, Campos wasn&#8217;t expecting quite so much of his debut season.

"Coach Hall taught me a lot," he said, "but I was surprised when I went to Europeans."

Looking for competition in his last go-round as a Wildcat, Campos wrestled at 135 pounds in winning five matches last weekend at Vicenza, four by fall and one by forfeit.

"I&#8217;m just looking to get better for Euros," he said about competing 10 pounds above where he&#8217;ll probably compete at Europeans.

But most of his competition comes from former college wrestlers, Vitullo said.

"His toughest matches come in the wrestling room," Vitullo said. "We have volunteer coaches who give him a good workout."

That&#8217;s fortunate, because DODDS-Europe doesn&#8217;t allow Naples to travel north of the Alps to compete against the wrestlers they&#8217;ll likely meet at the European championships.

"It&#8217;s definitely tough," Campos said of going cold into Euros. "I have no idea what the competition is like &#8212; just what I read in the paper. If we had a chance to wrestle, you can learn a little bit about your opponent."

No matter what, though, Campos, who said he hasn&#8217;t any firm plans to wrestle or play soccer in college, says he&#8217;s giving it all he has, again.