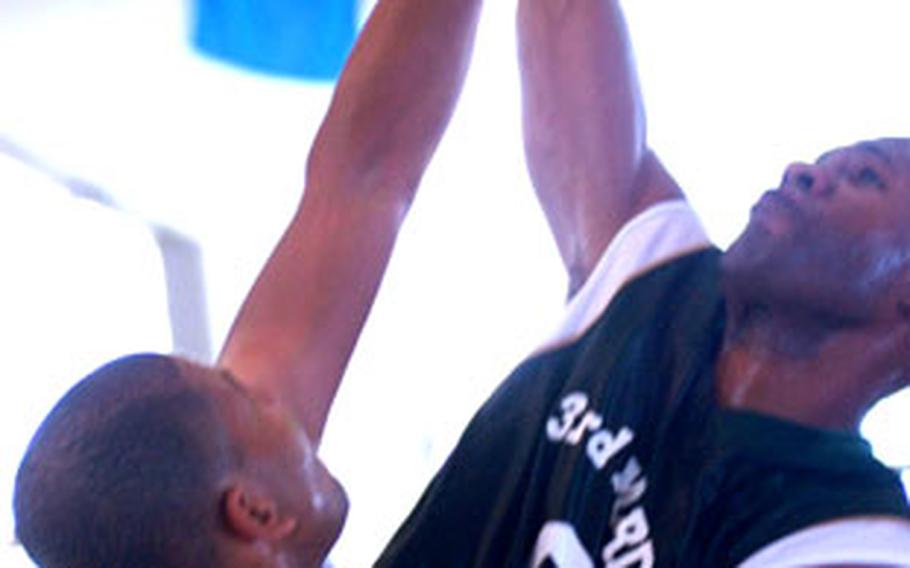 CAMP FOSTER, Okinawa &#8212; Host Marine Corps Base Camp Butler appears to have a major battle on its hands defending its two-time Marine Forces Pacific Regional Basketball Tournament title, if its opening game Tuesday was any indication.

Demetric Noble hit a free throw with 1 second left after a heatedly contested foul, and 3rd Marine Logistics Group escaped with a 79-78 edging of Base in a game called by the referees with 1 second remaining on account of unsportsmanlike conduct by both teams.

&#8220;To have a game end like that, I hate to see that,&#8221; said two-time reigning MVP Yonnes Sanders of Base after a game that saw 16 lead changes before the controversial ending.

With the game tied at 78 and time winding down, Noble dribbled into traffic and Base&#8217;s Burnett Miles, Marcus Dale and Sanders converged on Noble. Noble backed into Miles, who was whistled for reaching in for the ball with his right arm and banging into Noble&#8217;s side.

Noble sank the first of two foul shots, but as the two teams&#8217; players continued to jaw at the referees and at each other, game officials waved off the remaining second.

That game was the second of five round-robin contests played Tuesday and certainly the closest; the other four games&#8217; average victory margin was 31 points. Base coasted to victory in its next game, 97-56 over U.S. Naval Hospital Camp Lester, but in Sanders&#8217; mind, Base has its hands full.

&#8220;We have our work cut out for us,&#8221; Sanders said of a tournament that features three commands, 3rd MLG, 3rd Marine Division/Expeditionary Force and 1st Marine Aircraft Wing that play in the newly formed Joint Military Athletic Conference.

Their presence, plus Base with its two straight titles, will make the event that much tougher, Sanders and others said.

&#8220;Most of these teams are familiar with each other. We know how to score on and defend each other,&#8221; Sanders said.

Seven-time All-Marine guard Barry Celestine of 3rd MLG agreed with Sanders and Wheeler, saying that in his five years of playing on Okinawa, he&#8217;s not seen four teams this evenly matched. &#8220;This is different,&#8221; he said.

The to-the-wire battle between Base and 3rd MLG &#8220;is what you&#8217;ll see all week,&#8221; Celestine said of the five-day tournament to determine the regional champion and select six players to the All-Marine tryout camp Oct. 22-Nov. 1 at Henderson Hall in Washington.

Even more impressive in Celestine&#8217;s eyes was how Base came together so quickly and gave 3rd MLG a good game, despite Base not competing in J-MAC. &#8220;For them to play so well together for the first time, if they can do it, imagine what will happen when these other teams get together,&#8221; Celestine said.

In the grand scheme of things, Sanders said Tuesday&#8217;s loss to 3rd MLG really didn&#8217;t matter much, since it was a preliminary game, used to seed teams into the single-elimination playoffs, which begin Friday.