Michelle Rosas of Brussels drives by Alexis Nichols of Incirlik in the Division IV final at the 2006 DODDS European basketball championships at Mannheim on Friday. Brussels took the crown with a 36-23 victory. (Michael Abrams / S&S)

Michelle Rosas of Brussels drives by Alexis Nichols of Incirlik in the Division IV final at the 2006 DODDS European basketball championships at Mannheim on Friday. Brussels took the crown with a 36-23 victory. (Michael Abrams / S&S) 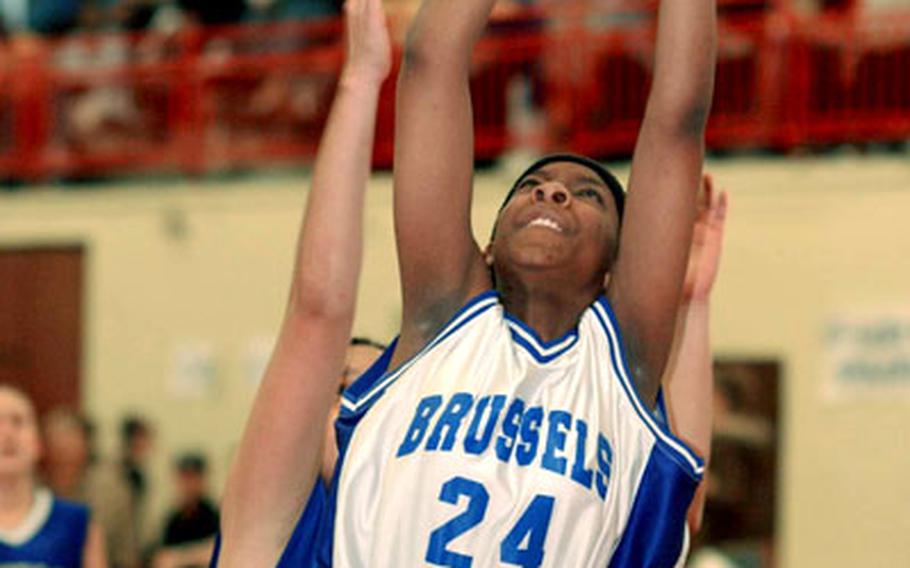 Reliesha Burns of Brussels gets off a shot in front of an Incirlik defender. (Michael Abrams / S&S) Brussels put a clamp on Incirlik&#8217;s comeback, holding the Hodjas to two points over the final three minutes, and won the DODDS-Europe Division IV championship 36-23.

Brussels had held its four previous opponents in the tournament to an average of 15 points, and it looked like the Brigands would cruise to the trophy.

They allowed Incirlik two baskets in the first half, and ran a patient offense that produced lay-ups and short jump shots.

Weatherbie, Burns and Michelle Rosas had each scored five points in a balanced attack.

&#8220;Everything we worked on during practice just started to come together,&#8221; Brussels co-captain Maria Baudoindajoux said. &#8220;We found each other out on the court, and we worked as a team.&#8221;

Though Incirlik had taken a beating, the Hodjas weren&#8217;t beaten, drawing confidence from the 15-point deficitt they had overcome in Thursday&#8217;s semifinals to beat Alconbury.

Chanelle Santos scored a quick basket &#8212; only Incirlik&#8217;s third of the game &#8212; and in the third quarter, Incirlik outscored Brussels. In the fourth, Jozalyn Ward, Incirlik&#8217;s 5-foot-3-inch sparkplug, scored all eight of her points and played tough defense, leading her team to within 28-21.