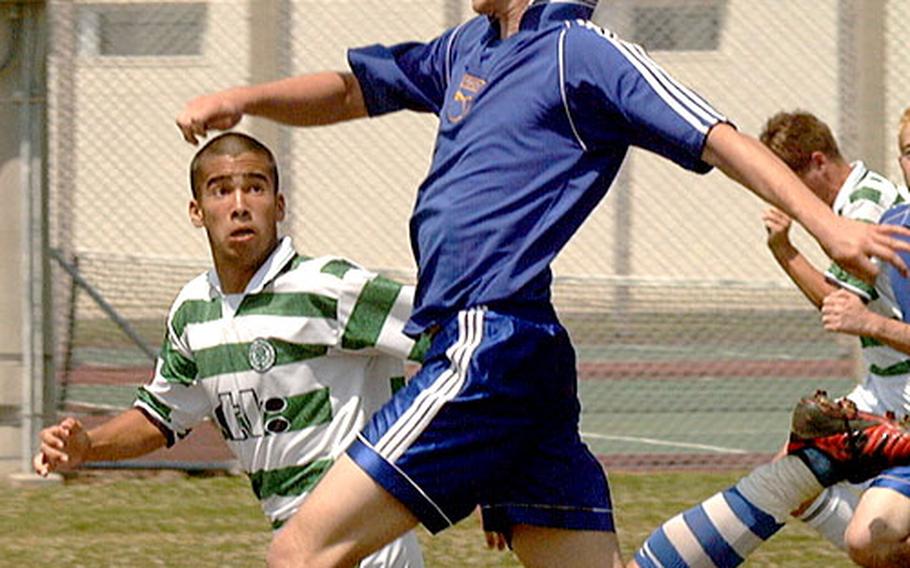 Two-time defending champion Kubasaki of Okinawa and runner-up Yokota of Japan played to a scoreless tie as round-robin play in the 2003 Class AA tournament got under way.

It was a sign of things to come this week, said the teams&#8217; coaches, who noted that two other Far East contenders, Zama American of Japan and Kadena of Okinawa, also played to a scoreless deadlock Monday.

&#8220;It was an excellent defensive effort by both teams, a very well-played match,&#8221; Pujol said. &#8220;There were opportunities to create scoring chances and nobody converted."

The Dragons had several near-misses in the second half, including shots by Josh Kiser, off a pass by Joe Paul, then Paul on a feed from Paul Young. Kiser later knocked a header just over the crossbar.

Likewise, the Panthers just missed a golden opportunity 15 minutes into the second half, when Ian Kingery took the ball just inside the penalty area and fired, only to have goalkeeper Brian Eisenmann knock it away.

If nothing else, each team came away from the game with renewed respect for one another.

The question for both coaches is whether they could use Monday&#8217;s match as a boost to get where each wants to be by Friday&#8217;s final.

Pujol paid a great deal of attention to the Kadena-Zama result, noting that Yokota fell to Zama 2-1 in a first-place JSL showdown a week ago. Monday&#8217;s scoreless draws, plus the Yokota loss to Zama, shows that the tournament&#8217;s top contenders are &#8220;pretty even,&#8221; Pujol said.

&#8220;But this is Monday, and teams tend to improve as the week wears on. I just hope we&#8217;re playing at the highest level Wednesday, Thursday and Friday.

(Jump ahead to Class AA)