Boys, girls team up to play soccer at Incirlik 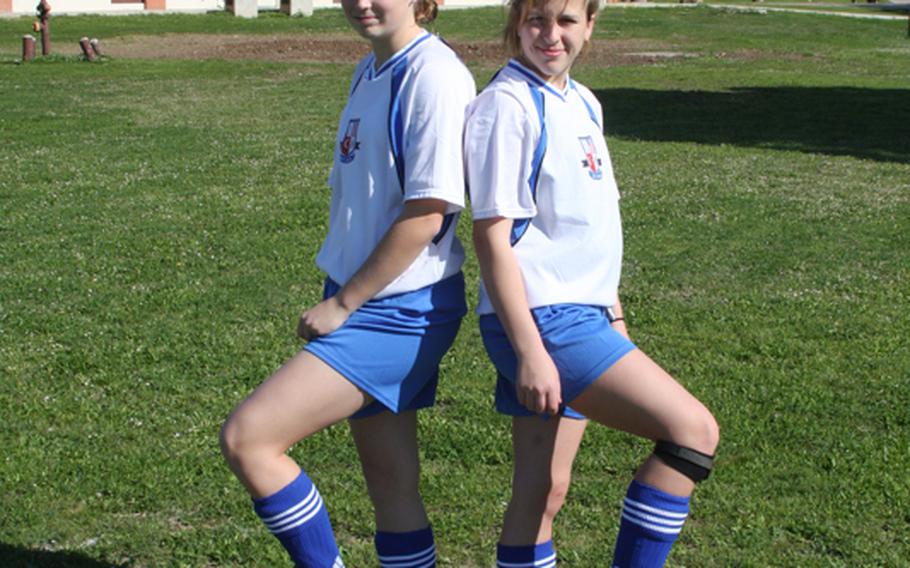 Buy Photo
Incirlik freshman Allyn Anderson, left, and her teammate Skyler Mineau, a junior, are members of Incirlik’s unisex soccer team. Incirlik and Lajes are the lone schools in DODDS-Europe to field co-ed teams this season. (Clinton Anderson/Special to Stars and Stripes)

When they moved to Turkey last year, Incirlik freshman Allyn Anderson and her junior teammate Skylar Mineau found themselves facing something more than the usual challenge of settling into a new school in an unfamiliar country.

Soccer enthusiasts both, Anderson and Mineau had to adjust to a different game than the one they had come to love. If they wanted to play high school soccer in 2011, Anderson, who transferred from Japan, and Mineau, an import from Virginia, would have to do it as part of a co-ed team, playing boys teams every game. Incirlik , enrollment 58, doesn&rsquo;t have enough players to field separate boys and girls teams.

&ldquo;I thought it&rsquo;d be really fun,&rdquo; the 5-foot-1-inch, 110-pound Mineau, 16, said about playing on a boys team. &ldquo;We used to scrimmage boys teams back in Virginia.&rdquo;

Ditto for Anderson, a 14-year-old who&rsquo;s been playing the game since she was 5.

&ldquo;It&rsquo;s fun,&rdquo; Anderson said of playing on a unisex team. &ldquo;You have to work harder.&rdquo;

But Anderson did admit to some obvious trepidations before joining the mostly male team.

&ldquo;Sometimes it&rsquo;s scary,&rdquo; said Anderson, who like Mineu is a midfielder and defender. &ldquo;They have bigger kicks. I usually kind of duck.&rdquo;

But the boys&rsquo; physical advantages of greater speed and strength tend to decrease with familiarity, she added.

Other than that, however, coaching a co-ed team is not much different from coaching separate boys and girls squads, coach Anderson said.

&ldquo;It&rsquo;s pretty much the same,&rdquo; he said. &ldquo;We run the same type of show.&rdquo;

The curtain went up for Incirlik&rsquo;s 2011 show Saturday, when the Hodjas took on a Turkish boys team. They lost 7-6, coach Anderson reported, despite three goals by Tamer Long. Anderson celebrated her adjustment to high school and co-ed soccer by assisting on one of Long&rsquo;s goals and scoring one of her own via a feed from Long.

To the elder Anderson, the game was a source of encouragement.

&ldquo;In a big school, you might have seven, eight or nine solid players,&rdquo; he said. &ldquo;In a small school, you can get by with two or three.&rdquo;

Anderson might have found more than his two or three in Long, his daughter, and the pair&rsquo;s fellow goal-scorers &mdash; Aaron Whitaker, Devonte Davis and Ty Murphy.

He said Incirlik&rsquo;s remoteness makes it hard to assess how competitive his team might be when it journeys to the Kaiserslautern area for the European Division III boys tournament in May.

&ldquo;You don&rsquo;t get to see the competition,&rdquo; he said. &ldquo;We play at Ankara (this weekend). Ankara won it all last year, so we&rsquo;ll see how we match up.&rdquo;

The lack of regular competition of the kind enjoyed by most schools in DODDS-Europe is annoying, but not insurmountable, according to Mineau, who helps out with Youth Services teams in the off-season.

&ldquo;It&rsquo;s frustrating,&rdquo; she said. &ldquo;I&rsquo;d like to play more games, but there are lots of ways we can practice.&rdquo;

And to make the best of an unusual situation.