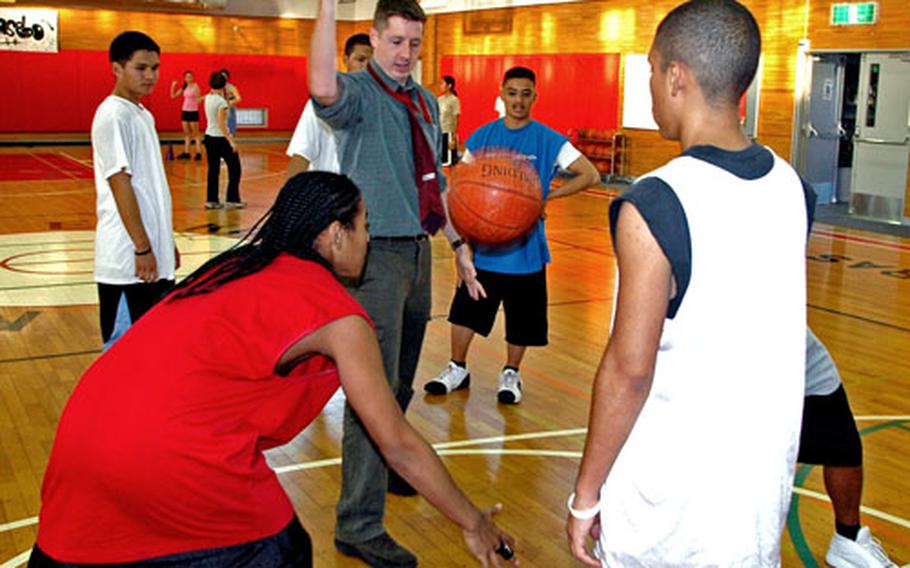 The Robert D. Edgren Eagles from Misawa Air Base have competed the past 20 years in Far East basketball tournaments for large-school teams. They even reached Center Court in 1986 and 1998.

But an enrollment drop &#8212; almost 100 over the past three years &#8212; brings a change of Far East tournament venue. The Eagles will play in February&#8217;s Class A tournament for small schools at Marine Corps Air Station Iwakuni in southwestern Japan.

Department of Defense Dependents Schools-Pacific interscholastic sports policy sets 340 as the enrollment cutoff for Class A eligibility. Edgren began the academic year with 292 students, Johnson said. Even so, DODDS-Pacific gave the school the option of remaining at the large-schools level.

&#8220;We had our athletic community &#8230; weigh the pros and cons and we decided to enter the small-schools category,&#8221; Johnson said. The decision is open to review at the end of the school year and Edgren could return to Class AA if its enrollment increases.

For Eagles basketball, said Johnson and coach Andre Thibert, the move is win-win. Team members will play in the tournament against teams of similar enrollment and playing ability, after getting a full season of fire-testing against Japan&#8217;s Class AA teams.

&#8220;We&#8217;re still playing Class AA schools,&#8221; Thibert said, &#8220;which is great because we get some good competition heading into Far East.&#8221; He pointed to last season, when the Eagles finished third but succumbed to lack of depth in Class AA tournament.

In a small-schools tournament, Thibert said, the Eagles in theory would be among teams with similar personnel issues, depth and school enrollment. &#8220;It makes it more of a level playing field.&#8221;

Just being a formerly competitive Class AA program may not guarantee success in Class A. Edgren still must get past resurgent Taegu American, with its solid veteran class; Pusan American with All-Tournament luminaries Moses Joh and James Edwards and international powers such as defending Class A champion Faith Academy of Manila.

Thibert and the Eagles face a test right out of the gate: Hosting defending Class AA champion Yokota on Friday and Saturday. &#8220;If we can do well against Yokota and Nile C. Kinnick, we should do fairly well at Far East,&#8221; Thibert said. &#8220;This will be interesting. This will be fun.&#8221;

Outlook: Reloading/contending. Wilson hopes the momentum of winning KAIAC boys volleyball league and tournament title will carry over into basketball.

Outlook: Contending. Lacking depth, lost six seniors from last year and plenty of newcomers. Loyd says if the veterans contribute, Panthers can have another good season.

Outlook: Rebuilding. Steep drop from the days of Steven Davis, A.J. Scott and Terry Stephens and the 2003 tournament title, but Collins feels his young group is eager to work hard and become competitive sooner rather than later.

Outlook: Rebuilding/reloading. Lost two-time All-Far East guard Draonne Johnson. Plenty of youth to take his place. Perhaps a year away from challenging in JBL and Class A.

Outlook: Rebuilding. All five starters from last season departed. Holdovers Clark and Redick should be tough inside, Narciso has potential as a playmaker, Marshall and Rodriguez are aggressive defensively and should create good scoring chances for Duncan and Schuck, both of whom are good shooters. Coach Duncan feels his team will be a Class A title contender.

Outlook: Rebuilding-reloading. Move to Class A from Class AA will benefit a team that plays JBL large-schools opposition much of the season, and tough Japanese teams in Tokoku region. Height, among a handful of newcomers, is a rare commodity this season for Thibert.