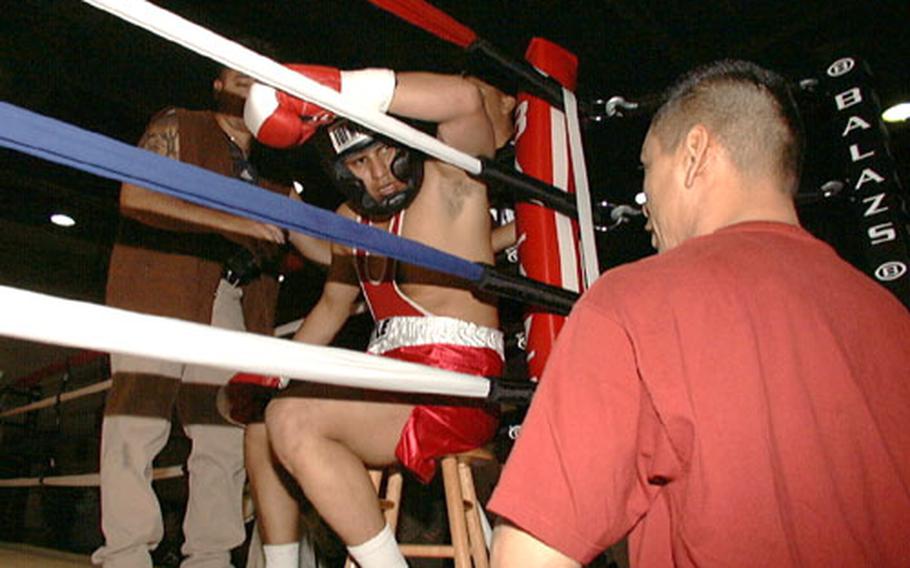 At Camp Walker in Taegu last month, Army Spc. Robert Flores, left, faces Johnny Dockery during the debut of the Army boxing program for lower South Korea. The debut was a success, and planners are moving forward to build up the program. (Franklin Fisher / S&S)

TAEGU, South Korea &#8212; They were well into the first round, and the crowd was shouting advice &#8212; but coach Miguel Marquez was frustrated.

Marquez wanted him to go in hard on his opponent and hammer him aggressively, without holding back. But his guy, Army Spc. Robert Flores, wasn&#8217;t taking hold.

It lasted not one but two rounds that Saturday night last month at Camp Walker&#8217;s Kelly Fitness Center Gym.

Finally, Flores realized his mistake. In the third round, he went on the attack, knocking down his opponent, who was back up quickly. But it wasn&#8217;t enough, as Flores&#8217; more active foe won by decision.

Hardly discouraged, Flores said it taught him a lesson. He&#8217;s now more determined than ever to stay with the Army&#8217;s new boxing program in lower South Korea.

&#8220;I&#8217;d like to win the next match,&#8221; said Flores, a military police officer with the 728th Military Police Battalion in Taegu. &#8220;I just gotta fight smarter. I thought I probably could have won that last fight if I could have just gone after him sooner. I have to listen to my corner. Coach Marquez knew exactly how to beat him and I wasn&#8217;t going along with that, and that&#8217;s why I lost.

So are the program&#8217;s organizers, who saw the March 8 debut card draw the biggest crowd in memory for any Kelly gym event. Encouraged by that, they&#8217;re mounting some big steps to expand and promote the fledgling organization, said Melvin Gaither, the 20th Support Group&#8217;s chief recreation officer.

They plan to stage the next big tournament on July 4, outdoors on nearby Kelly Field.

Officials are also trying to establish a training facility at the Army&#8217;s big logistics base on Camp Carroll in Waegwan, Gaither said. They&#8217;re hoping to line up a coach who would do at Waegwan what Marquez does in Taegu.

They&#8217;ll contact unit commanders in hopes of stirring up interest in the local program. Many have said they&#8217;d support it, provided the appropriate training and medical safeguards were in place.

And they&#8217;ll explore the possibility of setting up bouts between company and battalion-sized units in Area IV. That would not only enhance troop fitness and unit pride but could also enlarge the fighter pool for area-wide events, such as the one set for July 4.

Meanwhile, an Army medical unit in Taegu is providing treatment teams at ringside, as it did on March 8.

&#8220;Before the last event, we mentioned it to the company at formation, and we will continue to do so for future events,&#8221; said Maj. Tzvi Robbins, commanding officer of Headquarters and Support Company, 168th Medical Battalion, at Camp Walker.