Bouncing back from a serious injury 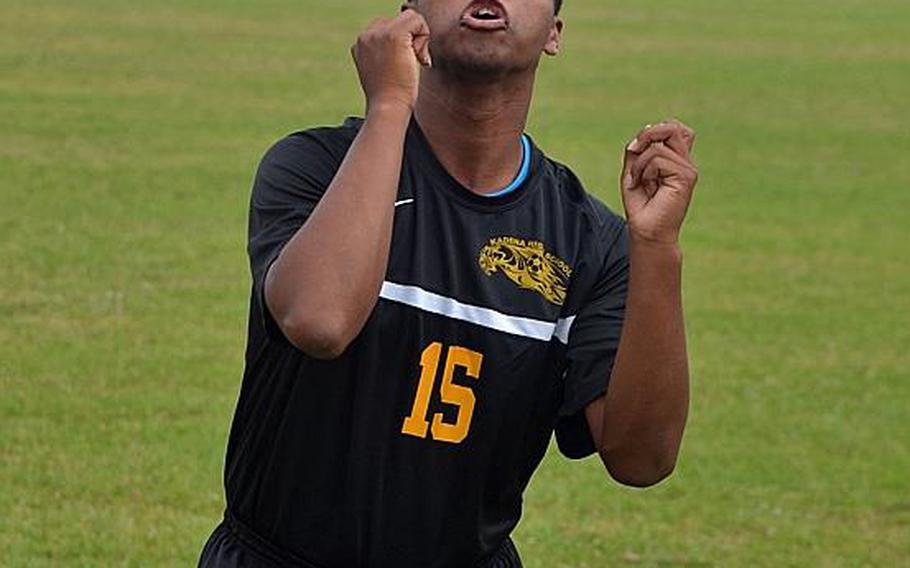 Krysta Brun/Special to Stars and Stripes Daegu senior defender Monica Morales, shown kicking against Taejon Christian International, took nearly a year to return from a torn anterior cruciate ligament suffered in a match April 3, 2013 against the same Dragons at TCIS. ()

Monica Morales could not have felt any worse. Her Daegu girls soccer team was losing 3-0 at Taejon Christian International on April 3, 2013, when she tried to kick the ball ahead to a Warriors forward, only to have a Dragons player kick it behind Morales.

Her body twisted around to chase the ball. Except for her left leg, which remain planted. She heard the knee pop and down onto the TCIS field turf she went, with a torn anterior cruciate ligament.

Following surgery on May 28, she couldn’t navigate the seven steps from bed to bathroom without crutches.

“I was used to the wheelchair and just wheeling around, but … I had to use crutches for the first time and it felt horrible because of the weight of my leg and I just started crying,” Morales said. “I didn’t want to feel that every again, which made me push harder in rehab.”

Her story mirrors that of fellow senior defender Kevin Vaden of Kadena, who last October was playing for Meat FC, a club team comprised mainly of Kadena and Kubasaki alumni. He got pulled down in a match with another club team, his body going one way and the left leg another.

“At first, all I heard was a pop, then my knee felt numb for a little,” Vaden said. “I knew something was wrong. I couldn’t stand up. I tried crawling off the field, but I couldn’t, so I just rolled.”

While Morales’ injury occurred in her junior year and Vaden his senior year, each worried they might remain sidelined.

“I’m thinking it’s my senior year and I have a torn ACL and I don’t think I can play soccer this year,” Vaden said. “But I thought maybe I could fight it and rehab right.”

“I felt completely heartbroken,” Morales said. “I knew something was wrong, but of course, I thought like every athlete that would get hurt and I was in denial. I didn’t want to believe I was hurt or that I wouldn’t finish my season. I walked around as if nothing was wrong.”

Medical Web sites refer to the anterior cruciate ligament as the most critical component of a knee for athletes who play sports that feature lateral movement such as soccer, basketball and football.

Rehabilitation can take from six months to a year, and involves strenuous resistance exercises such as weightlifting and treadmills. Some sites recommend swimming for rehabilitating athletes; water causes as much resistance as the aforementioned methods.

If anywhere Morales’ and Vaden’s stories diverge, this is where.

While it took Morales nearly a year to return to the pitch, on March 21, Vaden’s rehabilitation took just 4½ months. The same sampling of online medical journals say rehab time can differ from athlete to athlete depending on the extent of the injury and the work they put into it.

“Stressful and draining,” Morales described her therapy. “It was a hard process for me. Just for the fact that I’ve never gone through such a big injury and I had no idea what to expect.”

She did wobble-board exercise and hamstring and quadriceps exercises in addition to weights. Vaden, meanwhile, did push-weight exercises, leg presses and leg curls, slow walking on the treadmill and 10 minutes on the exercise bicycle.

Poetically, Morales’ comeback took place on the same field where she suffered the injury. Daegu played TCIS to a 1-1 draw in that match. Vaden’s return came in Kadena’s 2-1 win over Konan in the second game of a double-header on April 12; he lined up at left fullback.

“I was more nervous about my performance than getting hurt,” Morales said, adding that there’s no voice in her head telling her to be cautious. “It felt amazing finally putting on my uniform and playing with my team again.”

Vaden’s presence “can only make the team better,” Panthers captain Yuji Callahan said. “He’s very smart. He knows where to be and he has good positioning. He also has great kicking skills. He can kick the ball precisely and far.”

Aside from leadership and maturity, Morales’ return can serve as an example to other athletes or students who, when seeing what she went through, make their problems seem much smaller.

“She played football and she fought through a pretty serious injury to get back on the field,” Daegu athletics director Ken Walter said. “She’s an inspiration to a lot of the girls. Here’s a girl who came through a lot more than I have.”

Asked what advice he would offer one rehabbing from a torn ACL, Vaden said it’s equal parts physical and mental.

“Keep your leg moving, keep your knee exercised, but don’t overdo it,” he said. “And don’t give up. At some points, I thought I might as well give up rehabbing because I might not play, but keep pushing yourself to actually rehab, keep going and you know you’ll make it.”