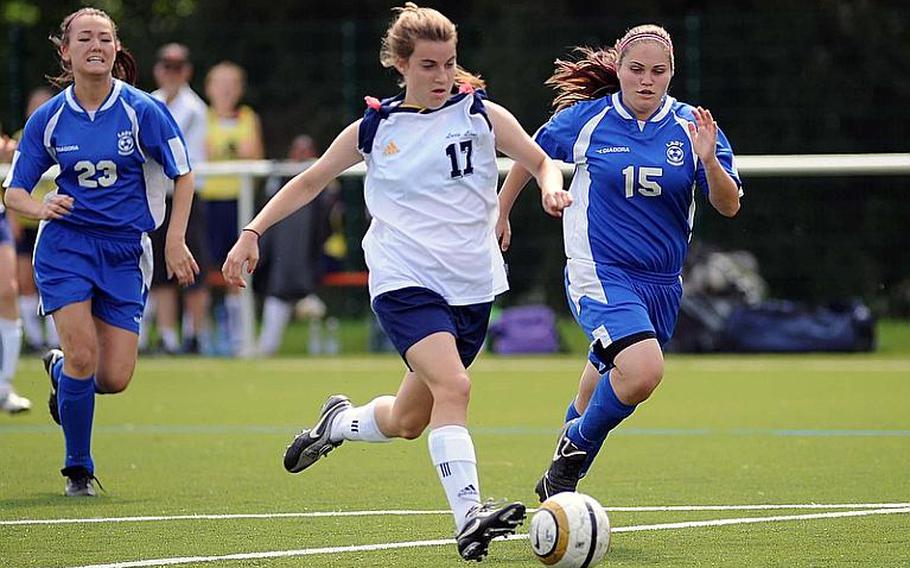 Heidelberg's Madison Stephens gets away from Wiesbaden's Mackenzie Jefferson, right, and Michelle Schonberg, left, to score a goal in the Lions' 5-2 win over Wiesbaden in opening day action for Division I at the DODDS-Europe soccer championships. (Michael Abrams/Stars and Stripes)

Heidelberg's Madison Stephens gets away from Wiesbaden's Mackenzie Jefferson, right, and Michelle Schonberg, left, to score a goal in the Lions' 5-2 win over Wiesbaden in opening day action for Division I at the DODDS-Europe soccer championships. (Michael Abrams/Stars and Stripes) 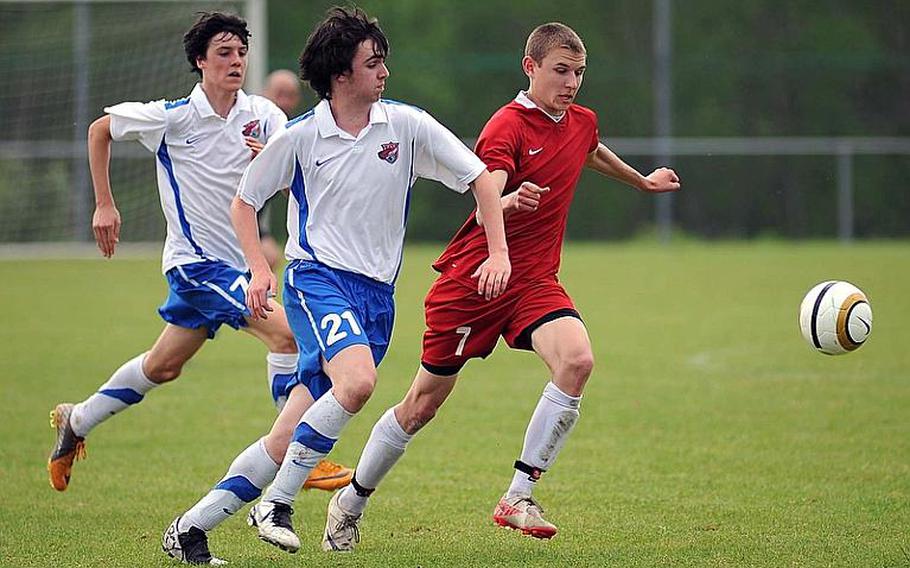 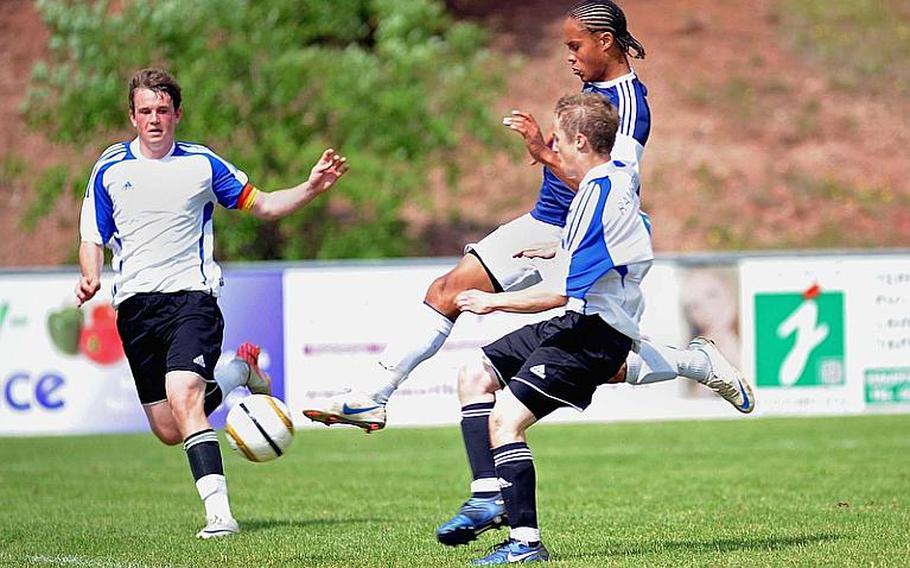 Heidelberg's Daniel Morris, gets past Ramstein's Tim Taylor, right, to score the final goal in the Lions' 4-2 win over the Royals in opening day Division I action at the DODDS-Europe soccer championships. It was one of three upsets on the day. (Michael Abrams/Stars and Stripes) 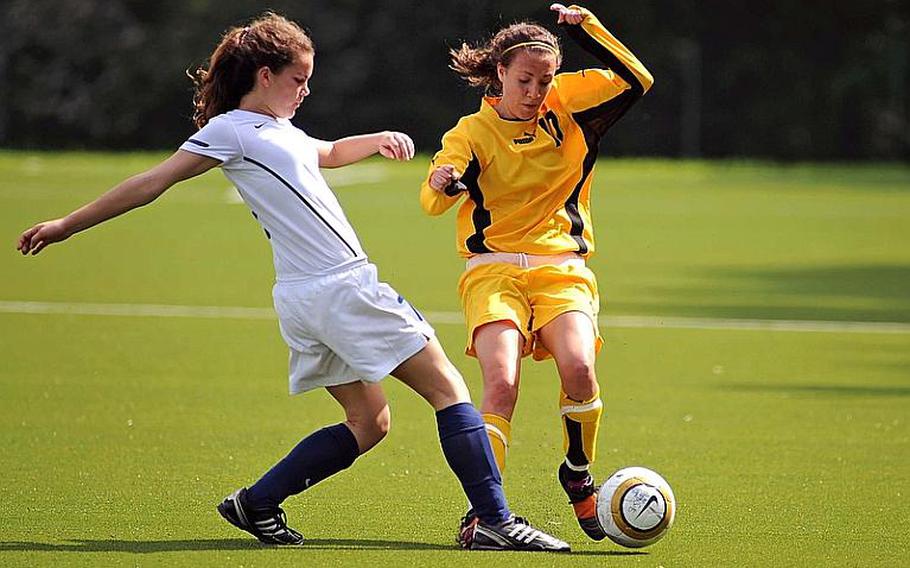 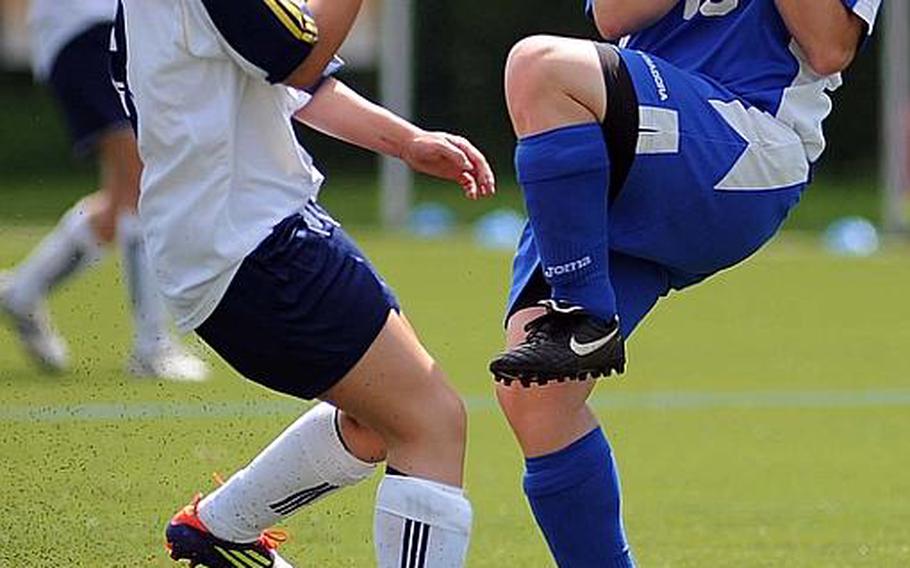 The Patch boys, seeded sixth in the eight-team tournament, played just as well as their female Panther counterparts, the defending champions.

Patch started its day by upending No. 3 Vilseck, 1-0. And finished it by topping No. 2 Kaiserslautern by the same score.

But those weren&rsquo;t the only upsets.

Ramstein, the defending boys champs and fourth-seed this year, initially looked like it was in control in a match against Heidelberg. The Royals were nursing a 2-1 lead in the second half when Heidelberg junior Andrew Guelle knocked in the equalizer. Geulle wasn&rsquo;t done as he quickly hit the left corner to give the Lions the lead.

Senior Daniel Morris sealed the deal for the fifth-seeded Heidelberg club, hitting a shot to secure the 4-2 victory.

&ldquo;Oh my goodness, not again, not for the fourth time in a row,&rdquo; Morris said he was thinking as the Royals jumped out to the lead early in the game with a ripping shot by sophomore Brienno Illari. The Royals have owned the Lions in recent years.

Guelle said it was intimidating playing the defending European champions, but the win took a big weight off the Lions&rsquo; shoulders. They wouldn&rsquo;t score a second upset, though, falling later in the day to top-seeded International School of Brussels, 4-1.

Ramstein was able to keep its title defense hopes alive, at least for another day, by defeating Lakenheath, 4-2. To advance in the tournament, the Royals face a must win against ISB on Wednesday.

&ldquo;It was a rough start to the tournament, but we bounced back,&rdquo; said junior Cristian Turain, who scored the first goal against the Lancers.

The Royals were anxiously awaiting word about their team captain, James Cho, who was taken to the hospital after being injured in the first game. Turain said the team heard he may have a fractured kneecap, but the team wasn&rsquo;t able to confirm the diagnoses.

The Patch boys set the tone with their upset of Vilseck in the day&rsquo;s first game. A goal by junior Seth Waller gave Vilseck a rude awakening to the tournament.

Patch weathered some cannon-like attempts on goal from Vilseck junior forward Sage Thronbrugh early and the net remained an elusive goal the rest of the afternoon for the Falcons.

Waller said he was lucky to get his shot off after the ball deflected off a Vilseck defender.

&ldquo;We can&rsquo;t let this get to our heads, we really have to stay focused,&rdquo; Waller said.

Vilseck later bounced back by knocking off Wiesbaden, 5-0.

In D-I girls action, top-seed Patch is seeking a three-peat. Tuesday&rsquo;s blankings of ISB and Vilseck - 5-0 and 3-0 - respectively, proved that for any of the other teams wanting to knock the Panthers off the throne, scoring a goal against Patch&rsquo;s potent defense may prove to be the toughest challenge. In fact, the Panthers gave up just one goal all season.

Junior Caroline Rivera, one of Patch&rsquo;s captains, said the Panthers are playing every game like it&rsquo;s the championship game, but acknowledged that they do have targets on their backs.

Senior captain Emma Murray, who scored a goal in each of Patch&rsquo;s Tuesday games, agreed and cited the Panther&rsquo;s team motto instilled in them from their coach.

Hot on the heels of Patch is No. 2 seed Ramstein. The Royals are the other D-I girls team to finish undefeated on the season.

Following a 4-0 thumping of Lakenheath, Ramstein star Josie Seebeck, who scored three of the team&rsquo;s points in the game, said their game plan is possession and working together as a unit.