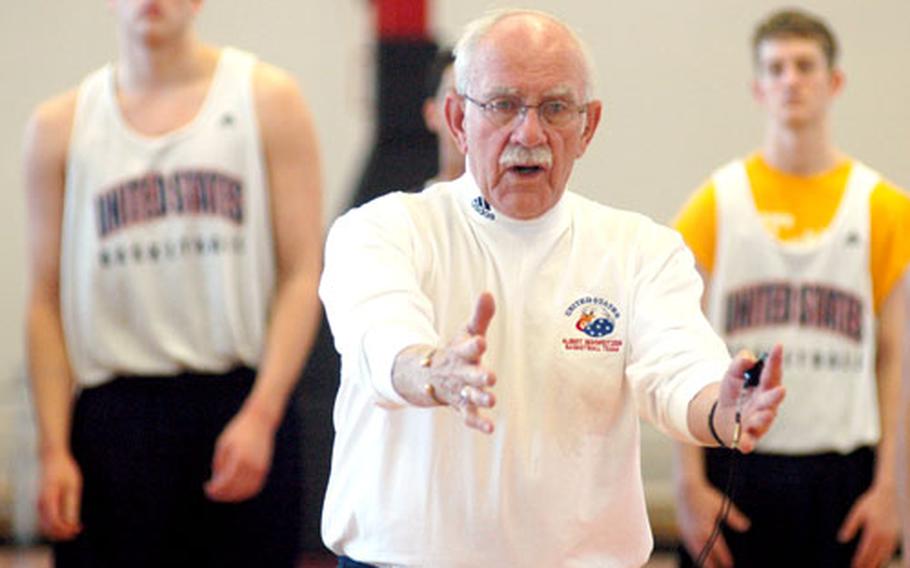 MANNHEIM, Germany &#8212; Look for the U.S. team to push the ball up the floor when the 23rd Albert Schweitzer Tournament tips off in Mannheim, Germany on Saturday.

McCann, who is coaching the team for the 16th time, said there is up-tempo material throughout the lineup.

All three are juniors, but Jackson already has committed orally to Syracuse and Aldrich to Kansas.

Joining them on the break will be Scoop Jardine, a classmate of Jackson&#8217;s at Philadelphia&#8217;s Neumann-Goretti High School.

McCann is hoping the running game and team chemistry will help the Americans add to their record 10th title, which came 10 years ago. Two years ago, the U.S. finished fifth.

Jardine, who, like Jackson, has committed orally to Syracuse, has built-in camaraderie with his past, present and future teammate.

McCann is banking that brotherly feeling will translate into team play. His players will need to play together against the ever-improving international teams.

As he has in every tournament since 1975, McCann has 12 practices in six days to mold a team to take on teams that play together for three or four months each year. Some, like this year&#8217;s towering entry from Australia, play together year-round at sports academies.

The teams are divided into four pools, with the top two from each advancing into a championship group and the others falling into a consolation group for additional play.

Fans can get an early, free look at some future college stars when the U.S. Albert Schweitzer Tournament team scrimmages China at 6 p.m. Thursday at the Benjamin Franklin Village Sports Arena in Mannheim, Germany.

There will be a meet-and-greet session with the team following the game for fans wanting autographs or to wish the team well in the tournament for under-18 junior national teams.

The Americans begin play in earnest at 6 p.m. Saturday against Croatia. They then face Israel at 8 p.m. Sunday, and Spain at 8 p.m. Monday. The Americans compete cross-pool play Wednesday and Thursday. Semifinals are scheduled for Friday, with consolation and championship games Saturday.

All games involving the U.S. will be at the Sports Arena in Mannheim.

The Rhein-Neckar USO on Sullivan Barracks in Mannheim is selling advance tickets for the tournament. Its telephone number is DSN 385-3668 or German civilian 0621-730-3668.

Daily tickets also will be available at the door one hour before game time.