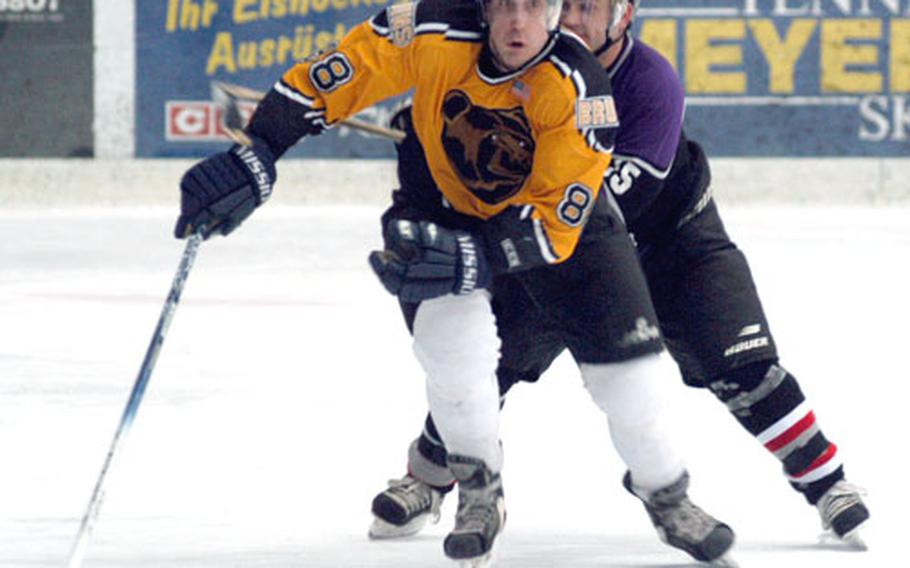 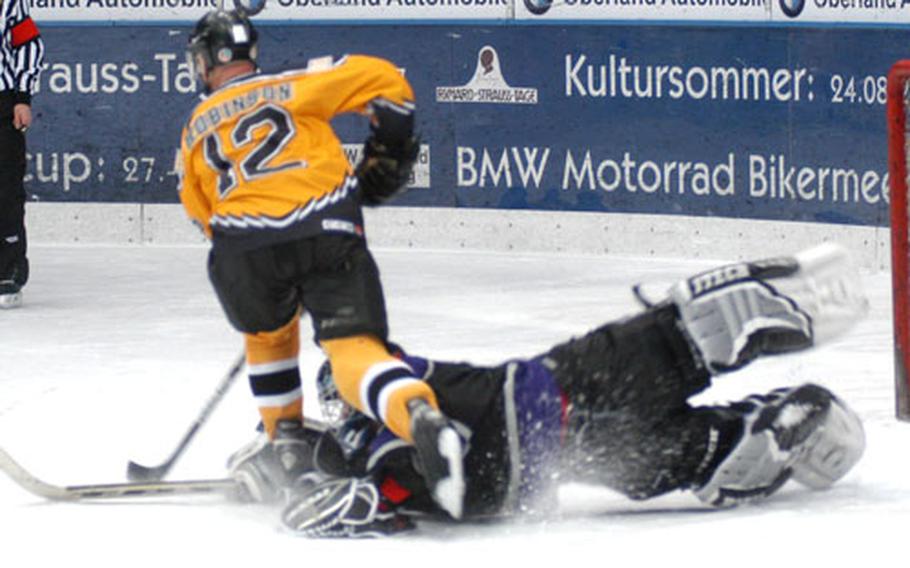 The Bitburg Bears pose with the championship trophy after defeating the Baden Bruins 4-2 on Friday at the 14th Annual USAFE Ice Hockey Championships in Garmisch, Germany. (Charlie Coon / S&S)

GARMISCH-PARTENKIRCHEN, Germany &#8212; The Bitburg Bears had clawed their way to a 2-0 lead after two periods. They&#8217;d stopped a penalty shot and controlled play for most of the game.

But the Baden Bruins, who last year finished last among eight teams in the tournament, didn&#8217;t give up. They came out strong in the third period, scored two goals to tie the game and had visions of going from worst to first.

Bitburg regained its poise down the stretch, cranked in a couple more goals and beat Baden 4-2 on Thursday to hoist the first-place trophy in the 2006 U.S. Air Force in Europe Ice Hockey Championship.

Gianpierre Salazar scored what proved to be the game-winner on a one-timer from the slot. Baden&#8217;s backup goalie, Mark Rosengard, who replaced the injured starter halfway through the second period, kept the Bruins within 3-2 with a series of pad saves during a Bitburg onslaught midway through the third period.

Terry Courtney helped ice the championship for Bitburg when he scored his second goal of the game for a 4-2 lead with five minutes to play.

Tom Poeschel, the Bitburg captain, said his players performed the basics well: getting into proper position, winning the loose pucks, and checking opponents instead of allowing them to get rolling on the attack.

Salazar&#8217;s game-winner came after the two Baden defenders went to check Mark DeGironimo as he carried the puck through the left circle. That left Salazar open, and he took DeGironimo&#8217;s pass in front of the goal.

Players in the 14th annual tournament were ID card-holders from either Department of Defense or NATO.

In the third-place game, the Kaiserslautern Eagles held off a rally to beat the Aviano Ice Dragons 6-4.

Kaiserslautern took a 5-3 lead with five minutes remaining when John Hale scored on a wrist shot into the top-right corner of the goal. Aviano pulled its goalie to get another skater onto the ice, and the plan worked as Bill Bach scored from the slot to bring the Dragons within 5-4 with two minutes to play.

John Hilfer scored in the final minute to restore the two-goal lead.

&#8220;We played really well but were playing with a short bench,&#8221; said Aviano captain Paul Thornton, whose team had just 10 skaters and one goalie. &#8220;We just wanted to be competitive and see what happened.