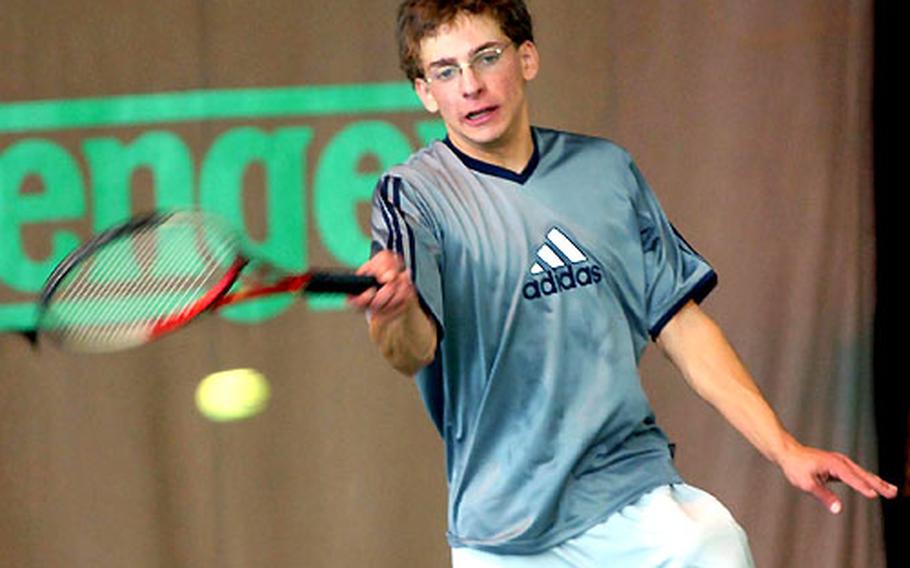 Bitburg senior Jordan Matthews, above, is undefeated this season and has victories over top European championship contenders Jun Koide of ISB and Devin Hayes of Hanau. (Raymond T. Conway / S&S)

There are several reasons why Bitburg senior Jordan Matthews is seeded No. 1 in the European tennis championships which begin Friday in Wiesbaden, Germany.

Equally apparent is Jordan&#8217;s record against the best of the competition he&#8217;ll face in the Europeans. He&#8217;s unbeaten, with victories over No. 2-seeded Jun Koide of International School of Brussels, and Hanau&#8217;s Devin Hayes, just to name two.

Less obvious is Matthews&#8217; inner strength and confidence, said Vadney, who has coached Matthews since he was a seventh-grader.

Matthews&#8217; prowess on the court wasn&#8217;t exactly evident when he showed up on the Bitburg courts five seasons ago, Vadney said.

He&#8217;s continued to do so, finishing fifth in Europe as a junior before earning this year&#8217;s top seed.

While the link between those two activities and tennis may be hard to see, Vadney thinks tumbling routines may carry over to the courts.

Despite the top seed and his athletic ability, Matthews says there&#8217;s room for improvement.

This weekend, Matthews will have just one man to coach through the pressure of being the top seed here.