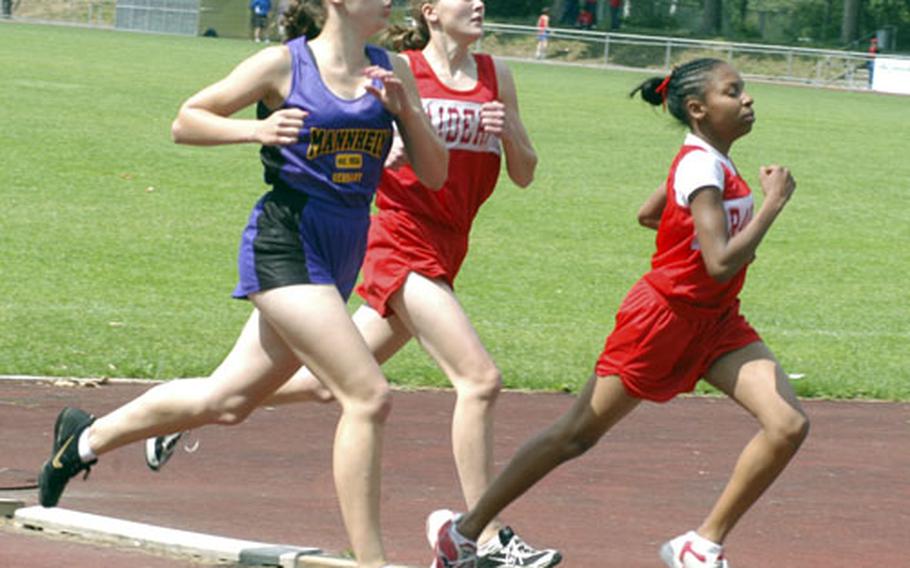 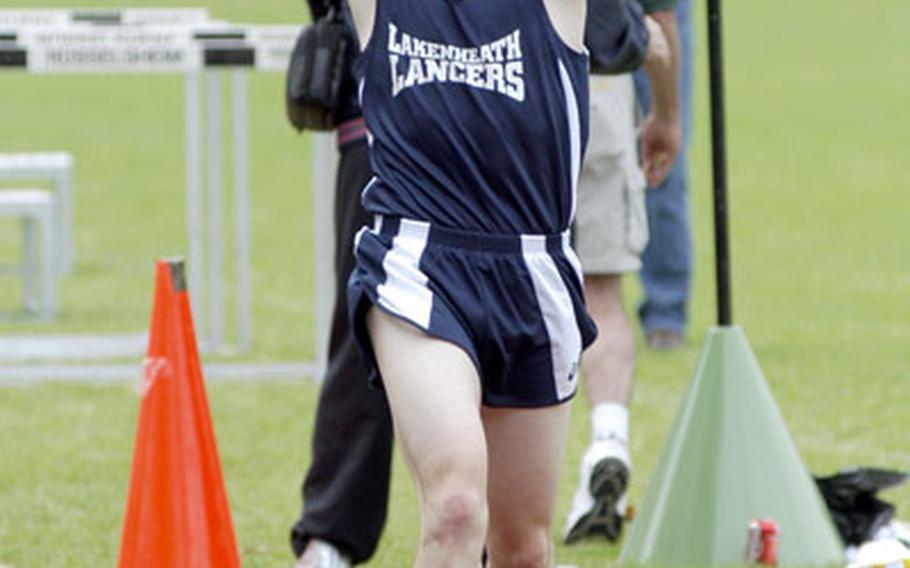 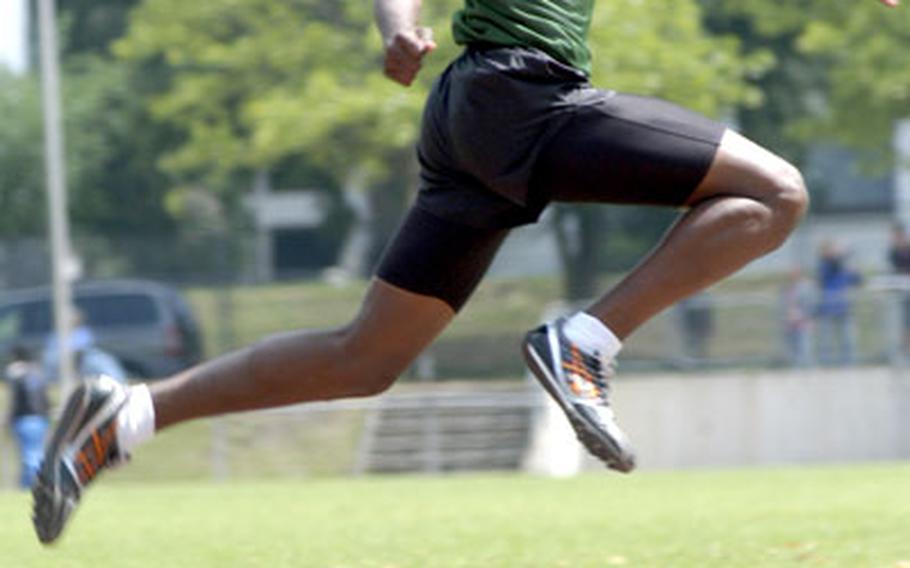 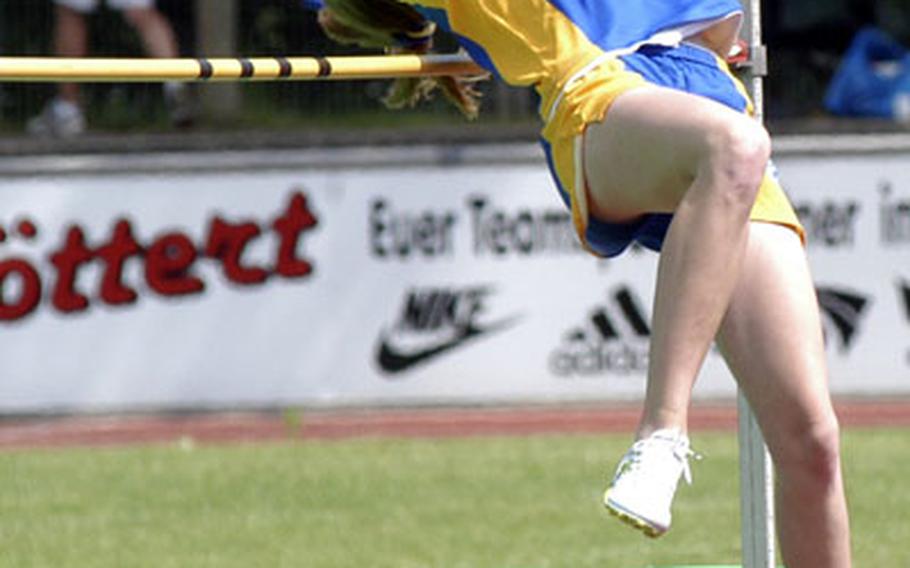 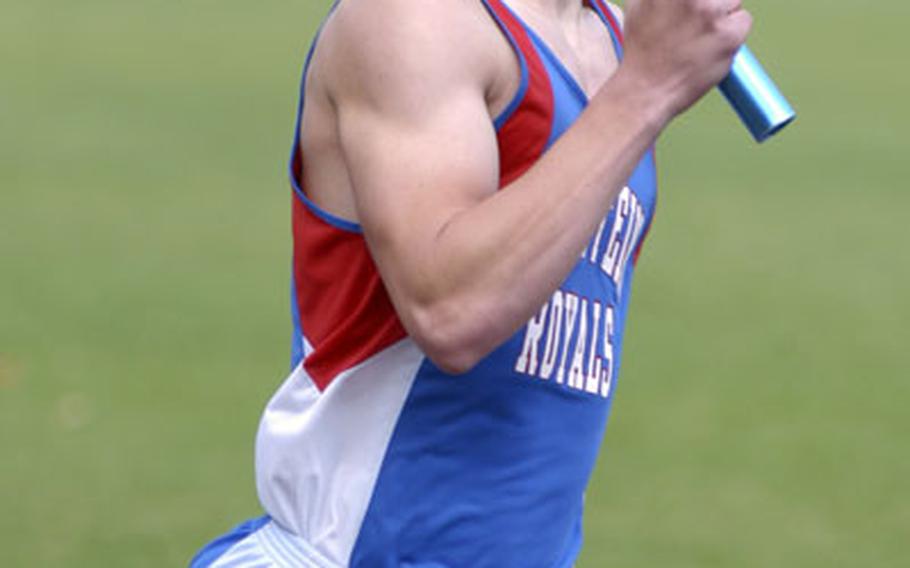 &#8220;I was shooting for the record all year long,&#8221; Bilington said after the race. He had a shot at breaking it last week, but a fierce headwind kept him off record pace.

Weather wasn&#8217;t a factor in the DODDS-Europe track and field championships Friday, the first day of the two-day event.

The meet was Billington&#8217;s last shot at breaking the 3,000-meter record, a fact that wasn&#8217;t lost on the Lakenheath senior. That helped motivate him to run even faster than he had last week.

He nearly lapped the last-place runner as he wheeled into the finish with a final lap of 1 minute, 4 seconds.

Billington made the feat look easy, breezing through the laps as if he was running the 1,500, in which he also is the top seed, instead of the 3,000. It didn&#8217;t feel that way on the track, though.

Billington&#8217;s victory was the biggest happening on the first day of the meet, but Kaiserslautern&#8217;s Colleen Smith delivered a performance in the girls 1,500 meters that was nearly as dominant.

With a seed time almost 16 seconds faster than her closest competition, it seemed as though the 15-year-old sophomore had little to worry about as she approached the starting line. That wasn&#8217;t the case.

&#8220;I was nervous,&#8221; she said after the race, breathing easily at trackside as she watched the rest of the field finish.

She wasn&#8217;t flushed or sweating, but said she did feel tired when she crossed the finish line.

Later in the day, Marche Bobbs, a 14-year-old freshman teammate of Smith, took it to Smith and all her older competition in the girls 800 meters, winning in a personal-best 2:25.87.

She&#8217;d beaten her teammate just once all season, but said her coaches put pressure on her to win because they believed she could, even if she didn&#8217;t think she had the speed.

So where is her self-doubt now?

Smith was second and Mannheim&#8217;s Susan Grunt third in the close finish.

n Rodgers dominated the girls shot put with a throw of 40 feet, 7&#189; inches, almost 5 feet farther than her closest competition.

n Ramstein won the 4x800 meter relay in 8:21.67. Senior Kyle Southard made up a nearly 25-meter deficit on the final leg to pull ahead of second-place Mannheim by more than 5 seconds.