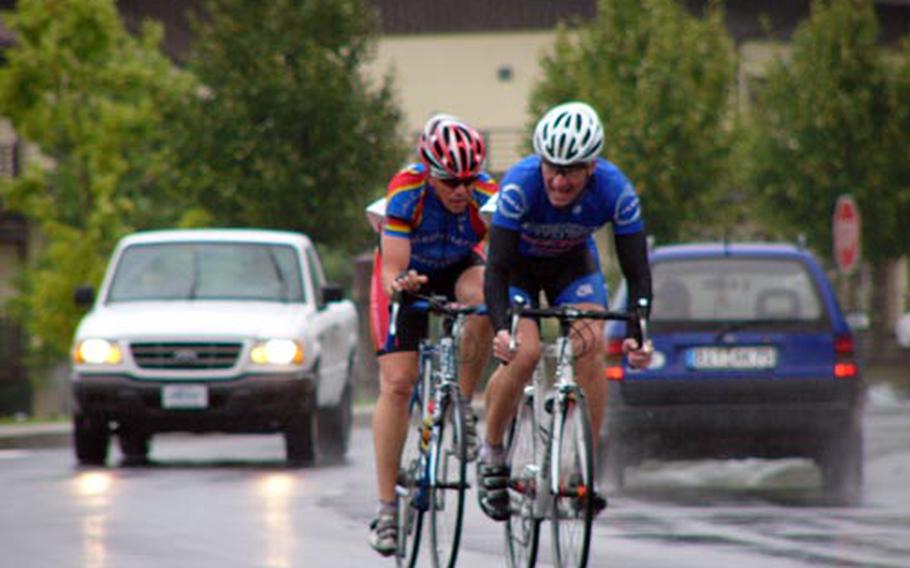 Martin Heinz of Spangdahlem (right) fends off a challenge from James Sharp of Kaiserslautern during Sunday’s 51.5-kilometer road race in Spangdahlem, Germany. Heinz was fastest overall in 1 hour, 21 minutes, 11 seconds in this final event of the 2008 U.S. Forces Road Cycling Series. Sharp was second in 1:21:25. (Rusty Ryan / S&S)

Martin Heinz of Spangdahlem (right) fends off a challenge from James Sharp of Kaiserslautern during Sunday’s 51.5-kilometer road race in Spangdahlem, Germany. Heinz was fastest overall in 1 hour, 21 minutes, 11 seconds in this final event of the 2008 U.S. Forces Road Cycling Series. Sharp was second in 1:21:25. (Rusty Ryan / S&S) 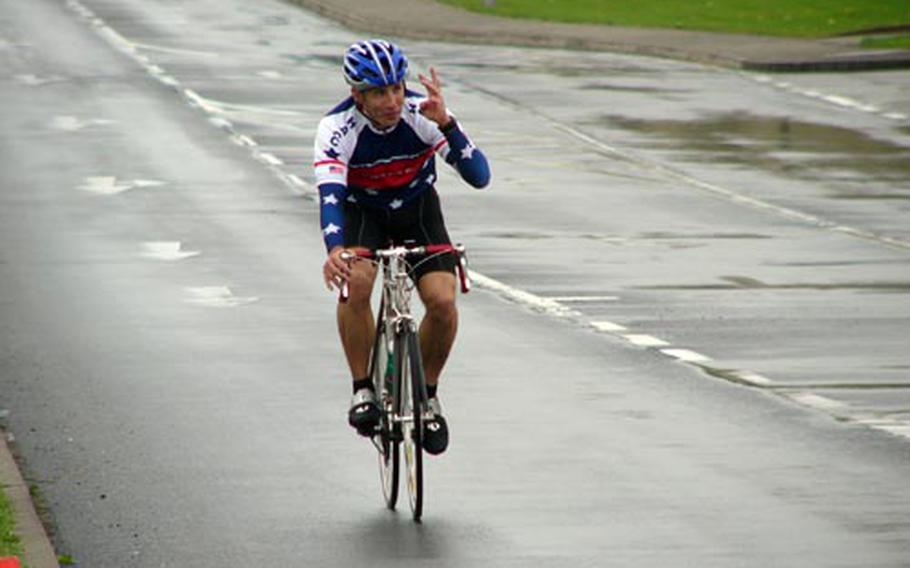 First, there was the weather.

Whereas July&#8217;s road race was conducted in near-ideal conditions, Sunday&#8217;s run, the final one in the 2008 series, was beseiged by wind and chilly rain.

Sharp, who rides in the open class despite his 46 years, also prevailed in the rain in Saturday&#8217;s time trial and points race at the Schoop outdoor velodrome outside of Kaiserslautern to wrap up the season title in the series with 56 points. That was a whopping 24 ahead of runner-up Christopher Myers, of Grafenw&#246;hr, who finished third Sunday in 1:46:46.

"This time," said Heinz, who wrapped up the series masters title with his weekend performance, "we decided not to watch each other like we did last time. We decided to go out strong, and if you get caught, you get caught."

The abandonment of tactics was the second major change from July, and unlike the weather, it met fully with Heinz&#8217;s approval.

It got even more sportsmanlike at the end.

Sharp said his decision about a final sprint made little difference in the outcome. "Martin was awesome today," he said. "He was too strong. I wouldn&#8217;t have beaten him even if I had sprinted."

Like Sharp, Richard had won this series in 2006 and spent 2007 deployed. Richard&#8217;s series trophy helped warm an afternoon that began uncomfortably.

"I was shaking at the (starting) line," he said. "We were just trying to get out fast to get warm."

Sunday&#8217;s women&#8217;s winner was another Spangdahlem rider, Jessianna Osbourne, a triathlete who clocked 1:05:32 for the three-lap, 30.9-kilometer course. By not competing Saturday, she lost the weekend title to Emily Burkart of Stuttgart. The overall women&#8217;s series champ, Theresa Michal of Stuttgart, did not compete.

"It&#8217;s hard sometimes to get to all the events," said Richard, who added that the effort is worth it, even in wind and rain.