BFA to get ready for finals by facing bigger foes 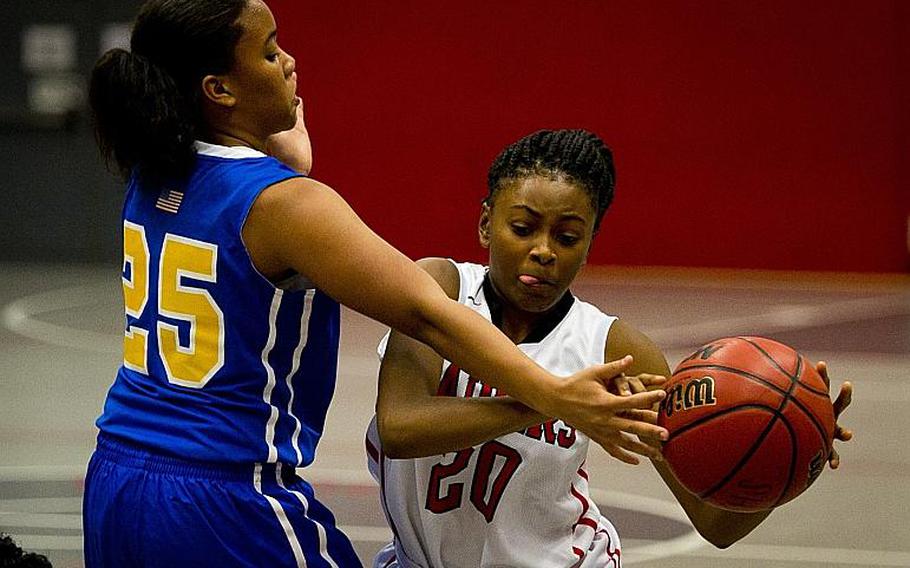 Kaiserslautern's Mikala Bell tries to pass the ball past Wiesbaden's Savannah Benson-China during a game at Vogelweh, Germany, on Friday, Jan. 20, 2017. Kaiserslautern won 31-20. (Michael B. Keller/Stars and Stripes)

Rather than looking for a soft landing to the DODEA-Europe basketball regular season, the Black Forest Academy Falcons don’t plan to land at all. They’re happy to just keep soaring.

BFA, the defending Division II European girls champion and returning Division II European boys runner-up, faces a formidable schedule of solid Division I opponents over the final two weeks of the regular season. The Falcons visit the Kaiserslautern Raiders on Friday and Saturday, then host the Vilseck Falcons on Feb. 17-18 before starting their title pursuits Feb. 22.

The Falcons find this rigorous schedule not just acceptable, but preferable.

“Challenges bring teams together,” Greathouse said. “Playing tough competition is what sports are all about.”

Girls coach Cindy Kennedy said her enthusiasm for the coming stretch was tempered a bit by injuries to key players in the Falcons’ recent pair of blowout wins over archrival and 2016 title-game opponent Bitburg. Still, she’s looking forward to seeing her team tested over the next two weekends.

“You can only get better if you’re challenged,” Kennedy said.

The Falcons’ looming opponents should deliver in that department.

On the boys side, both Kaiserslautern and Vilseck are fighting to improve their stock in a crowded Division I bracket, as evidenced by the teams’ spirited doubleheader split last weekend.

Kaiserslautern owns just one divisional win but hinted at its potential in a one-point loss to first-place Wiesbaden last month; Vilseck showed what it’s capable of in an early-season win over defending Division I champion Ramstein.

The Raider girls, meanwhile, are a sterling 6-1 in divisional play as they prepare for their own imposing stretch run featuring BFA, defending champion Ramstein and undefeated Stuttgart. Vilseck too has had its moments this winter, notably in wins over divisional rivals Wiesbaden and Vicenza.