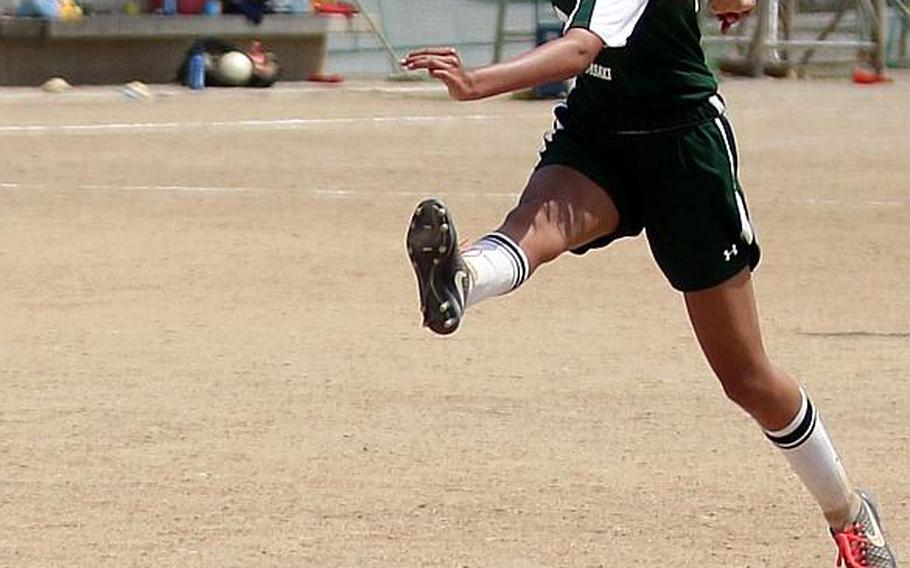 Her Kubasaki girls soccer team won three district and Far East Division I Tournament titles on her watch. But Alexis Townsend, a junior midfielder, didn’t lead the team in goals and only topped the assists ledger once in her three seasons with the team.

It was other things she brought to the table, teammates and coach said – a fierce competitive spirit, fighting through adversity and injury and pushing the team to be the best it could be, never mind the circumstances.

“She would keep on fighting, no matter what,” senior midfielder Kennady White said. “Nothing could stop her.”

“Every day in practice, she would push the team to be the best we could be, to perform our best at upcoming games,” senior forward Talea Wilcox said. “She would find ways to make us hit the level we needed to achieve, so we could win.”

Her third and final season saw Kubasaki go 16-2-2, including a 2-0-1 record against arch-rival Kadena, and a second successive 4-0 D-I finals win over Nile C. Kinnick. Townsend also won her second D-I Most Valuable Player award, something she also did in 2014.

For her achievements, Townsend has been named Stars and Stripes’ Pacific high school girls soccer Athlete of the Year.

Despite the winning mark, Townsend said the title was anything but easy to achieve. “We had a lot of things we needed to work on” at season’s beginning, she said. Kubasaki in many respects was rebuilding, and coach Saleem Malik was trying different players in different spots.

That included Townsend, who played some defense, mostly midfield and some forward, and never once voiced disagreement, Malik said.

“She was a selfless player; she could do it all,” Malik said, adding that she would solidify the defense as well as she could control the middle and be just as apt to score as distribute the ball up front.

Townsend was emblematic, Malik said, of a team that from the jump got along well, even when things weren’t going so good, such as the Dragons’ 2-1 loss in the last match of the American School In Japan soccer festival in late April.

“The girls gelled together, they had a good group dynamic,” Malik said. “It wasn’t just about the hard work that they put in, but they were not selfish.”

“I tried to be a hard worker, to push myself along with my teammates to be the best they could be,” Townsend said.

Townsend transferred from Okinawa last Saturday and will attend high school in Rochester, N.Y., for her senior year.