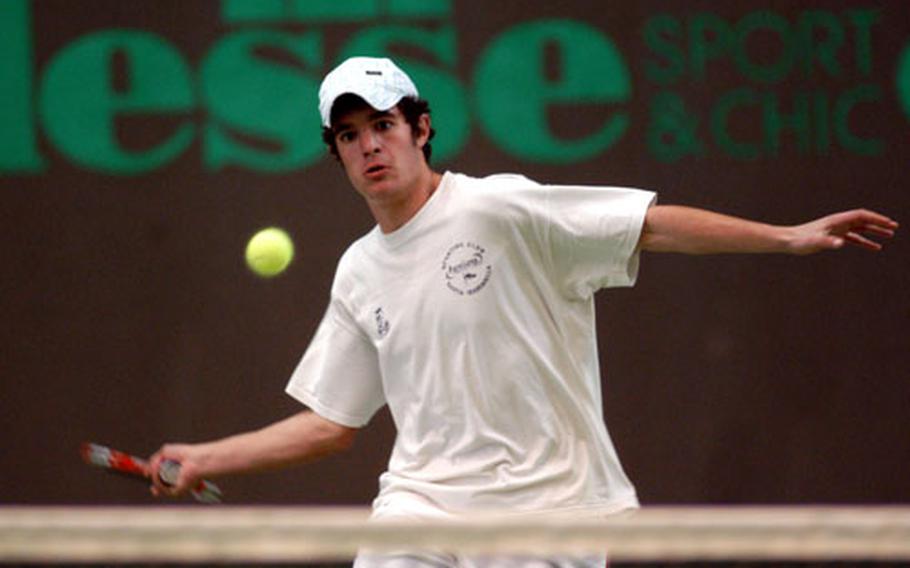 SHAPE’s Claudio Giraldi has his eyes on a shot from Heidelberg’s Mike Sanchez in the DODDS-Europe boys tennis title match in Wiesbaden on Saturday. Giraldi, the top seed, beat No.2 Sanchez 6-2, 6-3. (Michael Abrams / S&S)

SHAPE’s Claudio Giraldi has his eyes on a shot from Heidelberg’s Mike Sanchez in the DODDS-Europe boys tennis title match in Wiesbaden on Saturday. Giraldi, the top seed, beat No.2 Sanchez 6-2, 6-3. (Michael Abrams / S&S) 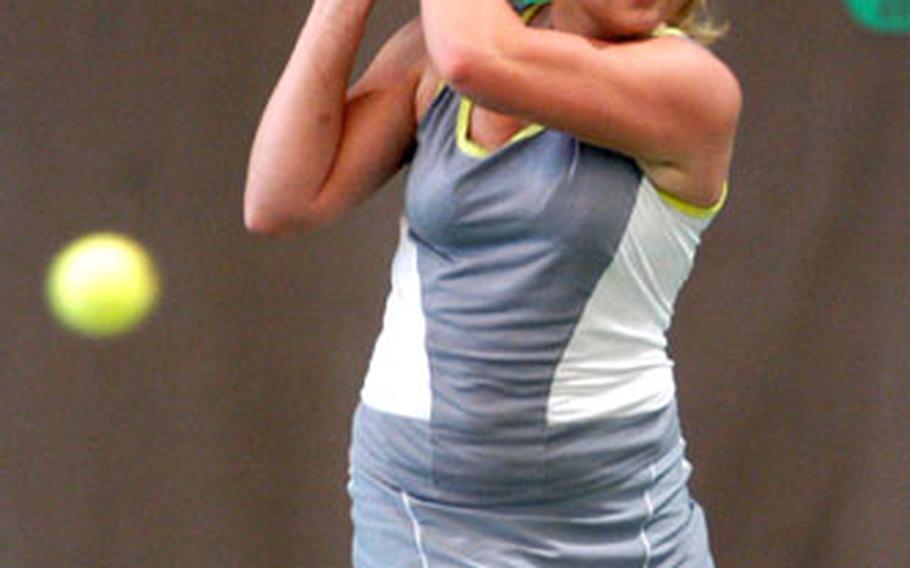 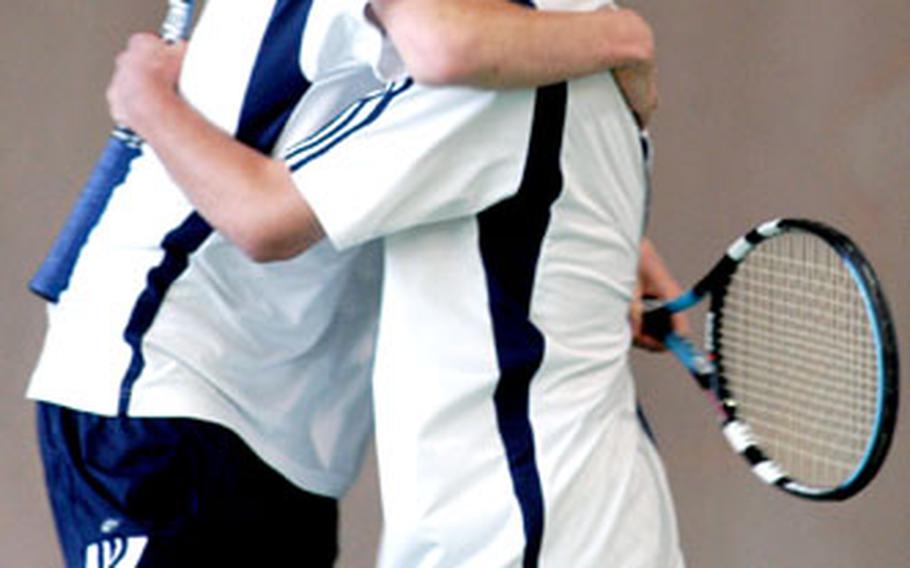 WIESBADEN-NORDENSTADT, Germany &#8212; Tennis and Belgium seem seem synonymous these days, from the professional duo of Justine Henin-Hardenne and Kim Clijsters to this year&#8217;s DODDS-Europe tennis champs.

Players from two Belgian-based high schools claimed three of the four titles on the final day of the European tennis championships. The other title &#8212; boys doubles &#8212; went to Heidelberg.

Giraldi and Citkovska are sophomores at SHAPE High School in Mons, Belgium.

The girls doubles title went to Yuna Shibata and Izumi Takeuchi of the International School of Brussels. The two defeated Maggie Curry and Megan Jones of Ramstein, 6-2, 7-6 (7-1).

Citkovska&#8217;s match was tight from first serve until final shot. Saxena actually led the second set 3-0 before losing six of the next seven games.

After Saxena&#8217;s last shot hit the net, Citkovska leaped joyfully into the air and then cried with relief.

Citkovska was pleased with her serve and forehand, but called her backhand &#8220;horrible,&#8221; something Giraldi wants to work on as well.

Based on Saturday&#8217;s match, the Italian teen doesn&#8217;t seem to have much else to work on. His serve repeatedly came in hard and fast, forcing Sanchez to be extra diligent on the carpeted surface.

Midway through the second set, Sanchez seemed to regain the attentiveness he may have lost. He won three of the last five games, but by then Giraldi&#8217;s 4-0 start was too much to overcome.

Still, Sanchez has much to be proud about, especially considering he took up the game in his early teens. Two years ago, he finished fourth, and last year took third in the Europeans.

The winning shot came in front of the net as Giraldi reached high to smash a shot well out of Sanchez&#8217;s reach.

Giraldi roared at the sight of it. In fact, Giraldi roared quite a bit, often in Italian. He said later such outbursts help spur him on and that none of it was directed at Sanchez.

The longest and most entertaining match took place at the end of the day, when everybody else was finished and waiting for Heidelberg&#8217;s Blair Martin and Sam Pohl to conclude their match with Phil Burroughs and John Keenan of Lakenheath.

The three-set match also featured a fair amount of yelling, with members of both teams screaming at themselves in an effort to improve their play.

Pohl had the crowd in stitches when he loudly admonished himself for getting between Martin and the net. The result: the ball ricocheted off Pohl&#8217;s head and out of bounds. Point Lakenheath.