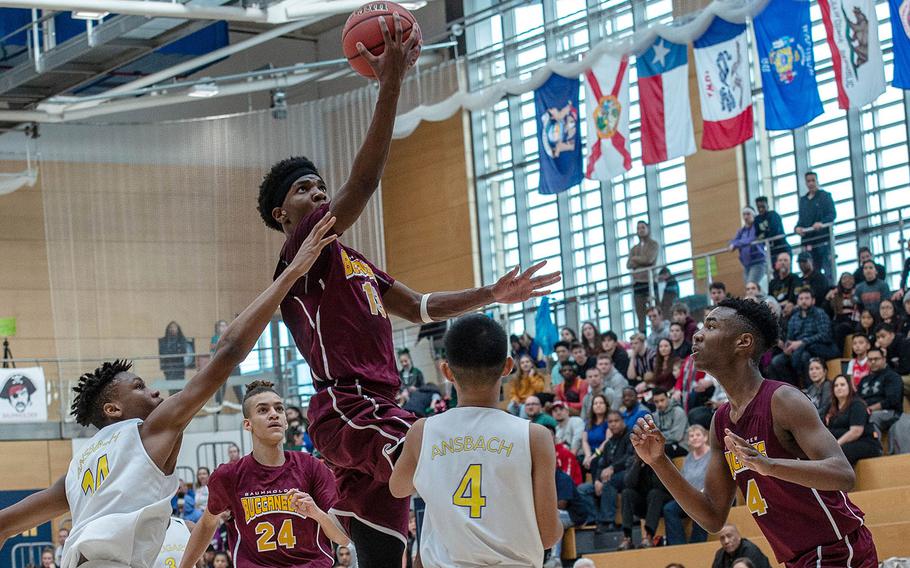 At the team level, the Ramstein Royals will look to stretch their Division I dynasty to an unprecedented six seasons.

And at the individual level, this season may well hold another leap for Baumholder junior Chandler Pigge’, a gifted 6-foot-4 phenom who won the Stars and Stripes boys basketball Athlete of the Year award and led the Bucs to a Division III title last year and has a chance to be among the best players ever produced by a DODEA-Europe hoops program.

Division I Ramstein’s fifth straight championship last winter felt like the end of an era with the graduation of program centerpieces Naser Eaves and Gabe Fraley. But it’s just as likely that the Royals produce more of the same this season.

Three seniors, each key contributors to previous Royal titles, now hold the keys to the DI dynasty. Point guard Jerod Little, sharpshooter Luis Figeroua and 6-foot-3 forward Jason Jones Jr. give Ramstein top-flight talent on the ball, on the wing and in the paint.

The Royals will tangle with foes both fresh and familiar as they look to prolong their reign.

German neighbors Kaiserslautern, Stuttgart, Vilseck and Wiesbaden will offer renewed resistance. Kaiserslautern has been on the wrong end of Ramstein’s dynasty for years, including the last two European championship games, and remains eager to reverse that trend. Stuttgart has a huge frontcourt with which to overpower opponents. Vilseck enjoys unusual continuity with four of five starters returning. Wiesbaden will be led by a talented senior backcourt.

Northern contenders Lakenheath and SHAPE, meanwhile, will see where they stand immediately as they each pay an opening-weekend visit to Ramstein.

The two Italian schools are back in the Division II bracket this year after five years at the Division I level, a consequence of DODEA-Europe’s move to bring more geographic order to the divisional structure. Rather than regularly sending teams back and forth across the Alps for regular-season divisional games, the move returns Naples and Vicenza to the ranks of Italian peers such as Aviano, American Overseas School of Rome, Florence and Marymount.

While Naples and Vicenza look to reassert themselves atop the division’s hierarchy, stalwart Aviano won’t give ground easily. The Saints return all five of their starters to a senior-driven squad built to make an impact in the tournament.

But its Division II’s most distant school seeking to make the most noise this winter. Bahrain has been a rising divisional power for years and gave Black Forest a worthy challenge in last year’s Division II title game. The Falcons join Spain-based Rota as interlopers in a revamped division that is now 75 percent Italian.

Division III DODEA-Europe hasn’t seen a player with the all-around ability of Baumholder’s Pigge’ in many years.

A 6-foot-4 point guard, Pigge’ is both the most physically imposing player on any given DODEA-Europe court and the most skilled, scoring at will from anywhere on the court, whipping precision passes to open teammates and making winning plays on defense and on the boards. He blossomed into a star as a sophomore, growing into the clear best player in the league and leading the Bucs to a long-awaited European title with a masterful championship-game performance.

Pigge’s presence makes Baumholder the runaway favorite to repeat, but the Bucs’ case is helped by the return of three other starters from last year’s championship group. They’ll again be challenged by a new-look group from returning runner-up Ansbach, a promising Spangdahlem squad deploying a modern pace-and-space system and a seasoned Brussels team led by star senior point guard Jalen Pollard.