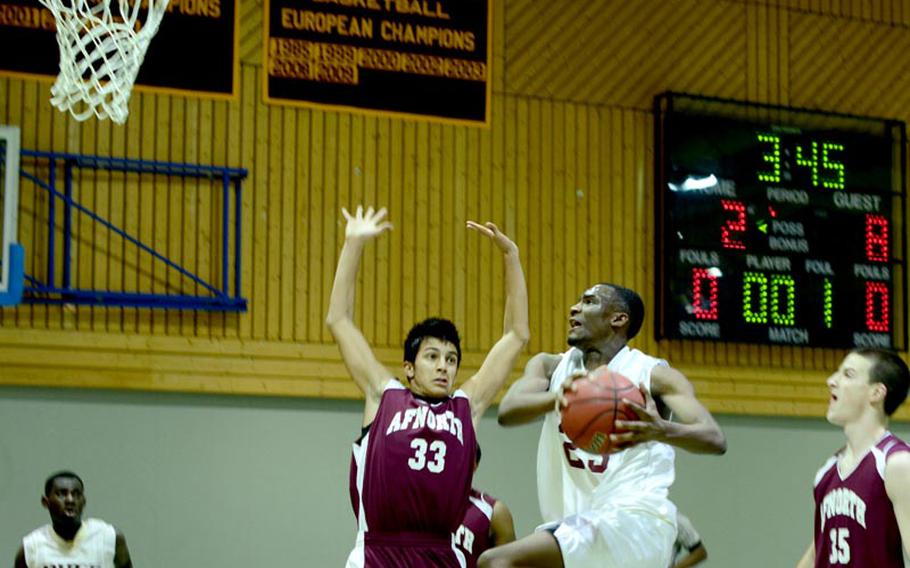 Baumholder's Dimio Harris glides past AFNORTH defenders to lay the ball in for two in Friday night's loss against AFNORTH. (Joshua L. DeMotts/Stars and Stripes) 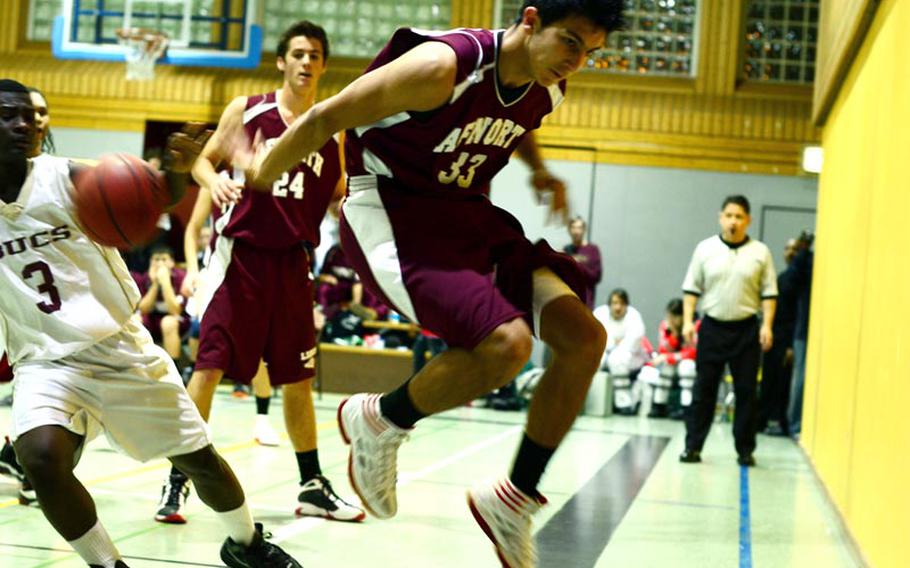 AFNORTH's Oguzhon Yabici flies out of bounds while trying to save the ball during Friday's victory over Baumholder. (Joshua L. DeMotts/Stars and Stripes) 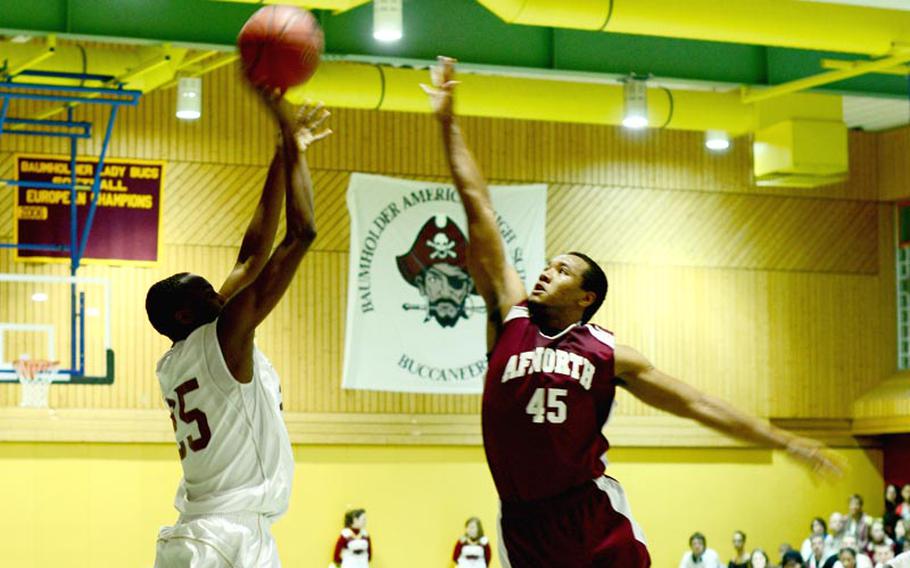 BAUMHOLDER, Germany &ndash; Tahrell Harris canned three straight 3-pointers in the first quarter Saturday to jump-start the Baumholder Bucs to a 60-56 victory over the AFNORTH Lions and a split of a non-regional Friday and Saturday matchups.

Harris, who finished with a game-high 20 points and seven steals, scored 17 of his total points in the first half, according to Baumholder coach Spencer Bean, to help the winners to 36-15 halftime edge.

AFNORTH, which won Friday&rsquo;s game 62-46 behind Turkish scoring ace Nuri Karaca&rsquo;s 20 points, was playing without Karaca on Saturday. But the Lions refused to quit, getting the game close on a 24-9 fourth-quarter run.

&ldquo;The whole fourth quarter, it felt like we were trying not to lose,&rdquo; Bean reported in a Saturday email. Already in the double-bonus at the start of the final eight minutes, he added, AFNORTH &ldquo;put a lot of pressure on our guards and created a lot of fast-break opportunities to climb back into it.&rdquo;

J.D. Pollock, who finished with 17 points, scored nine of them in the final stanza, Bean wrote, doing &ldquo;a great job of splitting our defense and getting to the basket.&rdquo;

Brock Holman, who scored 17 points, canned a trey at the buzzer to make it a four-point defeat, Bean reported.

In other boys&rsquo; games of note:

Wiesbaden 62, Bamberg 53: Saturday at Wiesbaden, Roscoe Johnson scored 24 points and handed out five assists to lift the D-I Warriors over their D-III guests.

Kelsey Thomas added 22 points and four steals for Wiesbaden (2-2) in this non-regional game; Andrew Murray posted 12 points and eight rebounds for the winners.

SHAPE 54, Bitburg 48: Saturday at Mons, Belgium, the Spartans claimed their first victory of the season behind 15 points and 10 rebounds from Alizi Douglas.

The double-double was the second in as many days for Douglas, who registered 19 points and 11 rebounds in Friday&rsquo;s 58-52 loss to Bitburg.

Saturday, according to coach Tim England, SHAPE (1-5) seemed headed for its sixth straight defeat when the Spartans trailed 40-34 after a dismal six-point third period. But SHAPE went on a 20-8 fourth-quarter run to put the game away.

Bitburg (1-3) collected its first victory of the season on Friday behind 13 points from C.J. Evans and 11 points and five rebounds from Rashawn Wimberly.