Battle brothers find return to Germany ‘like a homecoming’ 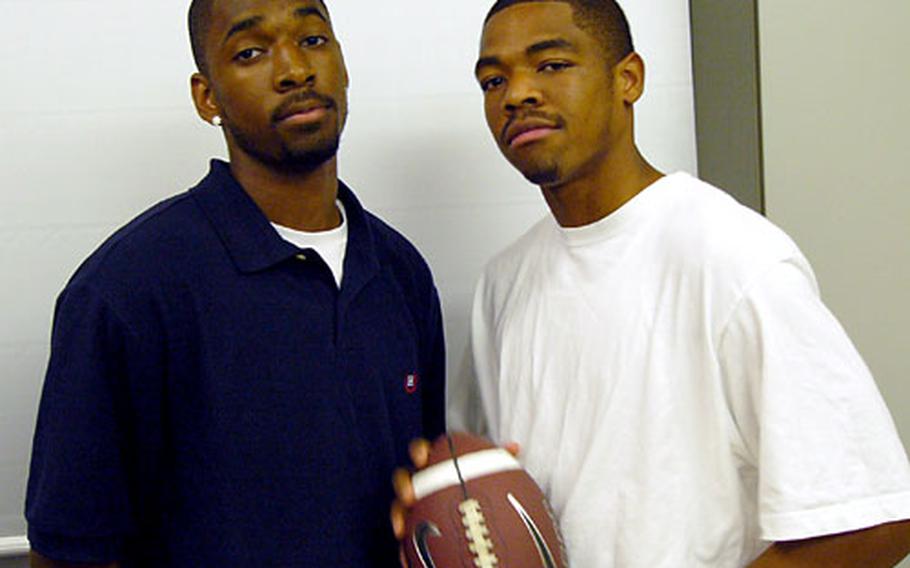 Tim Battle, left, a senior quarterback, and his brother C.J., a junior running back, left Giessen High School last November to attend Mount Vernon High School in Alexandria, Va., but returned to live with their mother and partake in the camaraderie that comes with playing football at a smaller school. (Rusty Bryan / S&S)

GIESSEN, Germany &#8212; For three-sport-stars Tim and C.J. Battle of Giessen High, returning to a DODDS-Europe Division III school from a stateside institution 10 times as large has a special feel to it.

The two transferred from Bamberg to 1,700-student Mount Vernon High School in Alexandria, Va., last November. They returned to Giessen, however, because the heart triumphed over the head.

Both acknowledged they went to the States to attract the attention of college recruiters, but with their mother still in Germany, the Battle Brothers decided to return to Europe for one final season.

It wasn&#8217;t the heat of competition but the warmth of home that brought them back, they said.

Even so, both said they enjoyed testing themselves against the deeper talent pool they faced in winter and spring sports at Mount Vernon.

Back in Europe, the stuff they&#8217;ve showed in three games looks like this:

The interest doesn&#8217;t surprise Giessen offensive coordinator Erik Majorwitz, who thinks both brothers can succeed in football or basketball or both in college.

For his part, Giessen coach James Lloyd, who said he couldn&#8217;t believe his good fortune when he heard last spring that the brothers were returning, likes the way the Battles have made themselves at home this season.

Wherever they wind up.