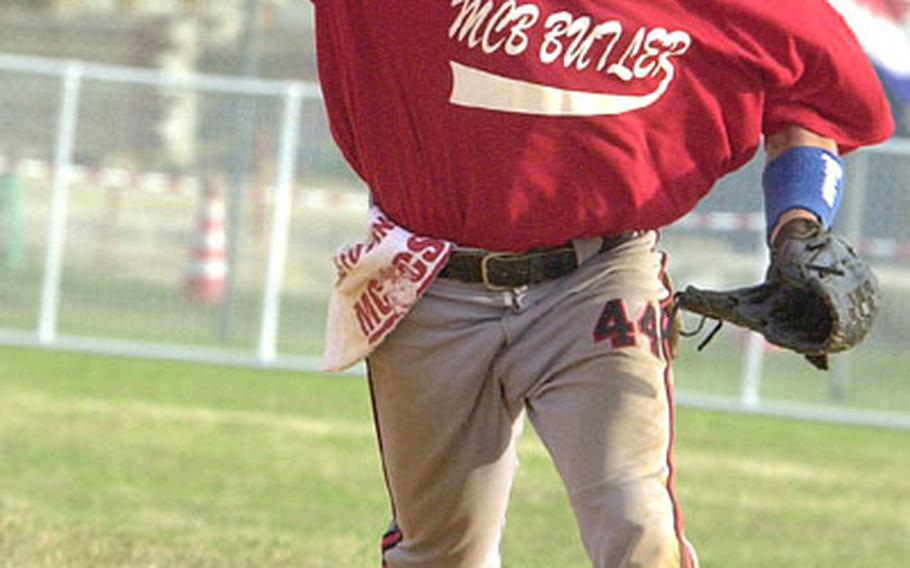 En route to its second championship in four years in the Marine Forces Pacific Regional Softball Tournament, Base seemed to do its finest work with one out remaining in three crucial innings Wednesday.

In a two-game final, Base netted 16 runs in the third inning of the first game, a 22-13 triumph. Then it scored five of its seven third-inning runs with two out in an 18-10 victory over 1st Marine Aircraft Wing.

Base, which also won the tournament in 2002, had entered the double-elimination playoff as the fourth and last seed. It was outscored 31-19 in round-robin play and opened the playoffs Tuesday by losing to 3rd Force 11-4. &#8220;Our bats were asleep,&#8221; Arbini said.

Still, Base trailed 3rd Force 7-2 with two out in the fifth Wednesday before a crucial throwing error by pitcher John Turner opened the floodgates. Base scored nine unanswered runs, five in the fifth to tie it and four in the sixth to go ahead for good.

That pitted Base against Wing, which entered the championship for the second straight year as the winner&#8217;s bracket representative, unbeaten to that point in the playoffs. Wing had beaten Base 14-2 in six innings in round-robin play.

The two teams know each other perhaps too well: Six of Wing&#8217;s players and four from Base are on Club Red, which plays on Okinawa&#8217;s open tournament circuit.

Wing led the first title game 5-3 before Base erupted. Aided by two Wing fielding errors, it sent 21 batters to the plate and scored 16 times in a 21-minute third inning.

Red Shaffer and Dick Cline each had two-run singles and Matt Lange a two-run double in the uprising.

From that point, Wing never recovered and Base never trailed. The knockout blow came in the third inning of the clinching game, when Amman, Arbini, Odell Kimbrough and tournament MVP Eli Roque strung together RBI singles as Base scored five of its seven runs in the inning, again with two out.

Roque, only 5 feet 3, sealed his MVP candidacy by batting 7-for-11 with three RBIs in the two championship games.

For Wing, Wednesday was another giant disappointment among several in the past five tournaments. In 2001, 2004 and this year, Wing was unbeaten through the early part of the playoffs only to get &#8220;double-dipped&#8221; in the championship round.

Wing didn&#8217;t come away from the tournament empty-handed. Two of its players were selected to attend the All-Marine tryout camp Aug. 14-Sept. 4 at Cherry Point Air Station, N.C.

Tyrone Gray, a former three-time All-Marine, was chosen for the camp along with teammate Keith Gilchrist, making his first trip.

They&#8217;re joined by Amman, Turner and Division&#8217;s Robert Putney. They&#8217;ll compete for berths on the 15-player All-Marine team, scheduled to play in the All-Armed Forces tournament Sept. 5-10 at Eglin Air Force Base, Fla. The Marines last won the title in 1999.