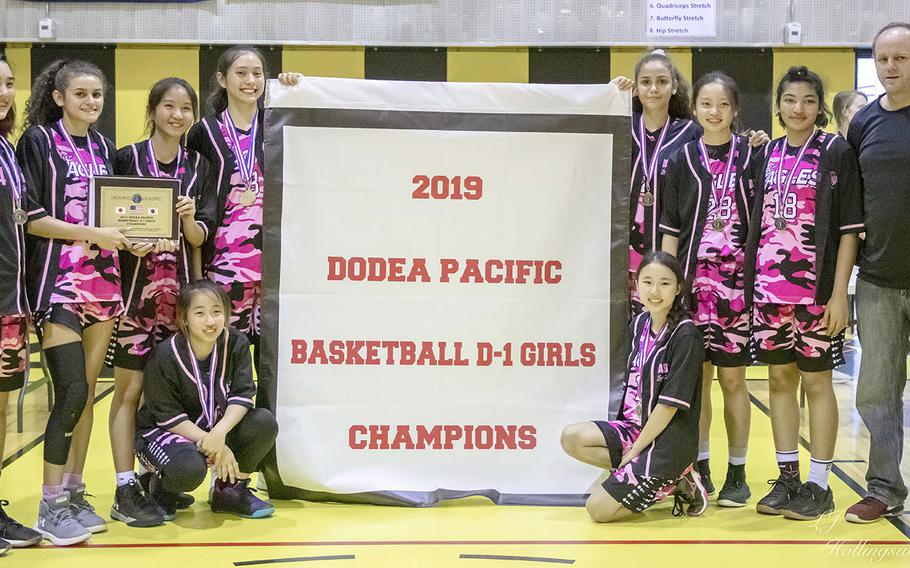 American School Bangkok's girls players and coach David Lucas gather round the banner. It's their third straight in the Far East Division I tournament. (L.J. Hollingsworth/Special to Stripes)

American School Bangkok's girls players and coach David Lucas gather round the banner. It's their third straight in the Far East Division I tournament. (L.J. Hollingsworth/Special to Stripes) Shanique Lucas was named MVP of the Far East Division I Tournament and her Bangkok team won it for the third straight year. (L.J. Hollingsworth/Special to Stripes) 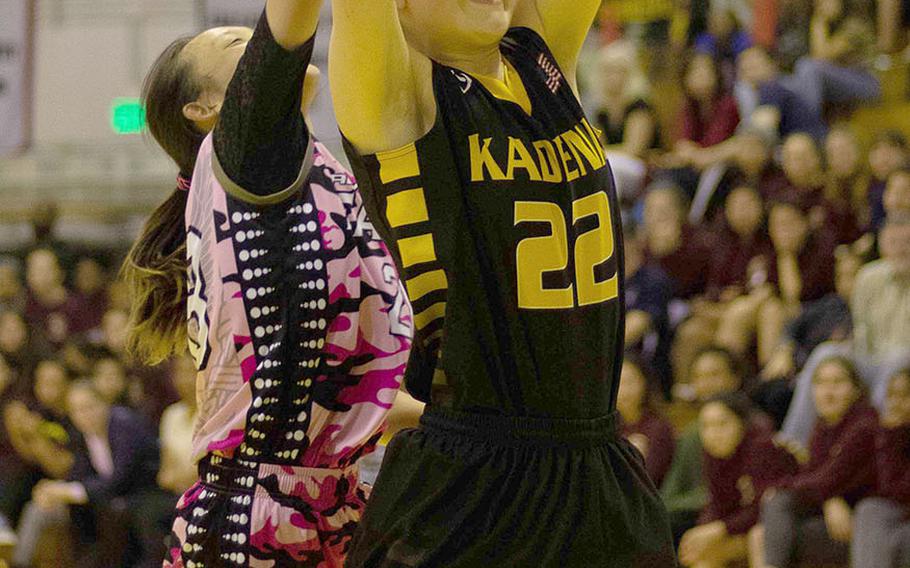 Kadena's Lydia Rice comes down with a rebound against Bangkok. (Mary Obsuna/Special to Stripes)

That was the narrative as American School of Bangkok’s Eagles made it three straight Far East Division I girls basketball tournament titles, with Shanique Lucas, a senior, being named Most Valuable Player for the third straight year.

And for the third straight year, the Eagles’ title came at the expense of Kadena, by a score of 60-39, and this time on the Panthers’ home court.

Lucas was one of four Eagles to score in double figures, along with sister Keisharna Lucas (13 points), Naina Sunchataqvirul (11) and Rua Rajanasoonthon, who led the Eagles with 15 points.

But it wasn’t easy for Bangkok, which struggled in the first two quarters before pulling away in the third period, outscoring Kadena 18-9.

“If we made more of our shots in the first half,” the Eagles might have pulled away sooner, said Eagles coach David Lucas, Shanique and Keisharna’s father. “We uncharacteristically missed shots and made unnecessary turnovers.”

But the Eagles righted the ship in the second quarter and outscored the Panthers 29-13 in the middle two periods.

Atirria Simms of Kadena led all scorers with 20 points.

Lucas said he was “a bit emotional” as it was the last time he’ll coach Shanique in a high school game. “Our last official game together,” he said of Shanique, who has committed to play for Union (Tenn.) next season.