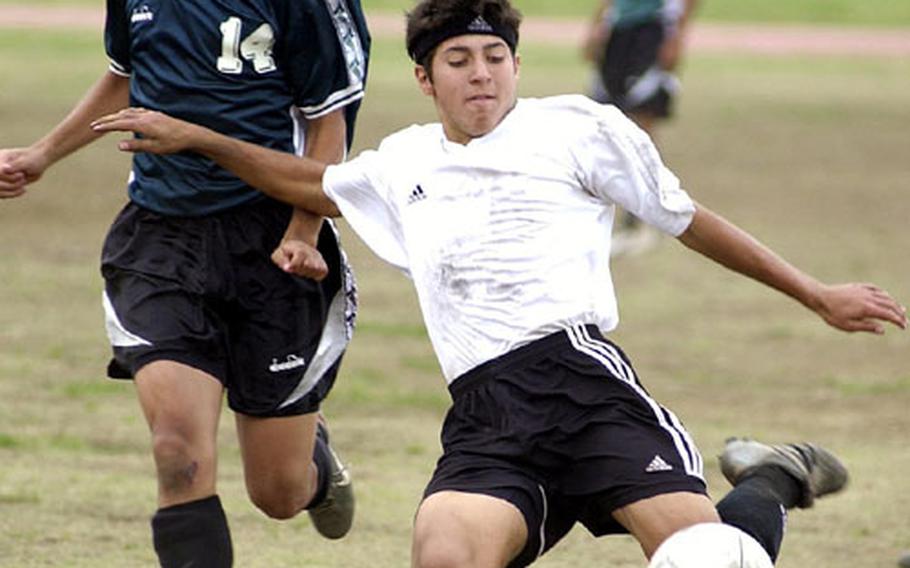 Senior Zach Zendejas scored and his sophomore brother Aaron set up a goal two minutes later midway through the second half to turn a 1-1 game into a 3-1 victory over Kubasaki in Friday&#8217;s championship match at Yokota&#8217;s Bonk Field.

&#8220;It feels very good to defend it,&#8221; said sophomore center-midfielder Nathan LaGrave, selected the tournament&#8217;s most valuable player. LaGrave was on the Kadena squad that beat Yokota 2-1 in last year&#8217;s Class AA final.

So, too, were the Zendejas brothers &#8212; one of three pairs of brothers on a team that went 17-0-1 this season and outscored opponents 73-10. Others among the &#8220;Band of Brothers&#8221; are junior Cole and sophomore Chris Maxey and junior Devon and sophomore Ian Copeland.

Zach Zendejas broke a 1-1 deadlock in the 72nd minute with his 13th goal of the season. He gathered a loose ball and fired a hard shot from the top of the box that soared high into the net over leaping keeper David Motu.

In the 74th minute, Aaron Zendejas&#8217; corner kick was headed into the left corner of the goal by LaGrave, giving the Panthers a two-goal lead.

Kadena answered seven minutes later off an indirect kick just outside the 18-yard box. Devon Copeland tapped it to Aaron Zendejas and he buzzed a shot past Motu, who made two brilliant saves early in the second half to keep it tied.

The second half was played mostly on Kubasaki&#8217;s side of the field.

While the Panthers will bid farewell to the Maxey brothers, who transfer to Ramstein Air Base in Germany this summer, Fitzpatrick will welcome back the Zendejases and Copelands, who each have an eighth-grade brother, Ben Zendejas and Austin Copeland.