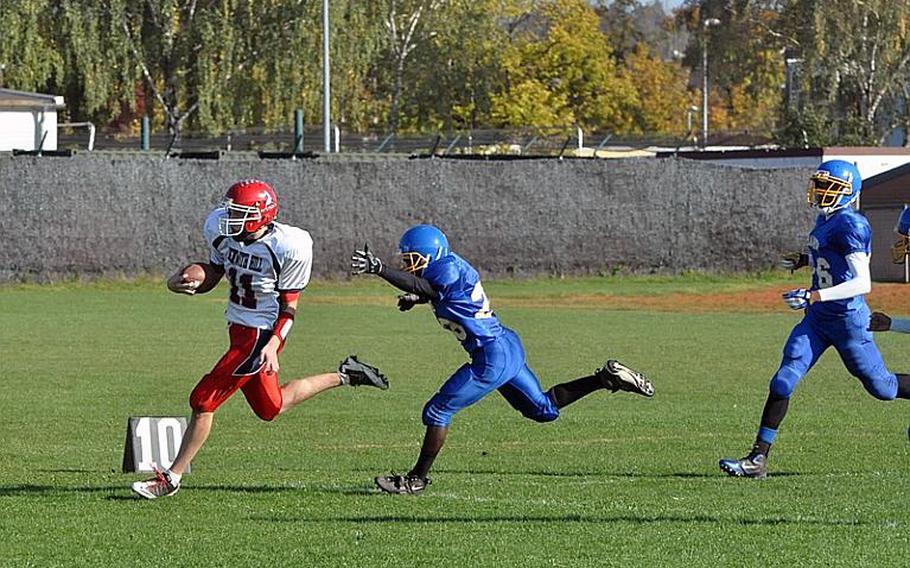 Menwith Hill junior quarterback Schuyler Backlar runs in a 51-yard touchdown to give the Mustangs a 20-0 lead over Bamberg in the second quarter of the Division-III semifinal in Bamberg on Saturday. Bamberg came back to win the game, 42-28. (Dan Blottenberger/Stars and Stripes)

Menwith Hill junior quarterback Schuyler Backlar runs in a 51-yard touchdown to give the Mustangs a 20-0 lead over Bamberg in the second quarter of the Division-III semifinal in Bamberg on Saturday. Bamberg came back to win the game, 42-28. (Dan Blottenberger/Stars and Stripes) 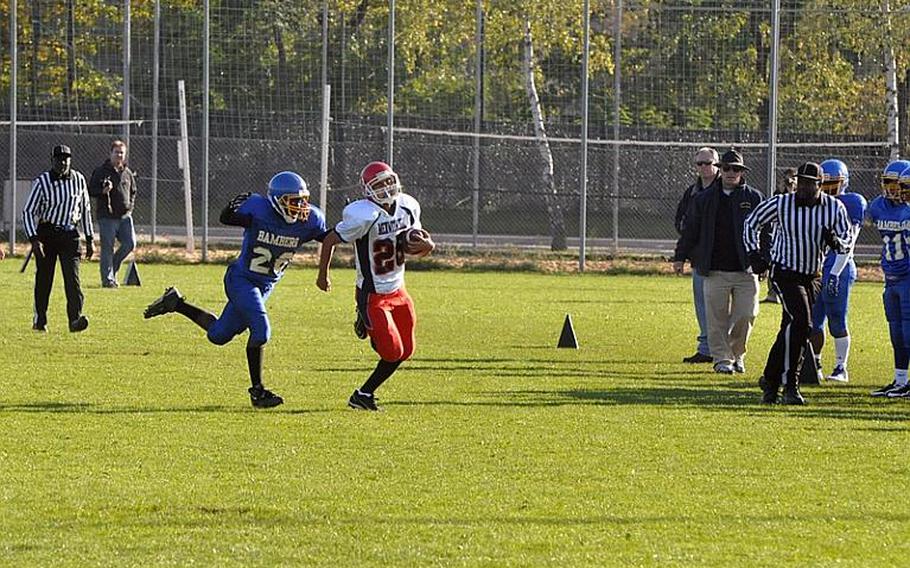 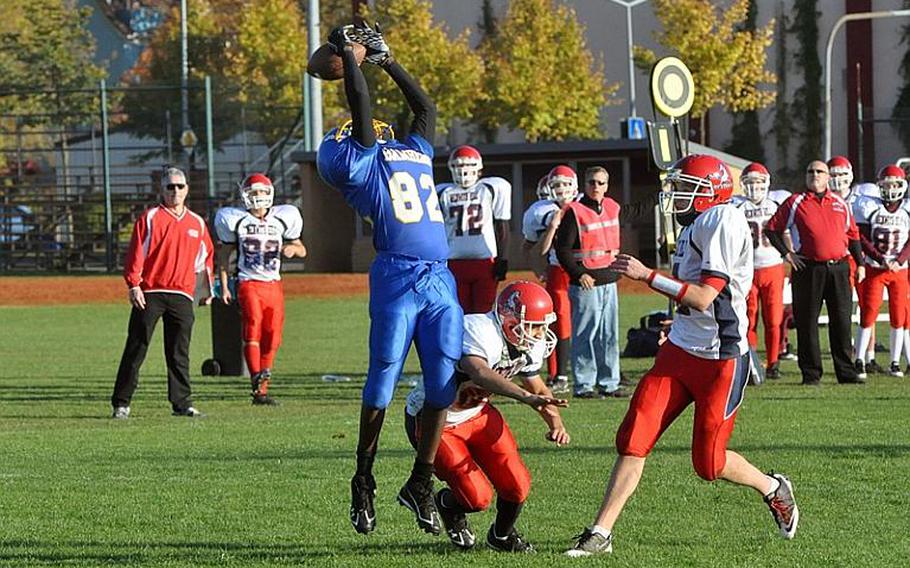 Bamberg junior Andray Garcia leaps up for a pass Saturday. Garcia would catch the pass and run it in for a 39-yard touchdown to give the Barons a 27-20 lead early in the second half. Bamberg won the game 42-28. (Dan Blottenberger/Stars and Stri) 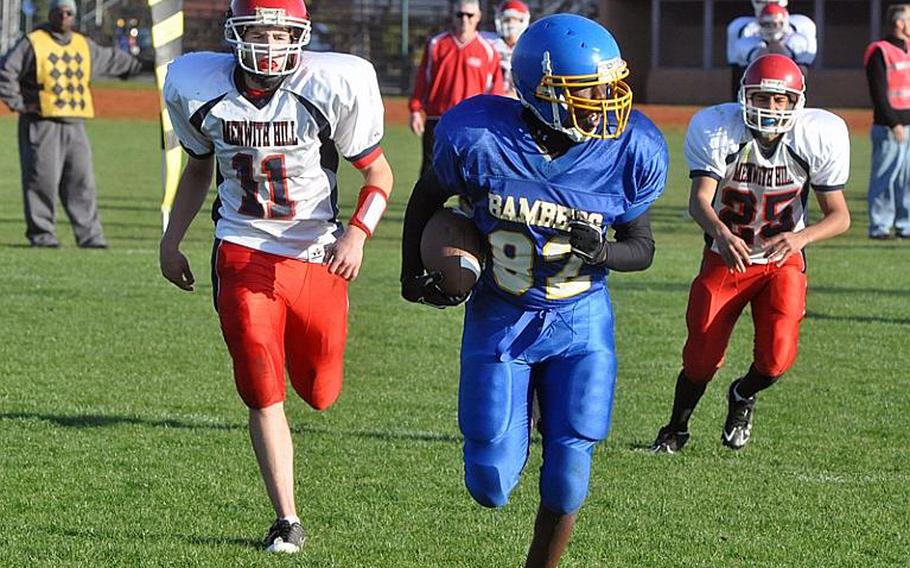 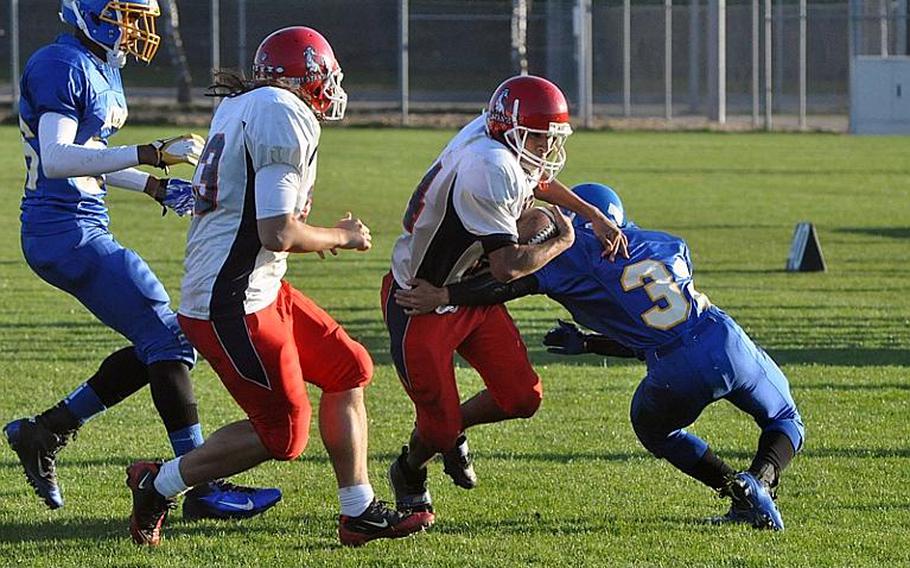 Menwith Hill sophomore Josh Wilcox tries to break free from the Bamberg defense Saturday in the Barons' 42-28 win over the visiting Mustangs in the Division-III semifinal matchup. (Dan Blottenberger/Stars and Stripes) 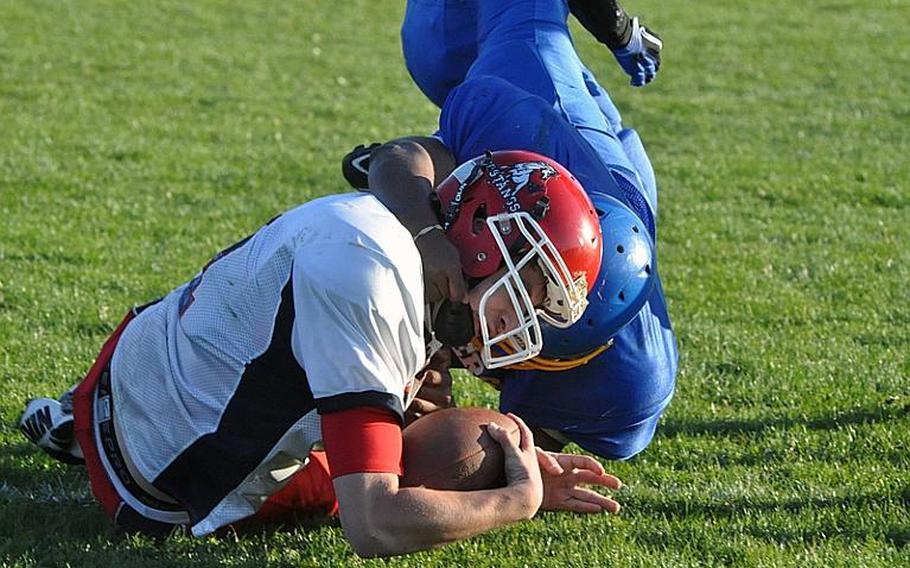 Menwith Hill junior quarterback Schuylar Backlar dives across the goal line Saturday for a 4-yard touchdown to make the score 28-26 Bamberg late in the fourth quarter. The Barons would go onto win 42-28 over the visiting Mustangs in the Division-III semifinal matchup. (Dan Blottenberger/Stars and Stripes) 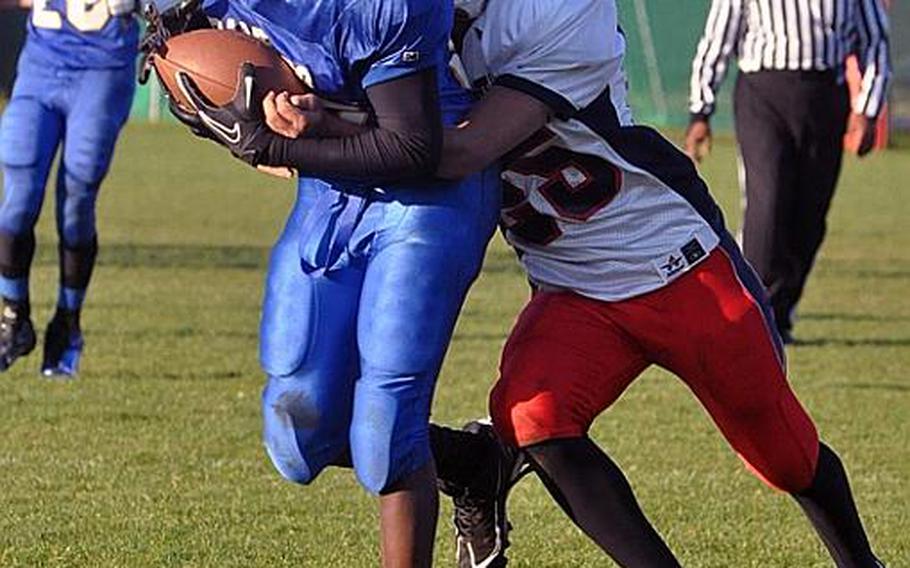 Bamberg junior receiver Andray Gibson catches a 35-yard pass to set up the go ahead score in the fourth quarter for the Barons Saturday. Bamberg won the D-III semi-final matchup 42-28 against visiting Menwith Hill. Gibson finished the game with four catches for 140 yards and scored a touchdown. (Dan Blottenberger/Stars and Stripes) 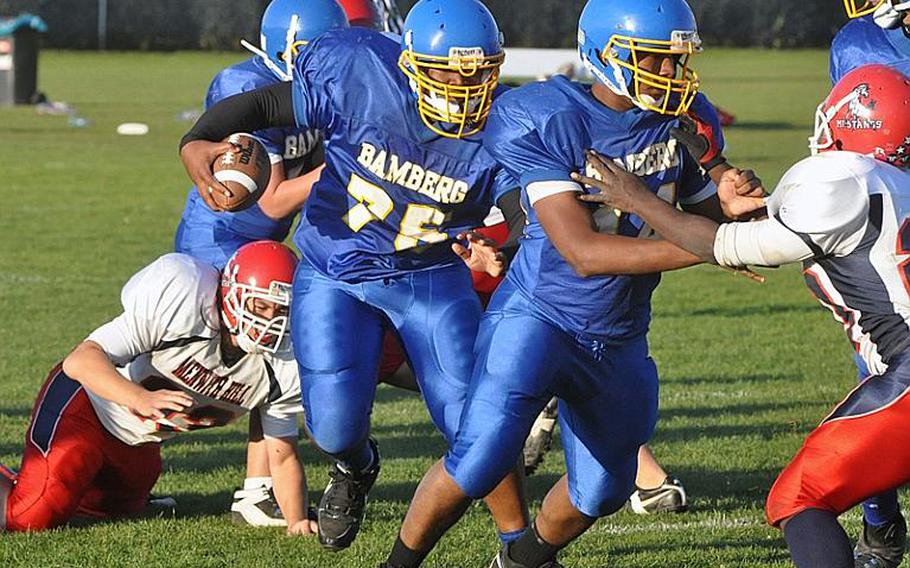 Bamberg sophomore Wally Garcia, a 250-pound fullback/lineman runs in the go ahead score late in the 4th quarter Saturday to give Bamberg a 34-28 lead over visiting Menwith Hill. Bamberg would go onto win the D-III semifinal game 42-28. (Dan Blottenberger/Stars and Stripes) 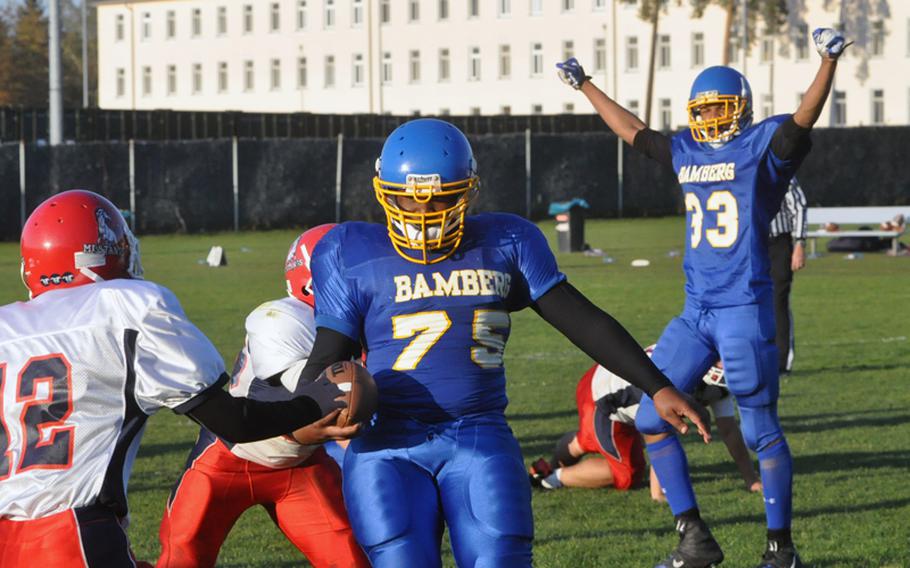 Bamberg sophomore Wally Garcia, a 250-pound fullback/lineman celebrates his 3-yard touchdown run Saturday. The score gave the Barons a 34-28 lead over visiting Menwith Hill late in the fourth quarter. Bamberg would go on to win the D-III semi-final game 42-28. Garcia scored the last two touchdowns for the Barons. (Dan Blottenberger/Stars and Stripes)

Garcia, a 250-pound lineman, took on the position of fullback and ran in the final two scores of the game after the Mustangs leveled the score at 28 with less than 7 minutes to play. Bamberg quarterback Phatanasin Sandod connected with junior receiver Andray Gibson on a 35-yard pass to set up Garcia&rsquo;s go ahead score from 3 yards out with less than 5 minutes in the game.

With the game tied late, Garcia said, he heard his number called and could smell the touchdown coming.

&ldquo;I have been waiting for that touchdown all season long and I finally got it,&rdquo; he said.

&ldquo;I knew Wally was a good runner &ndash; I kept telling coach to put him in some plays,&rdquo; Sandod said.

The coach did and Bamberg will now meet Rota in the Division-III final in Baumholder, Germany, on Nov. 5.

Down by 20 in the second quarter, Sandod was reminded of the previous week&rsquo;s game with Rota, in which the Barons lost 62-7. Needless to say, Sandod was angry with his team&rsquo;s slow start.

&ldquo;I knew that to keep us going in the game we needed to calm down and play our positions,&rdquo; he said. Sandod wound up with 220 yards passing in the game and was a part of three touchdowns and six extra points.

On the Barons&rsquo; first possession of the 2nd half they marched 71 yards for a score that was capped on a 39-yard pass by Sandod to Gibson. Gibson finished the game with four catches for 140 yards.

The Barons were up 28-20 well into the fourth quarter before Backlar led his team back into the game with a 4-yard score. He then connected on the 2-point conversion with Ben Milam to tie the game.

The win did not come easy for the Barons, who were hosting the Mustangs for the second time this season. The two teams met Sept. 24 and Bamberg walked away with a decisive 31-6 win. The Mustangs came out early to prove they would not go silently into the off season.

The game started with an onside kick recovery by the Mustangs. Three plays later, Bamberg sophomore linebacker Tracy Crockett nabbed an interception off of quarterback Schuyler Backlar. On the very next play, the Mustangs recovered a Sandod fumbled snap at mid field.

Backlar got his revenge by connecting with receiver Josh Wilcox on a 37-yard pass bringing the Mustangs down to the Bamberg 2-yard-line to set up Backlar&rsquo;s first score of the game. On Bamberg&rsquo;s next possession, it fumbled again and Backlar recovered. Bamberg got the ball back only to have a punt blocked deep in its own territory. That set up Backlar&rsquo;s second score from 2 yards out.

Backlar wasn&rsquo;t finished yet. At the start of the 2nd quarter, he scored from 51-yards out to give the Mustangs a 20-point lead.

The Mustangs missed the extra point and went down hill from there as Bamberg began their comeback.

The Bamberg defense led by senior Michael &ldquo;Juice&rdquo; Johnson, who had 15 tackles and an interception.